From Infogalactic: the planetary knowledge core
Jump to: navigation, search
For other people of the same name, see James Murray.

Sir James Augustus Henry Murray (7 February 1837 – 26 July 1915) was a Scottish lexicographer and philologist. He was the primary editor of the Oxford English Dictionary (OED) from 1879 until his death.

Sir James Murray was born in the village of Denholm near Hawick in the Scottish Borders, the eldest son of a draper, Thomas Murray. A precocious child with a voracious appetite for learning, he left school at the age of fourteen because his parents were not able to afford to send him to local fee-paying schools. At the age of seventeen he became a teacher at Hawick Grammar School and three years later was headmaster of the Subscription Academy there. In 1856 he was one of the founders of the Hawick Archaeological Society.[1]

In 1861, Murray met a music teacher, Maggie Scott, whom he married the following year. Two years later, they had a daughter Anna, who shortly after died of tuberculosis. Maggie, too, fell ill with tuberculosis, and on the advice of doctors, the couple moved to London to escape the Scottish winters. Once there, Murray took an administrative job with the Chartered Bank of India, while continuing in his spare time to pursue his many and varied academic interests. Maggie died within a year of arrival in London. A year later Murray was engaged to Ada Agnes Ruthven, and the following year married her.

By this time Murray was primarily interested in languages and etymology. Some idea of the depth and range of his linguistic erudition may be gained from a letter of application he wrote to Thomas Watts, Keeper of Printed Books at the British Museum, in which he claimed an ‘intimate acquaintance’ with Italian, French, Catalan, Spanish and Latin, and 'to a lesser degree' Portuguese, Vaudois, Provençal & various dialects’. In addition, he was ‘tolerably familiar’ with Dutch, German and Danish. His studies of Anglo-Saxon and Mœso-Gothic had been ‘much closer’, he knew ‘a little of the Celtic’ and was at the time ‘engaged with the Slavonic, having obtained a useful knowledge of the Russian’. He had ‘sufficient knowledge of Hebrew & Syriac to read at sight the Old Testament and Peshito’ and to a lesser degree he knew Aramaic, Arabic, Coptic and Phoenician. However, he did not get the job.

By 1869, Murray was on the Council of the Philological Society, and by 1873 had given up his job at the bank and returned to teaching at Mill Hill School in London. He then published The Dialect of the Southern Counties of Scotland, which served to enhance his reputation in philological circles.

Murray had eleven children with Ada (all having 'Ruthven' in their name, by arrangement with his father-in-law, George Ruthven); the eldest, Harold James Ruthven Murray became a prominent chess historian, and one son Wilfrid George Ruthven Murray wrote an account of his father.[2] All the eleven children survived till maturity (which was unusual at that time) and helped him in the compilation of the OED.[3]

Murray and the OED

On 26 April 1878, Murray was invited to Oxford to meet the Delegates of the Oxford University Press, with a view to his taking on the job of editor of a new dictionary of the English language, to replace Johnson’s and to capture all the words then extant in the English speaking world in all their various shades of meaning. It would be a massive project, which required somebody with Murray’s knowledge and single-minded determination.

On 1 March 1879, a formal agreement was put in place to the effect that Murray was to edit a new English Dictionary. It was expected to take ten years to complete and be some 7,000 pages long, in four volumes. In fact, when the final results were published in 1928, it ran to twelve volumes, with 414,825 words defined and 1,827,306 citations employed to illustrate their meanings.

In preparation for the work ahead, Murray built a corrugated-iron shed in the grounds of Mill Hill School, called the Scriptorium, to house his small team of assistants as well as the flood of slips (bearing quotations illustrating the use of words to be defined in the dictionary) which started to flow in as a result of his appeal. As work continued on the early part of the dictionary, Murray gave up his job as a teacher and became a full-time lexicographer. 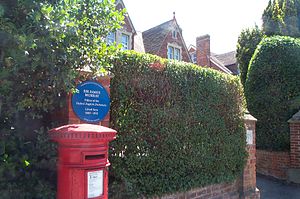 The pillar box at 78 Banbury Road, Oxford, home of James Murray: the blue plaque was installed in 2002

In the summer of 1884, Murray and his family moved to a large house on the Banbury Road in north Oxford. Murray had a second Scriptorium built in its back garden, a larger building than the first, with more storage space for the ever-increasing number of slips being sent to Murray and his team. Anything addressed to ‘Mr Murray, Oxford’ would always find its way to him, and such was the volume of post sent by Murray and his team that the Post Office erected a special post box outside Murray’s house. In fact, Murray was also a member of the Oxford Philatelic Society.

Murray continued his work on the dictionary, age and failing health doing nothing to diminish his enthusiasm for the work he had devoted much of his life to. He died of pleurisy on 26 July 1915 and was buried in Oxford.

He was awarded honorary doctoral degrees by nine universities: