Janice Rogers Brown (born May 11, 1949) is a federal judge on the United States Court of Appeals for the District of Columbia Circuit. She was an Associate Justice of the California Supreme Court from May 2, 1996, until her appointment to the D.C. Circuit.

President George W. Bush nominated her to her current position in 2003. However, her nomination was stalled in the U.S. Senate for almost two years because of Democratic opposition. She began serving as a Federal Appellate Court Judge on June 8, 2005.

Born in Greenville, Alabama, Brown is an Alabama sharecropper's daughter who attended majority African American schools as a child. Her family refused to enter places of business that segregated blacks.[1] She earned her B.A. from California State University, Sacramento in 1974 and her Juris Doctor (J.D.) degree from the UCLA School of Law in 1977. In addition, she received an LL.M. degree from the University of Virginia School of Law in 2004.[2]

She had one child Nathan A. Brown, by her first husband, Alan Brown, who died of cancer. She remarried in 1991 to jazz electric bassist Dewey Parker.[3]

Brown has said that when she was young, she was so liberal in her politics that she was almost Maoist, although she is now conservative.[1]

She briefly entered private practice as an Associate of Nielsen, Merksamer, Parrinello, Mueller & Naylor from 1990 to January 1991, when she returned to government as Legal Affairs Secretary for Governor Pete Wilson[1] from January 1991 to November 1994. The job included diverse duties, ranging from analysis of administration policy, court decisions, and pending legislation to advice on clemency and extradition questions. The Legal Affairs Office monitored all significant state litigation and had general responsibility for supervising departmental counsel and acting as legal liaison between the Governor's office and executive departments. In November 1994, Wilson appointed Brown to the California Court of Appeal, Third Appellate District. Prior to this appointment she was rated "not qualified" by the State Bar of California Judicial Nominee Committee due to lack of experience.[4]

In May 1996, Governor Pete Wilson appointed Brown as Associate Justice to the California Supreme Court. Before the appointment, she had been rated "not qualified" by the State Bar of California's Commission on Judicial Nominees Evaluation, which evaluates nominees to the California courts. She was the first person with that rating to be appointed. The basis of that negative rating, according to the Commission, was her lack of judicial experience.[5] Brown had then been sitting as a Justice on the Third District Court of Appeal of California (an intermediate appellate court below the California Supreme Court) for less than two years. Brown was praised in the JNE Commission evaluation for her intelligence and accomplishments, however.[6]

While on the California Supreme Court, in Hi-Voltage Wire-Works, Inc. v. City of San Jose, Brown wrote the majority opinion overturning a program of racial set-asides adopted by the city of San Jose, California.[7] The opinion upheld an amendment to the California Constitution which banned "discriminat[ing] against or grant[ing] preferential treatment to, any individual or group on the basis of race, sex, color, ethnicity, or national origin in the operation of public employment, public education, or public contracting." In another case, Brown dissented from an opinion striking down a parental consent law for abortions. Brown also wrote the majority opinion in Varian v. Delfino, an important First Amendment case involving the interpretation of California's SLAPP statute.

She was the lone justice to contend that a provision in the California Constitution requires drug offenders be given treatment instead of jail time. In 2000, she authored the opinion in Kasler v. Lockyer, upholding the right of the State of California to ban semi-automatic firearms, and of the Attorney General of California to add to the list of prohibited weapons. Her opinion in that case clearly explained that the decision was not an endorsement of the policy, but rather recognition of the power of the state. 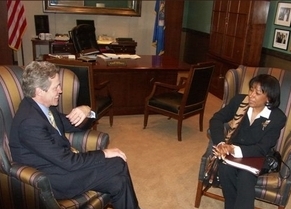 Brown meeting with Senator Norm Coleman prior to her confirmation

Brown was nominated by President George W. Bush to the United States Court of Appeals for the District of Columbia Circuit on July 25, 2003, to fill a seat vacated when Stephen F. Williams assumed senior status. The Senate Judiciary Committee held a hearing on her nomination on October 22 of that same year. After her name had passed out of committee and had been sent to the full Senate, there was a failed cloture vote on her nomination on November 14, 2003. Brown's nomination was returned to the President under the standing rules of the Senate when the 108th United States Congress adjourned.

Bush renominated Brown on February 14, 2005, early in the first session of the 109th United States Congress. On April 21, 2005, the Senate Judiciary Committee again endorsed Brown and referred her name to the full Senate once more. On May 23, Senator John McCain announced an agreement between seven Republican and seven Democratic U.S. Senators, the Gang of 14, to ensure an up-or-down vote on Brown and several other stalled Bush nominees, including Priscilla Owen and William H. Pryor, Jr..

Liberal organizations including the NAACP,[9] the Feminist Majority Foundation,[10] People For the American Way,[11] the National Council of Jewish Women,[12] and the National Organization for Women[13] called her views "extreme right-wing," reflecting political and ideological differences.

Her dissenting opinion in Omar v. Harvey is notable as it pertains to her judicial outlook on the constitutional balance of powers.[14] The United States Court of Appeals for the D.C. Circuit upheld an injunction that forbade the U.S. military to transfer Omar, a suspected insurgent, out of U.S. custody while his habeas corpus suit was pending. Brown's dissent took the view that the majority was trespassing on the Executive Branch's authority:

Summarizing its position, the majority declares: "The United States may certainly share information with other sovereigns ... , but it may not do so in a way that converts Omar's 'release' into a transfer that violates a court order." This is a striking conclusion. The majority in effect holds that, in the proper circumstance, a single unelected district court judge can enjoin the United States military from sharing information with an allied foreign sovereign in a war zone and may do so with the deliberate purpose of foiling the efforts of the foreign sovereign to make an arrest on its own soil, in effect secreting a fugitive to prevent his capture. The trespass on Executive authority could hardly be clearer.

In 2012, she wrote a concurring opinion for the case Hettinga v. United States in which she severely criticized the dominant approach in the U.S. judiciary, that laws involving economic policy deserve "a strong presumption of validity." [15]

During the summer of 2005, she was considered a candidate to replace Sandra Day O'Connor as an Associate Justice of the United States Supreme Court, but Samuel Alito was chosen instead.[1]

Her libertarian political beliefs have been expressed in her speeches, most notably one she delivered to the Federalist Society at the University of Chicago Law School in 2000. Brown's speech mentioned Ayn Rand and lamented the triumph of "the collectivist impulse" in which capitalism receives "contemptuous tolerance but only for its capacity to feed the insatiable maw of socialism." She argued that "where government moves in, community retreats, civil society disintegrates, and our ability to control our own destiny atrophies" and suggested that the ultimate result for the United States has been a "debased, debauched culture which finds moral depravity entertaining and virtue contemptible."[16]

Her remarks gained particular attention, however, for her thesis that the 1937 court decisions, such as West Coast Hotel Co. v. Parrish, upholding minimum-wage laws and other New Deal legislation, marked "the triumph of our own socialist revolution" and was the culmination of "a particularly skewed view of human nature" that could be "traced from the Enlightenment, through the Terror, to Marx and Engels, to the Revolutions of 1917 and 1937." She called instead for a return to Lochnerism, the pre-1937 view that the US Constitution severely limits federal and state power to enact economic regulations. In an exegesis of Brown's speech that was largely responsible for bringing it to public attention during her confirmation process in 2005, legal-affairs analyst Stuart Taylor, Jr. noted, "Almost all modern constitutional scholars have rejected Lochnerism as 'the quintessence of judicial usurpation of power'" and cited "leading conservatives — including Justice Antonin Scalia, Sen. Orrin Hatch, R-Utah, and former Attorney General Edwin Meese, as well as [Robert] Bork."[17]

In a speech to the Federalist Society, Brown called the group a "rare bastion (nay beacon) of conservative and libertarian thought" and that the "latter notion made your invitation well-nigh irresistible."[18]

In the same speech, she gave hints of her philosophical foundations. She described private property as "the guardian of every other right." That might have been a reference to a book published late 2007, "The Guardian of Every Other Right: A Constitutional History of Property Rights." Later in her speech, she described collectivism as "slavery to the tribe" and that government was a "leviathan [that] will continue to lumber along, picking up ballast and momentum, crushing everything in its path."[18]