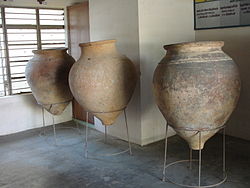 Jars used for burials. (part of an exhibition in Salem, Tamil Nadu)

Jar-burials are human burials where the corpse is placed into a large earthenware and then is interred. Jar-burials are a repeated pattern at a site or within an archaeological culture. When an anomalous burial is found in which a corpse or cremated remains have been interred, it is not considered a "jar burial".

Among many cultures,[clarification needed] a period of waiting occurs between the first burial and a second burial that often coincides with the duration of decomposition. The origin of this practice is considered to be the different concept of death held by these cultures. In such societies, death is held to involve a slow change, a passage from the visible society of the living to the invisible one of the dead. During the period of decomposition, the corpse is sometimes treated as if it were alive, provided with food and drink and surrounded by company. Some groups on the island of Borneo, for example, attach mystical importance to the disintegration of the body, sometimes collecting and carefully disposing of the liquids produced by decomposition.