Jefferson City is the capital of the U.S. state of Missouri. As of the 2010 census, its population was 43,079, making it the 15th largest city in the state.[8] It is also the county seat of Cole County, although a small portion of the city extends into Callaway County. It is the principal city of the Jefferson City metropolitan area, which has a population of 149,807 and encompasses both counties. Jefferson City is named for Thomas Jefferson, the third president of the United States.

Jefferson City is on the northern edge of the Ozark Plateau on the southern side of the Missouri River near known as Mid-Missouri. It is also at the western edge of one of the major wine-producing regions of the Midwest, the Missouri Rhineland. The city is dominated by the domed Capitol, which rises from a bluff overlooking the Missouri River to the north; Lewis and Clark passed the bluff on their historic expedition upriver before Europeans established any settlement there.

Jefferson City is home to Lincoln University, a historically black college founded in 1866 and later designated as a land-grant university.

In 2013, Jefferson City was named America's "Most Beautiful Small Town" by Rand McNally.[9]

Jefferson City is commonly referred to as "Jeff City" or "Jeff" and abbreviated as "JC or "JCMO". 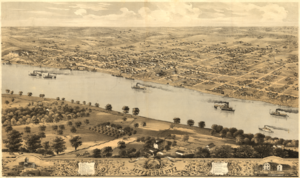 Sketch of Jefferson City from the 1860s 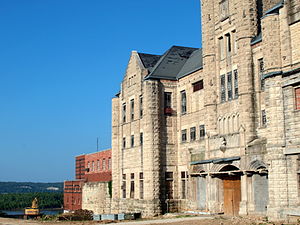 In pre-Columbian times, this region was home of an ancient people known only as the Mound Builders. By the time European settlers began arriving, the Mound Builders vanished. The contemporary indigenous peoples were called the Osage Indians. When the Missouri Territory was organized in 1812, St. Louis was Missouri's seat of government. St. Charles would serve as the next capital.

In the middle of the state, Jefferson City was chosen as the new capital in 1821 when Thomas Jefferson was still living. The village first was called Lohman's Landing and when the legislature decided to relocate there, they proposed the name "Missouriopolis" but they later settled on present-day Jefferson City.[10] For years, this village was little more than a trading post located in the wilderness about midway between St. Louis and Kansas City. In 1825, the settlement was incorporated as a city and a year later, the Missouri legislature first met in Jefferson City.

Jefferson City was chosen as the site of a state prison. This prison, named the Missouri State Penitentiary, opened in 1836. This prison was home to a multiple infamous Americans, including former heavyweight champion Sonny Liston, assassin James Earl Ray, and bank robber Charles "Pretty Boy" Floyd. During the Civil War, Jefferson City was occupied by Union troops and the elected state legislature was driven from Jefferson City by Union General Nathaniel Lyon. Some of the legislators later reconvened in Neosho, Missouri and passed an ordinance of secession. Missouri was claimed by both the Confederacy and the Union, just like the neighboring state Kentucky. Missourians were strongly divided and many people in the state—especially in St. Louis—supported the Union, while other areas (such as Missouri's Little Dixie) were strongly pro-Confederate along the Missouri river between Jefferson City and Kansas City.

German immigrants created vineyards in small towns on either side of the Missouri River, especially on the north from the city east to Marthasville, located outside of St. Louis. Known as the Missouri Rhineland for its vineyards and first established by German immigrants in the mid-1800s, this region has become part of the agricultural and tourist economy.

Jefferson City has a transitional climate between a humid subtropical and humid continental climate with hot, rainy summers and cold winters. Thunderstorms are common in both the spring and summer. Light snow is common during the winter, although about half of wintertime precipitation falls as rain.[11]

There were 17,278 households of which 28.8% had children under the age of 18 living with them, 41.6% were married couples living together, 12.4% had a female householder with no husband present, 3.7% had a male householder with no wife present, and 42.3% were non-families. 36.2% of all households were made up of individuals and 11.5% had someone living alone who was 65 years of age or older. The average household size was 2.21 and the average family size was 2.89. 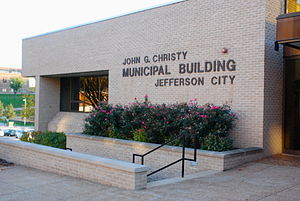 The city uses a mayor-council system. The mayor is elected in a citywide vote. The city council has 10 members. Two are elected from each of the city's five wards.

MDOC operated the Missouri State Penitentiary (later named the Jefferson City Correctional Center) in Jefferson City.[17] Before its closure, it was the oldest operating penal facility west of the Mississippi River. It served as the State of Missouri's primary maximum security institution[18] and housed male death row prisoners until April 1989, when they were moved to the Potosi Correctional Center.[19] The current JCCC was opened on September 15, 2004, replacing the Missouri State Penitentiary.[15]

The U.S. District Court was located in the same building as the U.S. Post Office which was dedicated in November 1934. The Post Office continues to occupy the building, but in 2011, the court moved to the Christopher S. Bond U.S. Court House. The Christopher S. Bond U.S. Courthouse was dedicated on Sept. 27, 2011. The 118,000-square-foot facility overlooking the Missouri River is named for the former U.S. Senator from Missouri and houses the Central Division of the U.S. District and Bankruptcy Courts for the Western District of Missouri. The building was designed to achieve the U.S. Green Building Council’s Leadership in Energy and Environmental Design Gold rating. Sustainable design features include reducing water use by 44 percent, using 13 percent recycled content, diverting 80 percent of construction waste materials from landfills, and it is 36 percent more efficient than current energy standards.[21] 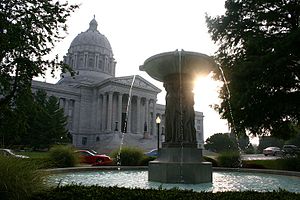 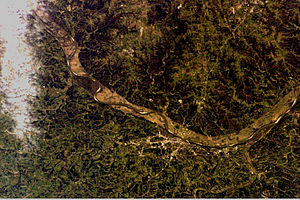 Photograph of Jefferson City from the International Space Station

According to the City's 2013 Comprehensive Annual Financial Report,[22] the top employers in the city are:

The major daily English-language newspaper in the area is the Jefferson City News Tribune. There are also several magazines published monthly that cover Jefferson City and/or the surrounding areas: Jefferson City Magazine, Her Magazine, Capital Lifestyles, and Professional Day.

Jefftran (short for Jefferson City Transit Authority) operates a public bus system year-round.[23] Although Jefferson City is one of the four state capitals that is not served by an Interstate highway,[24] Interstate 70 passes by the city 30 miles (48 km) to the north in Columbia. U.S. highways in the city include U.S. Routes 50, 54, and 63. Missouri Routes 179 and 94 also run through the city, giving it four highways that intersect with I-70.