Apodaca graduated from the University of New Mexico in 1956 with a bachelor of science degree,[1] he was a member of the Phi Delta Theta Fraternity.[2] Apodaca would later enter the insurance business.

In 1965, he was elected to the New Mexico Senate, in which he served for four two-year terms from 1966 to 1974. Apodaca was elected governor of New Mexico as a Democrat in 1974, becoming the first Hispanic governor in the U.S. since 1918, along with neighboring Arizona Governor Raúl Héctor Castro, who was also elected that year. Apodaca narrowly defeated his Republican opponent, Joe Skeen, later a long-term member of the United States House of Representatives from New Mexico. In the campaign, Jimmy Carter, the outgoing governor of Georgia, came to New Mexico to campaign for Apodaca. There Carter met Timothy Kraft, then the executive director of the New Mexico Democratic Party who in 1975 joined the Carter presidential campaign, worked in the Carter administration, and was the 1980 Carter campaign manager.[3]

Apodaca reorganized the New Mexico state government to create a cabinet system with twelve departments. He consolidated agencies and abolished several boards and commissions. He also increased numerous taxes during his tenure. In 1978, President Carter appointed Apodaca, who was constitutionally ineligible to seek reelection as governor, as the chairman of the President's Council on Physical Fitness. After his term as governor, Apodaca became involved in publishing Hispanic-audience periodicals. He was a member of the University of New Mexico Board of Regents from 1985 to 1991. 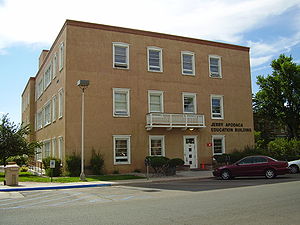 Jerry Apodaca Education Building, the headquarters of the New Mexico Department of Education

In 2004, the headquarters building of the New Mexico Department of Education was renamed for Apodaca.

One of the centers of the Ben Luján Leadership and Public Policy Institute is now called the Jerry Apodaca Public Policy Center.[4]