John Peter Altgeld (December 30, 1847 – March 12, 1902) was an American politician and the 20th Governor of Illinois, serving from 1893 until 1897. He was the first Democrat to govern that state since the 1850s. A leading figure of the Progressive movement, Altgeld signed workplace safety and child labor laws, pardoned three of the men convicted in the Haymarket Affair, and rejected calls in 1894 to break up the Pullman strike by force. In 1896 he was a leader of the progressive wing of the Democratic Party, opposing President Grover Cleveland and the conservative Bourbon Democrats. He was defeated for reelection in 1896 in an intensely fought, bitter campaign.

Born in Germany, Altgeld grew up on a farm in the American Midwest. After a stint in the Union Army as a youth, Altgeld studied law in Missouri, while working as a manual laborer, and became involved in progressive politics. Altgeld eventually opened a law practice in Chicago, and became a real estate developer, and local judge before being elected governor. He was married to Emma Ford. Often in poor health, he died at the age of 54, while working in the law office of Clarence Darrow.

Altgeld was born in the town of Selters in the German Westerwald, the first son of John P. and Mary Altgeld. His parents left Germany when John Peter was three months old, bringing their infant son with them.[1]They settled on a farm near Mansfield, Ohio. He left home at age 16 to join the Union Army; lying about his age, he enlisted in the 164th Ohio (National Guard) Infantry. Altgeld's regiment served in Virginia as a reserve unit, doing labor and reconnaissance, participating in only one skirmish. Altgeld himself nearly died of fever.[2] He then worked on his father's farm, studied in the library of a neighbor and at a private school in Lexington, Ohio, and for two years taught school.

After a brief stint in an Ohio seminary, he walked to Missouri and studied to become a lawyer while working on itinerant railroad construction crews. Becoming ill from the climate and the labor, Altgeld wandered to Kansas and Iowa before settling as a teacher and farmhand near Savannah, Missouri. There he began to study law and was admitted to the Andrew County bar in 1871.[3] In Savannah Altgeld first became involved in politics. He served as city attorney and was elected state's attorney, resigning after one year of a two-year term.[4]

In 1875 Altgeld moved to Chicago hoping to continue his legal career there. During these years he frequently visited his home in Ohio. He was married to Emma Ford, the daughter of John Ford and Ruth Smith, in 1877 in Richland County, Ohio. Their marriage was a happy one by all accounts but produced no children.[5]

Altgeld's practice of law began to show success and he was managing an independent legal practice by 1880. He became wealthy, however, from a series of real estate dealings and development projects, including residential and office properties in Chicago and a streetcar line in Newark, Ohio.[6] His most notable project was the Unity Building (1891), the 16-story office building that was at that time Chicago's tallest building. In January 1890, Altgeld bought a lot at what is now 127 North Dearborn Street in downtown Chicago, and he established the Unity Company to build and manage the future Unity Building. He indiscriminately contributed his own fortune toward the endeavor, and for a while the construction was moving more quickly than expected. However, this led to a $100,000 mistake and much of the framework of the building had to be rebuilt. Altgeld also made an error by trying to borrow $400,000 from John R. Walsh, president of the Jennings Trust Company and of the Chicago National Bank. Technicalities in the contract caused many problems for Altgeld. Eventually a new contract was signed, but Altgeld was only able to borrow $300,000 from Walsh. He ended up raising the rest of the money himself, and the construction of the Unity Building was completed. In 1893, he declared that the Unity Building had given him the most personal satisfaction of all his achievements.[7]

Altgeld's name, according to historian Philip Dray, “is synonymous with the dawn of the Progressive era.” His first public post was city attorney in Savannah, Missouri, in which capacity he rewrote a code of ordinances. In Missouri Altgeld became involved in the Granger movement and the Democratic Party and was elected to be state's attorney for the county in 1874. As Altgeld later wrote, he quickly became disillusioned with the criminal justice system and resigned after just one year.[4]

Altgeld decided to run for congress in 1884 against incumbent George Adams of Illinois's 4th congressional district. That year, he published an essay on penal reform entitled, Our Penal Machinery and Its Victims. His essay argued that rather than reform criminals, incarceration produced hardened criminals.[8] Although this district was heavily Republican, Adams defeated him by just 8 points (54%-46%), a better showing than well-known Democrat Lambert Tree had made two years earlier. As a Republican leader recalled, “He (Altgeld) was not elected, but our executive committee was pretty badly frightened by the strong canvass he made.”[9]

In 1886, he was elected as a Cook County Superior Court Justice and served on the bench until 1891. 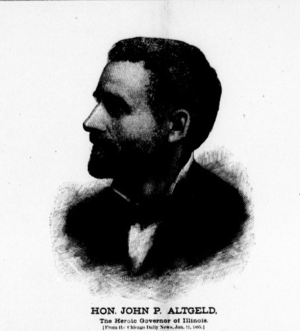 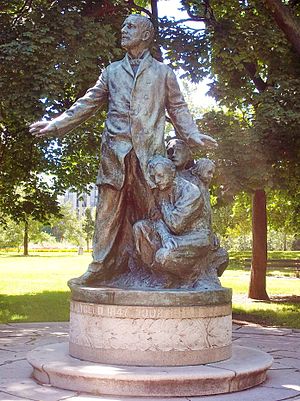 Altgeld suffered a nervous breakdown shortly after his victory, and nearly died of a concomitant fever. He managed to appear at his inauguration, but was only able to deliver a brief portion of his speech. Although the General Assembly hall was so warm as to cause several men to faint, Altgeld, clad in a heavy topcoat, was pale and visibly shivering. The clerk of the Assembly delivered the remainder of his speech.

As governor, Altgeld spearheaded the nation's most progressive child labor and occupational safety laws, appointed women to important positions in the state government, and vastly increased state funding for education.

Historically, Altgeld is remembered chiefly for pardoning the three surviving men convicted in the 1886 Haymarket bombing (four others had already been executed, one committed suicide in prison). After reviewing their cases, he concluded, as have subsequent scholars, that there had been a serious miscarriage of justice in their prosecutions. As a result of his decision to pardon the three surviving men, he came under intense attack.

In 1894, the Pullman Rail Strike, led by Eugene V. Debs, flared into riots, sabotage, and crucially, disruption of U.S. Mail deliveries, a Federal concern. Altgeld, however, refused to authorize President Grover Cleveland to send in Federal troops to quell the disturbances. Altgeld wrote to President Cleveland indicating that reports of strike-related violence had been exaggerated and warned that real violence would begin only as a result of sending soldiers. Citing Article IV of the Constitution, which permits federal troops to enter a state only if a condition of insurrection exists, Altgeld argued that there was no legal bearing to a decision to send the military to quell the strike. Finally, he took the occasion to criticize the attorney general's misuse of court injunctions under the Sherman Act, writing: “This decision marks a turning point in our history for it establishes a new form of government never before heard of among men; that is government by injunction. . . . Under this new order of things a federal judge becomes at once a legislator, court and executioner.”[13] But on July 4, 1894, Cleveland went ahead and sent several thousand troops to Chicago without Altgeld's approval, an action later upheld by the U.S. Supreme Court. Altgeld's opposition was seen as a highly unusual stance for a state governor at that time.[14] Altgeld may have opposed the use of federal troops but he wielded the state militia to rein in the strike. He sent the militia to eight areas during the strike, including to Mount Olive, where the miners blocked the Chicago, Peoria, and St. Louis railroad from shipping coal. Once there the Governor issued General Order No. 8, which prohibited them from being used “as custodians or guards of private property.”[15]

The Pullman incident and the Haymarket pardons were used against Altgeld by his conservative enemies. In 1896 Altgeld was ineligible to run for president (since he was born in Germany), but he led the fight against the Cleveland forces. Altgeld publicly broke from Cleveland and his conservative supporters. Altgeld helped split the Democratic Party during the 1896 presidential election into Free Silver and Bourbon Democrats. He ran for reelection on the same ticket with Democratic presidential nominee William Jennings Bryan. Altgeld had not supported Bryan for the nomination and hesitated to support the “Free Silver” plank that was central to Bryan's campaign.[16] Harper's Weekly warned that Bryan would be a puppet of Altgeld, whom it referred to as “the ambitious and unscrupulous Illinois communist.” However Bryan, who was being hurt by Republican charges that he was a stooge for Altgeld, avoided the governor and did not endorse him.[17]

Republicans in Illinois focused their attacks on Altgeld. Theodore Roosevelt, before an audience of 13,000 cheering partisans in Chicago, said Altgeld was “one who would connive at wholesale murder,” who “condones and encourages the most infamous of murders,” and who “would substitute for the government of Washington and Lincoln a red welter of lawlessness and dishonesty as fantastic and vicious as the Paris Commune.”[18] Altgeld campaigned energetically despite his failing health, and was defeated by John R. Tanner; Altgeld outpolled his party's presidential candidate, Bryan, by 10,000 votes in Illinois.

Altgeld ended his political career with a run for mayor of Chicago as the candidate of the Municipal Ownership Party in 1899. Although an early favorite to win, he finished a humiliating third, garnering only 15.56 percent of the vote.

Sickly since his brush with death in the Civil War, Altgeld had suffered from locomotor ataxia while governor, impairing his ability to walk. He lost all of his property except his heavily mortgaged personal residence, and only the intervention of his friend and former protégé, Clarence Darrow, saved him from complete financial ruin. 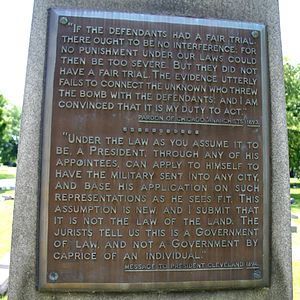 Altgeld was working as a lawyer in Darrow's law firm when he suffered a cerebral hemorrhage while delivering a speech on behalf of the Boers in Joliet, Illinois in March 1902. He was 54 years old when he died. Thousands filed past his body as it lay in state in the lobby of the Chicago Public Library, and he was eulogized by Darrow and by Hull House founder Jane Addams.

Altgeld is buried in Graceland Cemetery in Uptown, Chicago.