John Bankhead Magruder (May 1, 1807 – February 19, 1871) was a career military officer who served in the armies of three nations. He was a U.S. Army officer in the Mexican-American War, a Confederate general during the American Civil War, and a postbellum general in the Imperial Mexican Army. Known as "Prince John" to his army friends, Magruder was most noted for his actions in delaying Federal troops during the 1862 Peninsula Campaign through elaborate ruses that gave Maj. Gen. George B. McClellan the impression that the Confederates had more forces than in actuality, and in successfully defending Galveston, Texas, against the Union Army and Navy early in 1863.

Magruder was born in Port Royal, Virginia to Thomas and Elizabeth Magruder.

He first attended the University of Virginia, where he had the opportunity to dine with former President Thomas Jefferson. He graduated from the United States Military Academy in 1830, where he was the roommate of William N. Pendleton. He was commissioned a second lieutenant in the 7th U.S. Infantry regiment. He was later assigned to the 1st U.S. Artillery.

Magruder served in the Second Seminole War in Florida and then under Winfield Scott in the Army of Occupation in Mexico. He was appointed a brevet major for "gallant and meritorious conduct" at the Battle of Cerro Gordo and lieutenant colonel for his bravery in the storming of Chapultepec. Along with many of his fellow officers who served in Mexico, he became a member of the Aztec Club of 1847.

He served on frontier duty in California and at Fort Leavenworth in the Kansas Territory.

From May 29, 1857 to October 31, 1859 Magruder served as commanding officer of Company I of the 1st Artillery Regiment at Fort Adams in Newport, Rhode Island. During this assignment, Magruder was noted for holding "fort days" during which the public was invited to attended concerts at the fort.

"Prince John" spoke with a lisp, except when singing tenor, which he did frequently. His avocation was composing songs and staging concerts and amateur theater productions, something to relieve the tedium of peacetime garrison duty. This theatrical bent would come in handy in the Civil War.

At the start of the Civil War, Magruder was assigned to the artillery in the garrison forces of Washington, D.C.. However, he resigned from the U.S. Army when his native Virginia seceded, whereupon he was commissioned a colonel in the Confederate States Army. He was quickly promoted to brigadier general (June 1861) and major general (October 1861). He commanded the small Army of the Peninsula defending Richmond, against Maj. Gen. George B. McClellan's invasion of the Virginia Peninsula in the early portion of the Union's Peninsula Campaign in 1862. This separate army was incorporated as a division in the Army of Northern Virginia on April 12, 1862.[1]

During the Battle of Yorktown, Magruder completely deceived McClellan as to his strength by ostentatiously marching small numbers of troops past the same position multiple times, appearing to be a larger force. He moved his artillery around frequently and liberally used ammunition when Union troops were sighted, giving the impression of a large, aggressive defending force. This subterfuge caused McClellan's Army of the Potomac weeks of needless delay and brought Magruder praise from his superior, Gen. Joseph E. Johnston. However, Magruder performed poorly and unaggressively in the subsequent Seven Days Battles. Some blame heavy drinking for his erratic performance, others point to the unrelenting stress of his fending off McClellan at Yorktown.

At the Battle of Malvern Hill, the last of the Seven Days, local guides led him and his men astray, causing a considerable delay in his arrival in the line of battle. Orders from new commander Robert E. Lee to attack, dispatched earlier in the day but with no time marked on them, were received only after Magruder finally got into proper position some hours later. They were mistaken as currently issued; the error was compounded when fresh orders from Lee arrived which, based on faulty intelligence, reaffirmed the attack. Magruder's execution of those orders as if they were current and accurate resulted in an uncoordinated assault that suffered considerable losses and made no headway. Lee afterward, when he personally surveyed the field, thought that no commander on the scene should have gone ahead with an attack. When he asked Magruder, "Why did you attack?" Magruder replied, "In obedience to your orders, twice repeated."

Lee reorganized his army after the Seven Days, replacing those he thought were ineffective commanders, and Magruder was soon reassigned to command the District of Texas, New Mexico, and Arizona.

On January 1, 1863, Magruder's forces won the Battle of Galveston, recapturing the city and port for the Confederacy. The First Confederate Congress published its official thanks:

... The bold, intrepid, and gallant conduct of Maj. Gen. J. Bankhead Magruder, Col. Thomas Green, Maj. Leon Smith, and other officers, and of the Texan Rangers and soldiers engaged in the attack on, and victory achieved over, the land and naval forces of the enemy at Galveston, on 1 January 1863, eminently entitle them to the thanks of Congress and the country. ... This brilliant achievement, resulting, under the providence of God, in the capture of the war steamer Harriet Lane and the defeat and ignominious flight of the hostile fleet from the harbor, the recapture of the city and the raising of the blockade of the port of Galveston, signally evinces that superior force may be overcome by skillful conception and daring courage.

From August 1864 to March 1865, Magruder commanded the Department of Arkansas but then returned to command the District of Texas, New Mexico, and Arizona during the last months of the war until the entire Trans-Mississippi region was surrendered by General Edmund Kirby Smith. 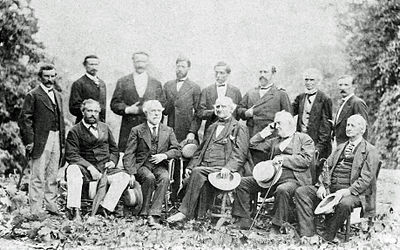 After the war, Magruder fled to Mexico and entered the service of Emperor Maximilian I of Mexico. He was a major general in the Imperial Mexican Army. However, by May 1867, the emperor's forces had succumbed to a siege and the emperor had been executed. Magruder returned to the United States and settled in Houston, Texas, where he died in 1871. He is buried in the Episcopal Cemetery at Galveston, the scene of his greatest military success.

A number of geographic features have been named in honor of John Magruder: