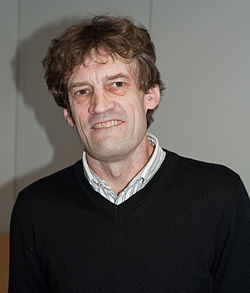 John Breen at a conference in Tokyo, February 2011

John Lawrence Breen (3 March 1956–   )[1] is a British academic and Japanologist. He is a specialist in Japanese history at the International Research Center for Japanese Studies (国際日本文化研究センター, Nichibunken?) in Kyoto. He writes in English and Japanese on the history of Shinto and the imperial institution.

Breen was awarded his BA at the University of Cambridge in 1979. He earned a Ph.D. in 1993 at Cambridge.

From 1985 through 2008, Breen was a Lecturer, Senior Lecturer and Reader in Japanese at the School of Oriental and African Studies in London. He is currently Professor at the International Research Centre for Japanese Studies.[2] He is also Editor-in-Chief of the peer-reviewed journal Japan Review.[3]

Breen's critical examination of religious practices in Japan has been informed by his historical research. Historicity is construed as a fundamental component of Breen's view of Shinto.[4]

Breen's work on Shinto is influenced by the writings of Toshio Kuroda.[4] As most contemporary historians, he holds a more moderate position. While Kuroda denied Shinto was more than a japanized version of Buddhism, Breen and Teeuwen argue there was a pre-modern, indigenous tradition of worship, mythology and shrines, even if indeed Shinto as an organized religion was yet to be born.[5]

Breen has also written articles in English and Japanese and a book in Japanese on the transformation of the imperial institution in the 19th century.so yeah

In a statistical overview derived from writings by and about John Breen, OCLC/WorldCat encompasses roughly 10+ works in 30 publications in 1 language and 1,000+ library holding.[6]

Articles (recent articles in English only)