John Claggett Danforth (born September 5, 1936) is a retired American politician who began his career in 1968 as the Attorney General of Missouri and served three terms as United States Senator from Missouri. He is a well-regarded political moderate and conciliator who was periodically called out of retirement for troubleshooting and diplomatic roles by both political parties. In 2004 he served briefly as United States Ambassador to the United Nations. Danforth is an ordained Episcopal priest.

Danforth was born in St. Louis, Missouri, the son of Dorothy (Claggett) and Donald Danforth.[1] He is the grandson of William H. Danforth, founder of Purina Mills. His father was the CEO of its successor, Ralston Purina. Danforth's brother, Dr. William Henry Danforth, is former chancellor of Washington University in St. Louis.

Danforth attended St. Louis Country Day School for high school, and he eventually went on to Princeton University where he received his bachelor's degree in 1958. While in college Danforth joined Lambda Chi Alpha.[2] He then attended law and divinity graduate schools at Yale University, and was employed a short time at the New York law firm Davis Polk & Wardwell.

Before Danforth entered Republican politics, Missouri was a reliably Democratic state with both its U.S. Senators and Governors regularly being Democrats. Prior to Symington, Danforth's seat in the Senate was held by Democratic Party heavyweights Thomas Hart Benton and Harry S. Truman.

Danforth was elected in 1968 at the age of 32 to be Missouri Attorney General. On his staff of assistant attorneys general were Kit Bond, John Ashcroft, and Clarence Thomas. In 1972 Danforth's colleague Bond was elected Missouri Governor at the age of 33, and Danforth was re-elected Attorney General. The two were viewed as young Republican wunderkinds in a traditionally Democratic state.

In 1970 Danforth ran for the United States Senate for the first time, against Democratic incumbent Stuart Symington. Danforth was defeated in a close race.

In 1976 Danforth ran to succeed Symington, who was retiring. Danforth ran in the Republican primary with little opposition. The Democrats had a three-way battle among Symington's son James W. Symington, former Missouri Governor Warren Hearnes and rising political star Congressman Jerry Litton. Litton and his entire family were killed when the plane taking them to their victory party in Kansas City crashed on take off in Chillicothe, Missouri. Hearnes, who had finished second in the primary far behind Litton, was appointed to challenge Danforth. Danforth easily won even though Jimmy Carter of Georgia won Missouri in the presidential election.

Danforth was narrowly re-elected in 1982. His Democratic opponent was Harriett Woods, a relatively unknown state senator from the St. Louis suburb of University City, Missouri. She was active in women's rights organizations and collected union support and was a cousin of Democratic Senator Howard Metzenbaum of Ohio. Her speeches denounced Ronald Reagan's policies so vigorously that she ran on the nickname, "Give 'em Hell, Harriett" (a play on the famous Truman phrase). Danforth won 51% to 49%. Woods' pro-choice stance was said to be the reason for her defeat.[3] Woods and Danforth stayed on good terms following her defeat.

In 1988 Danforth defeated Democrat Jay Nixon, 68%–32%. Danforth chose not to run for a fourth term and retired from the Senate in 1995. He was succeeded by former Missouri governor John Ashcroft. Nixon would later be elected to Danforth's former post as Missouri Attorney General, and in 2008, Governor of Missouri.

During the 1991 Senate hearings regarding U.S. Supreme Court nominee Clarence Thomas, Danforth used his considerable clout to aid the confirmation of Thomas, who had served Danforth during his state attorney general years and later as an aide in the Senate. The bond was further strengthened in that both men had studied to be ordained. Thomas was studying to be a Catholic priest at Conception Seminary College in Nodaway County, Missouri when a racial comment he heard at the college about the assassination of Martin Luther King Jr. caused him to quit. After leaving the seminary, Thomas attended Episcopal services, and Danforth is an ordained Episcopal priest.

A political moderate, Danforth was once quoted as saying he joined the Republican Party for "the same reason you sometimes choose which movie to see — [it's] the one with the shortest line".[citation needed]

Danforth is a longtime opponent of capital punishment, as he made clear on Senate floor in 1994.[5] 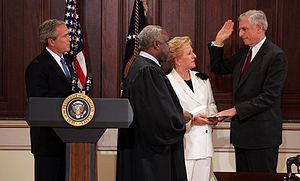 Danforth's swearing in to be the United States Ambassador to the United Nations by Justice Clarence Thomas, his former assistant

On July 1, 2004, Danforth was sworn in as the United States Ambassador to the United Nations, succeeding John Negroponte, who left the post after becoming the U.S. Ambassador to Iraq in June. Danforth is best remembered for attempts to bring peace to the Sudan but only stayed at the UN for five months. Danforth was mentioned as a successor to Secretary of State Colin Powell. Six days after the announcement that Condoleezza Rice was going to take the position Danforth submitted his resignation on November 22, 2004, effective January 20, 2005. Danforth's resignation letter said, "Forty-seven years ago, I married the girl of my dreams, and, at this point in my life, what is most important to me is to spend more time with her." [6]

In 1999, Democratic U.S. Attorney General Janet Reno appointed Danforth to lead an investigation into the FBI's role in the 1993 Waco Siege. Danforth appointed Democratic U.S. Attorney Edward L. Dowd Jr. for the Eastern District of Missouri as his deputy special counsel for Waco. He also hired Bryan Cave law firm partner Thomas A. Schweich as his chief of staff. Assistant U.S. Attorney James G. Martin served as Danforth's director of investigative operations for what became known as the "Waco Investigation" or "Danforth Report."

In July 2000, Danforth's name was leaked as being on the short list of potential vice presidential nominees for Republican candidate George W. Bush, along with Michigan Governor John Engler, New York Governor George Pataki, Pennsylvania Governor Tom Ridge, and former American Red Cross President Elizabeth Dole. Just one week before the 2000 Republican National Convention was to be held in Philadelphia, campaign sources said that Dick Cheney, the man charged with leading the selection process for the nominee, had recommended Danforth to Bush for the position.[7] However, despite growing speculation that Danforth was Bush's final pick, Bush selected Cheney himself for the position. Bush wrote in his autobiography Decision Points that Danforth would have been his choice if Cheney did not accept.

In September 2001, President Bush appointed Danforth a special envoy to Sudan. He brokered a peace deal that officially ended the civil war in the South between Sudan's Islamic government and Christian-backed Sudanese rebels, but elements of that conflict still remain unresolved (as has the separate Darfur conflict). The Second Sudanese Civil War ended in January 2005, with the signing of a peace agreement. Due to the Islamic-dominated North's military superiority, most of southern Sudan was decimated and the Christian rebels, and thus Danforth, achieved little for their efforts.

On June 11, 2004, Danforth presided over the funeral of Ronald Reagan, held at Washington National Cathedral.

On March 30, 2005, Danforth wrote an op-ed piece in the New York Times critical of the Republican party. The article began: "By a series of recent initiatives, Republicans have transformed our party into the political arm of conservative Christians...".[8] The article by an ordained Episcopal priest (followed by a June 17, 2005 piece headlined "Onward, Moderate Christian Soldiers"[9]) ignited considerable debate.[why?] The Washington Post on February 2, 2006, headlined its article "'St. Jack' and the Bullies in the Pulpit".[10]

On May 9, 2012, Danforth became part of a group, led by son-in-law and Summitt Distributing CEO Tom Stillman, that took over ownership of the St. Louis Blues in the National Hockey League.