John Clifford Pemberton (August 10, 1814 – July 13, 1881), was a career United States Army officer who fought in the Seminole Wars and with distinction during the Mexican–American War. He also served as a Confederate general during the American Civil War, noted for his defeat and surrender in the critical Siege of Vicksburg in the summer of 1863.

Pemberton was born in Philadelphia, Pennsylvania as the second child of John Pemberton (1783–1847) and Rebecca Clifford (1792–1869). He entered the United States Military Academy at West Point in 1833, and graduated four years later, standing 27th out of 50 cadets.[1] He was commissioned a second lieutenant in the 4th U.S. Artillery Regiment on July 1, 1837. He participated with the 4th during the U.S. actions against the Seminole Indians, tribe of native Americans in 1837 and 1838, fighting in Florida at the Battle of Locha-Hatchee on January 24, 1838.[2]

Pemberton and the 4th Artillery served in garrison duty at Fort Columbus, New York, in 1838 and into 1839, and then at the Camp of Instruction located near Trenton, New Jersey, in 1839. He then served along the northern U.S. frontier during the Canada Border Disturbances. Pemberton and the 4th were next stationed in Michigan, serving at Detroit in 1840, at Fort Mackinac in 1840 and 1841, and at Fort Bradyin in 1841. He then served in Buffalo, New York, in 1841 to 1842, and was promoted to first lieutenant on March 19, 1842. Pemberton and the 4th returned to garrison duty at Fort Monroe, Virginia in 1842, then were stationed at the U.S. Army Cavalry School at Carlisle Barracks, Pennsylvania, in 1842 and 1843, and returned to Fort Monroe from 1844 to 1845.[2]

From 1845 to 1846, Pemberton and the 4th Artillery were part of the U.S. Military Occupation of Texas, and then the 4th was sent to Mexico at the start of the Mexican–American War. He fought at the Battle of Palo Alto on May 8, 1846, and at the Battle of Resaca de la Palma the next day. He then fought well at the Battle of Monterrey in that fall, and was appointed a brevet captain "for Gallant Conduct in the several Conflicts at [Monterrey]" on September 23.[2]

Pemberton then fought in the Army's 1847 actions in Mexico, including the Siege of Vera Cruz in March, the Battle of Cerro Gordo in April, the skirmish near Amazoque in May, the capture of San Antonio and the Battle of Churubusco in August, and most notably in the Battle of Molino del Rey that September. Pemberton was appointed a brevet major[3] for his performance at Molino del Rey on September 8. He then was part of the storming of Chapultepec Castle on September 13, and the Battle for Mexico City that day and the next,[2] where Pemberton was wounded.[1] Pemberton held the position of aide-de-camp to Brev. Brig. Gen. William J. Worth from August 4, 1846, to May 1, 1849.[2]

Pemberton was a fellow staff lieutenant in the same division as his future opponent in the Civil War, Ulysses S. Grant.

After the war with Mexico, Pemberton and the 4th Artillery served in garrison duty at Fort Pickens near Pensacola, Florida, in 1849. He then fought in Florida during hostilities against the Seminoles in 1849 and 1850. The 4th returned to garrison duty at New Orleans Barracks in Louisiana in 1850, and Pemberton was promoted to captain on September 16. He next served in Fort Washington, Maryland, in 1851 and 1852, at Fort Hamilton, New York, in 1852 to 1856. He and the 4th fought again in Florida during hostilities against the Seminoles from 1856 to 1857.[2]

Pemberton and the 4th was then on frontier duty at Fort Leavenworth, Kansas, from 1857 to 1858, and participated in the Utah War in 1858. He was the stationed at Fort Kearny in the New Mexico Territory in 1859, at Fort Ridgely in present-day Minnesota from 1859 to 1861, and in garrison duty at the Washington Arsenal in Washington, D.C., in 1861.[2]

At the start of the American Civil War in 1861, Pemberton chose to resign his commission in the Union and join the Confederate cause, despite his Northern birth and the fact that his two younger brothers both fought for the Union. He resigned his commission, effective April 29.[1] His decision was due to the influence of his Virginia-born wife and many years of service in the southern states before the war.[5] He was appointed a lieutenant colonel in the Army of the Confederate States of America (ACSA), the regular Confederate Army on March 28, and was made assistant adjutant general of the forces around and in the Southern capital of Richmond, Virginia, on April 29, the date of his resignation from the U.S. Army. He was promoted to colonel on May 8. On May 9, Pemberton took a commission as a lieutenant colonel in the Artillery of the Provisional Army of Virginia.[6] Upon the absorption of the Virginia Provisional Army into the Confederate volunteer army, the Provisional Army of the Confederate States (PACS), Pemberton was appointed a major of artillery, a line field commission, on June 15, 1861 and was quickly promoted to brigadier general two days later. His first brigade command was in the Department of Norfolk, leading its 10th Brigade from June to November.[1]

Pemberton was promoted to major general on January 14, 1862, and given command the Confederate Department of South Carolina and Georgia, an assignment lasting from March 14 to August 29,[1] with his headquarters in Charleston. As a result of Pemberton's abrasive personality, his public statement that if he had to make the choice he would abandon the area rather than risk the loss of his outnumbered army,[7] and the distrust of his Northern birth, the governors of both states in his Department petitioned Confederate President Jefferson Davis for his removal. Davis needed a commander for a new department in Mississippi and also a command for Gen. P.G.T. Beauregard, so he sent Pemberton west and assigned the more popular Beauregard to Charleston.[8] 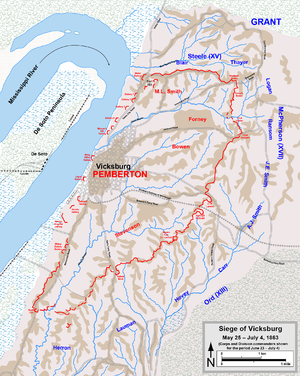 On October 10, 1862, Pemberton was promoted to the rank of lieutenant general,[1] and assigned to defend the fortress city of Vicksburg, Mississippi, and the Mississippi River, known as the Department of Mississippi and East Louisiana. Davis gave him the following instructions regarding his new assignment: "... consider the successful defense of those States as the first and chief object of your command." Pemberton arrived at his new headquarters in Jackson, Mississippi, on October 14.[9]

His forces consisted of fewer than 50,000 men under the command of Maj. Gens. Earl Van Dorn and Sterling Price, with around 24,000 in the permanent garrisons at Vicksburg and Port Hudson, Louisiana.[8] John D. Winters described the men under Pemberton as "a beaten and demoralized army, fresh from the defeat at Corinth, Mississippi."[9] Pemberton faced his former Mexican War colleague, the aggressive Union commander Maj. Gen. Ulysses S. Grant and over 70,000 Union soldiers in the Vicksburg Campaign.

In an attempt to carry out his orders from both Davis and Gen. Joseph E. Johnston, Pemberton and his Army of Mississippi set out east to combine with Johnston's forces gathering around Jackson, while remaining in contact and covering Vicksburg. Another order from Johnston changing their proposed meeting location caused Pemberton to turn around, and when he did he accidentally collided with Grant's army at the Battle of Champion Hill on May 16 and suffered a major defeat. Pemberton retreated to the Big Black River, where he fought and suffered even more heavy losses on May 17. Pemberton resolved to defend Vicksburg and led his defeated men back into its defenses on May 18. Although advised by Johnston to escape with his army, sacrificing the city, Pemberton held firm for over six weeks, while soldiers and civilians were starved into submission. (Pemberton, well aware of his reputation as a Northerner by birth, was probably influenced by his fear of public condemnation as a traitor if he abandoned Vicksburg.)

On the evening of July 2, 1863, Pemberton asked in writing his four division commanders if they believed their men could "make the marches and undergo the fatigues necessary to accomplish a successful evacuation" after 45 days of siege. With four votes of no, the next day Pemberton asked the Federals for an armistice to allow time for the discussion of terms of surrender, and at 10:00 a.m. on July 4 he surrendered the city and his army to Grant. The written terms (which in the first talks were simply unconditional surrender) were negotiated so that the Confederate soldiers would be paroled and:[10]

...be allowed to march out of our lines, the officers taking with them their side-arms and clothing, and the field, staff, and cavalry officers one horse each. The rank and file will be allowed all their clothing, but no other property.[10]

Pemberton surrendered 2,166 officers and 27,230 men, 172 cannon, and almost 60,000 muskets and rifles to Grant.[10] This, combined with the successful Siege of Port Hudson on July 9, gave the Union complete control over the Mississippi River, resulting in a major strategic loss for the Confederacy, and cutting off Lt. Gen. Edmund Kirby Smith's command and the Trans-Mississippi Theater from the Confederacy for the rest of the war.

After his surrender, Pemberton was exchanged as a prisoner on October 13, 1863, and he returned to Richmond. There he spent some eight months without an assignment. At first Gen. Braxton Bragg thought he could use Pemberton, but after conferring with his own ranking officers he advised Davis that taking on the discredited lieutenant general "would not be advisable." Pemberton finally wrote Davis directly, asking he be returned to duty "in any capacity in which you think I may be useful." Davis replied that his own personal confidence in him remained unshaken, saying:[11]

I thought and still think that you did right to risk an army for the purpose of keeping command of even a section of the Mississippi River. Had you succeeded none would have blamed; had you not made the attempt, few if any would have defended your course.[11]

Pemberton resigned as a general officer on May 9, 1864, and Davis offered him a commission as a lieutenant colonel of artillery three days later,[1] which he accepted, a testimonial of his loyalty to the South and the Confederate cause.[12] He commanded the artillery of the defenses of Richmond until January 9, 1865. He was appointed inspector general of the artillery as of January 7,[1] and held this position until he was captured in Salisbury, North Carolina, on April 12. Along with Pemberton and his 14 remaining guns, the Federals rounded up about 1,300 men and nearly 10,000 small arms.[13] There is no record of his parole after his capture.[1]

After the war, Pemberton lived on his farm near Warrenton, Virginia, from 1866 to 1876, and then returned to Pennsylvania. He died in Lower Gwynedd Township, Montgomery County, Pennsylvania, five years later. He was interred in the Laurel Hill Cemetery in Philadelphia. Protests against his being buried at Laurel Hill were made by the families of several famous people, such as General George Meade and Admiral John A. Dahlgren (whose brother also served as a Confederate General). It was decided that Pemberton would be interred elsewhere; however, he ended up in an obscure area of the cemetery. Recently, a ground level plate was surreptitiously added noting he was a "Confederate General Staff Officer". A statue depicting Pemberton was erected in the Vicksburg National Military Park. His nephew John Pemberton was also a Confederate soldier, and was later credited with inventing Coca-Cola.[14]