John Elliott Rankin (March 29, 1882 – November 26, 1960) was a Democratic congressman who served for sixteen terms from the U.S. State of Mississippi, from 1920 to 1952. He was co-author of the bill for the Tennessee Valley Authority and supported the New Deal programs of President Franklin D. Roosevelt, which brought investment and jobs to the South. He was described as a "racial demagogue", supporting racial segregation and white supremacy.[1]

Rankin proposed a bill to prohibit interracial marriage and opposed a bill to prohibit state use of the poll tax, which southern states had used since the turn of the century to disenfranchise most blacks and many poor whites. He used his power to support segregation and deny federal benefits of varied programs to negroes. For instance, in 1944, following the Port Chicago disaster, the U.S. Navy asked Congress to authorize payments of $5,000 to each of the victim's families. But, when Rankin learned most of the dead were black sailors, he insisted the amount be reduced to $2,000; Congress settled the amount at $3,000 per family.[2] He had larger negative effects through other political positions.

To agree to support the GI Bill, Rankin insisted that its administration be decentralized, which led to continued discrimination against black veterans in the South and their virtual exclusion from one of the most important postwar programs to build social capital among United States residents. In the South, black veterans were excluded from loans, training and employment assistance.[3] The historically black colleges were underfunded and could accept only about half the men who wanted to enroll.[3]

On the floor of the United States House of Representatives, Rankin expressed racist views of negroes,[4] Japanese Americans,[5] and Jews,[6] accusing Albert Einstein of being a communist agitator.[7] During World War II, Rankin had supported a bill to incarcerate all Japanese Americans in the US and its territories in camps; almost all ethnic Japanese on the West Coast were incarcerated in inland camps. In the late 20th century Congress authorized payment of reparations to survivors and their descendants.

Rankin was born near Bolanda in Itawamba County, Mississippi to a family that had planter ancestors with large holdings before the Civil War. His parents were Thomas Braxton Rankin, a schoolteacher and resident of Tupelo, and Venola Modeste (née Rutledge), born in Arkansas as the daughter of Robert Rutledge and Ellen (nee Conoway) Rutledge. His paternal ancestors had come to Mississippi from South Carolina in 1840. After attending local schools and a normal school, Rankin went to college, graduating from the University of Mississippi law school in 1910. He set up a practice in Clay County near where he grew up.

Rankin served in the United States Army during World War I.[9] 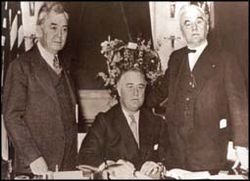 In 1920, Rankin was elected to the House as a Democrat. Since passage of a new constitution in 1890 that effectively disenfranchised negroes, Mississippi had become a one-party state dominated by Democrats. Rankin served sixteen consecutive terms (March 4, 1921 – January 3, 1953) as Mississippi's First District Representative. Appointed to the Census Committee as a freshman congressman, Rankin played an important role in opposing a reapportionment bill that would have reduced the representation of Mississippi, as well as one to reduce the overall representation of the South. Both bills were based on the fact that Southern states had disenfranchised most of their black voters but kept apportionment based on total population in each state, resulting in outsize representation for their white populations. The powerful Democrats consistently defeated northern representatives' effort to reduce southern apportionment.[10]

Rankin coauthored the bill to create the Tennessee Valley Authority, bringing major investment into the rural South. He was a supporter of the Rural Electrification Administration under President Franklin D. Roosevelt's administration, which also benefited many Southerners. He strongly supported Roosevelt's New Deal and advocated economic intervention in poor rural communities, but expected that most benefits would flow to southern whites. He supported racial segregation and opposed civil rights legislation.[11]

He was a sponsor of Edith Nourse Rogers' Servicemen's Readjustment Act of 1944 (also known as the G.I. Bill of Rights), but he insisted on a provision that the federal program would be administered in a decentralized manner by the states. This ensured that southern states could continue to practice discrimination against black veterans. According to historian Gavin Wright, "In a comprehensive econometric analysis, Sarah Turner and John Bound find that although the GI Bill had substantial positive benefits for black and white veterans outside the South, "those from the South made no significant gains in educational attainment."[3]

Rankin opposed the creation of the UN, stating, "The United Nations is the greatest fraud in all History. Its purpose is to destroy the United States."[11]

Rankin helped establish the House Un-American Activities Committee (HUAC) as a standing committee in Congress in February 1945 by leading a coalition of Republicans and Southern Democrats.[14] In the postwar years, he was active in probing the Communist Party, USA, and the German American Bund.

He was criticized for failing to investigate violence and murder perpetrated by chapters of the Ku Klux Klan. After HUAC's chief counsel Ernest Adamson announced: "The committee has decided that it lacks sufficient data on which to base a probe," Rankin added: "After all, the KKK is an old American institution."[15]

Rankin introduced a bill in 1920 to prohibit interracial marriage. During that decade, he opposed bills to make lynching a federal crime; although such a bill overwhelmingly passed the House, it was not approved by the Senate. In these positions, he was similar to other southern Democrats: he opposed other bills to support black civil rights, such as any efforts toward desegregation and the elimination of poll taxes for federal elections. Poll taxes had been used by southern states to disfranchise most blacks and many poor whites since the turn of the century. He argued that equal opportunity hiring practices (as required by the Roosevelt administration for defense contractors) "persecuted" whites, anti-lynching bills encouraged rape, and racial equality would destroy "the white man's civilization throughout the world."[16]

During World War II, Rankin alleged that the U.S. Army's loss of a certain battle was due to the cowardice of black soldiers. Fellow Representative Helen Gahagan Douglas replied that many black soldiers had been decorated for bravery despite serving in a segregated Army.[17] When black American Adam Clayton Powell Jr. was elected to Congress from New York in 1945, Rankin vowed to avoid sitting next to him.

Rankin was known to use the slur nigger on the floor of the United States House of Representatives.

In 1945, Representative Adam Clayton Powell Jr. (D-New York ) called for his impeachment. Although freshmen Congressmen were expected not to speak during their first year in office, Powell rose after one of Rankin's outbursts to say that "the time has arrived to impeach Rankin, or at least expel him from the party."[4]

During a debate about the 1949 Peekskill Riots in Cortlandt Manor, Westchester County, New York, Rankin again used the word nigger while addressing the House. Violence had erupted after a racist mob of white anti-communists attacked negroes leaving a concert where the black entertainer and political radical Paul Robeson had been performing. Rankin condemned Robeson for inciting the trouble because of his Civil Rights activism.[18]

The next person to speak was Representative Jacob Javits (R-New York) who instead condemned the white mob in Peekskill for violating constitutional guarantees of freedom of speech and free assembly.[19] Angered by these comments, Rankin bellowed, "It was not surprising to hear the gentlemen from New York defend the Communist enclave." He then wanted it known that the American people are not in sympathy "with that nigger Communist and that bunch of Reds who went up there."[19]

On a point of order, Representative Vito Marcantonio (R-New York) protested to House Speaker Sam Rayburn (D-Texas) that "the gentlemen from Mississippi used the word 'nigger.' I ask that the word be taken down and stricken from the RECORD inasmuch as there are two members in this house of Negro race." Rayburn claimed that Rankin had not said "nigger" but "Negro" but Rankin yelled over him saying "I said Niggra! Just as I have said since I have been able to talk and shall continue to say."[20] Speaker Rayburn defended Rankin, ruling that "the gentlemen from Mississippi is not subject to a point of order... referred to the Negro race and they should not be afraid of that designation."[20]

Rankin claimed that the Immigration and Nationality Act was opposed solely by American Jews:

They whine about discrimination. Do you know who is being discriminated against? The white Christian people of America, the ones who created this nation ... I am talking about the white Christian people of the North as well as the South ... Communism is racial. A racial minority seized control in Russia and in all her satellite countries, such as Poland, Czechoslovakia, and many other countries I could name. They have been run out of practically every country in Europe in the years gone by, and if they keep stirring race trouble in this country and trying to force their communistic program on the Christian people of America, there is no telling what will happen to them here.[23]

In late 1945, Albert Einstein backed calls for the United States to break off diplomatic relations with Spain's leader Francisco Franco, because the Spanish dictator had been an ally of Adolf Hitler. Rankin condemned Einstein on the floor of Congress, calling him a "foreign-born agitator" who sought "to further the spread of Communism throughout the world."[7]

An article in an ADL Bulletin, entitled "The Plot Against Anna M. Rosenberg", attributed the attacks on Rosenberg's loyalty to "professional anti-Semites and lunatic nationalists," including the "Jew-baiting cabal of John Rankin, Benjamin H. Freedman and Gerald Smith."[24]

During the 1951 espionage trial of Julius and Ethel Rosenberg, the Communist spies charged and convicted of passing information about the atomic bomb to the Soviet Union, Rankin was condemned by Jewish groups for repeatedly calling the Rosenbergs a pair of "communist kikes".[25]

In his first term as representative, Rankin introduced an anti-miscegenation bill to prevent whites from marrying "Mongolians" and negroes. A decade later, in 1930 he lobbied against Hawaii's bid for statehood on the grounds that it would add "two Jap senators" to Congress.[16] Following the Japanese surprise attack on Pearl Harbor that pulled the U.S. into World War II in December 1941, Rankin expressed his abhorrence of Japanese Americans. On February 19, 1942, Rankin addressed the House on the issue of Japanese American internment, as recorded in the Congressional Record:

I'm for catching every Japanese in America, Alaska, and Hawaii now and putting them in concentration camps. ... Damn them! Let's get rid of them now![5]

Rankin was one of the few Southern congressmen to support West Coast politicians and lobbyists calling for the mass incarceration of Japanese Americans, proposing that every person of Japanese ancestry in the United States be deported at the end of the war. He reintroduced a defeated "concentration camp bill" to remove ethnic Japanese from the country and all U.S. territories. (Most ethnic Japanese Americans were removed from the West Coast.) As the war progressed, he continued to speak out against Japanese Americans, testifying in favor of labeling Japanese and black American blood donations to prevent them from "contaminating" white recipients and limiting the segregated 442nd Regimental Combat Team to labor battalions instead of active combat.[16]

In 1947 Rankin ran for the Democratic nomination for the Mississippi seat in the Senate that was vacated by the death of Theodore G. Bilbo in office. He finished last among five major candidates, with 24,000 votes, a proportion of 13% .

In 1952 Rankin was defeated for re-election to the House by Congressman Thomas G. Abernethy, also a Democrat, after their districts were joined through redistricting. At that time, most blacks in Mississippi were still disenfranchised, a status that would persist until after Congressional passage of the Voting Rights Act of 1965.

Rankin died at his home in Tupelo on November 26, 1960. He is interred in Greenwood Cemetery in West Point, Mississippi.