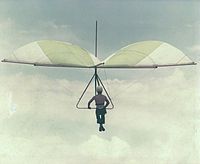 John Wallace Dickenson (born 22 January 1934) is an Australian inventor, who developed some liquid flow measuring devices[1] and designed a successful hang glider configuration.[2] He is recipient of the Gold Air Medal,[3] the highest award given by the Fédération Aéronautique Internationale, the world governing body for air sports, aeronautics and astronautics world records. 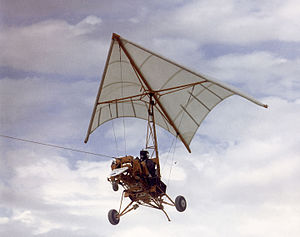 In 1963, after seeing an image of a Rogallo wing airfoil, specifically "Ryan research aircraft" on a magazine, Dickenson set to build a water skiing kite[4] that could be released at altitude for a glide to a safe drop in the water, thus designed and built a water skiing kite wing he called the Ski Kite.[5][6][7]

His ski kite format incorporated an airframe with a triangle control frame as used in hang gliding in Breslau 1908, having a basebar tow-point and was integrated on an all-ready publicized four-boom stiffened Rogallo wing airfoil, where the pilot sat on a swinging seat while the control frame and wire bracing distributed the load to the wing as well as giving a frame to brace for weight-shift control.[8][9] Dickenson's Ski Wing turned out to be stable and controllable, unlike the flat manned kites used at water ski shows.[10] The Ski Wing was first flown in public at the 'Grafton Jacaranda Festival', New South Wales, Australia, in September 1963 by Rod Fuller while towed behind a motorboat.

The Ski Kite was light and portable like the prior instances of the same wing earlier by others such as James Hobson, Charles Richards, Thomas H. Purcell of which he had not studied, so Dickenson decided to file for a mechanical patent, but lacking on economic resources, the patent process of formal review of claims could not be entered to determine which, if any, of the claims could hold, so the patent was not awarded.[11] Since the single hang point and triangle control frame had already been in public domain, those two claims globally would not have stood the test of professional scutiny; the full mechanics were freely already available in John Worth.[12] A full year prior the four-boom stiffened Rogallo-wing hang glider by James Hobson had been publicly shown in Sport Aviation magazine of the Experimental Aircraft Association and also displayed for viewer in the USA national television program Lawrence Welk Show.

Mark I with A-frame

Produced on November 1964.
Changes: sewn sail.
Diagrams of this sent to Francis Rogallo at NASA.
On 1965, John leaves Grafton for Sydney. 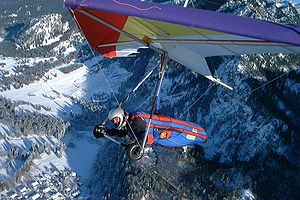 A basic hang glider flying over the Alps (2006)

Dickenson's hang glider format was further developed by other builders and directly helped to build the popularity of hang gliding around the world in the 1970s and 1980s.[15][16][17][18][19]

It is certain that many people from many countries, made contributions to the development of the flexible wing hang glider to the extent that any global mechanical claim for invention would be untenable. In the aviation context of 'first flights' and recreational vs. commercial developments, new and old inventions often complement in synergy; it is in this evolutionary and social context that the crucial developments put together by Otto Lilienthal, Gustave Whitehead, Francis Rogallo, John Worth, Barry Hill Palmer, Charles Richards, Cecil E. Craigo, Peter F. Girard, Thomas H. Purcell Jr., and many other before John Dickenson, were the ones that were most successful and influential on the evolution of stiffened four-boom hang gliders.[5][20] John Dickenson was a ski-kite leader; he never foot-launched a hang glider but was a leader in the delta waterski sport.

Most recognitions and awards have been given to Dickenson decades after his invention:[21]