From Infogalactic: the planetary knowledge core
Jump to: navigation, search
For the lawyer and activist, see Joseph H. Choate, Jr.. 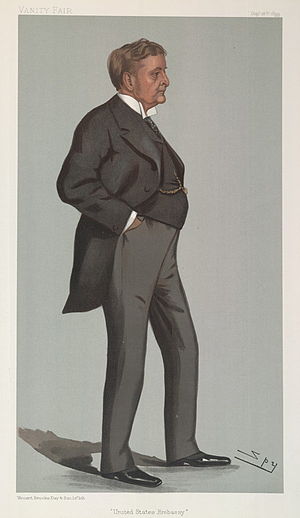 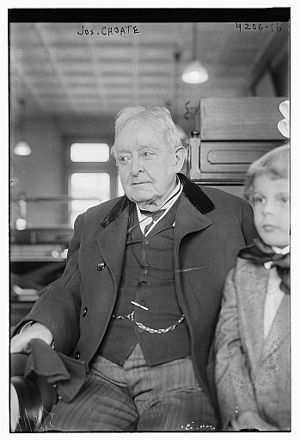 Joseph Hodges Choate (January 24, 1832 – May 14, 1917) was an American lawyer and diplomat. Choate was associated with many of the most famous litigations in American legal history, including the Kansas prohibition cases, the Chinese exclusion cases, the Maynard election returns case, the Income Tax Suit, and the Tilden, Stanford, and AT Stewart will cases. In the public sphere, he was influential in the founding of the Metropolitan Museum of Art.[1]

Choate was born in Salem, Massachusetts, on January 24, 1832. He was the son of physician George Choate and the brother of George Cheyne Shattuck Choate. His father's first cousin was Rufus Choate. After graduating from Harvard College in 1852 and Harvard Law School in 1854, he was admitted first to the Massachusetts (1855) and then (1856) to the New York bar, and entered the law office of Scudder & Carter in New York City.

His success in his profession was immediate, and in 1860 he became junior partner in the firm of Evarts, Southmayd & Choate, the senior partner in which was William M. Evarts. This firm and its successor, that of Evarts, Choate & Beaman, remained for many years among the leading law firms of New York and of the country, the activities of both being national rather than local.

During these busy years, Choate was associated with many of the most famous litigations in American legal history, including the Tilden, AT Stewart, and Stanford will cases, the Kansas prohibition cases, the Chinese exclusion cases, the Maynard election returns case, and the Income Tax Suit. In 1871 be became a member of the Committee of Seventy in New York City, which was instrumental in breaking up the Tweed Ring, and later assisted in the prosecution of the indicted officials. He served at president of the American Bar Association, the New York State Bar Association, and the New York City Bar Association. In the retrial of the General Fitz-John Porter case he obtained a reversal of the decision of the original court-martial.

His greatest reputation was won perhaps in cross-examination. In politics he allied himself with the Republican Party on its organization, being a frequent speaker in presidential campaigns, beginning with that of 1856. He never held political office, although he was a candidate for the Republican U.S. senatorial nomination for New York against Senator Thomas C. Platt in 1897. In 1894 he was president of the New York state constitutional convention.

He was appointed, by President McKinley, U.S. Ambassador to the United Kingdom to succeed John Hay in 1899, and remained in this position until the spring of 1905. In England he won great personal popularity, and accomplished much in fostering the good relations of the two great English-speaking powers. He was one of the representatives of the United States at the second Peace Congress at the Hague in 1907.

Upon the outbreak of the World War I, he ardently supported the cause of the Allies. He severely criticized President Wilson's hesitation to recommend America's immediate cooperation, but shortly before his death retracted his criticism. He was chairman of the mayor's committee in New York for entertaining the British and French commissions in 1917. His death was hastened by the physical strain of his constant activities in this connection.

He died on May 14, 1917, in Manhattan.[3] Joseph Hodges Choate is interred in the family mausoleum at Woodlawn Cemetery in The Bronx, New York City.

In 1919, two years after his death, members of the Harvard Club of New York City established the Joseph Hodges Choate Memorial Fellowship at Harvard University to commemorate his life and legacy. It is awarded each year to a student from the University of Cambridge on the recommendation of the Cambridge Vice-Chancellor for study in any Department of Harvard University. The Fellow resides in the Choate Suite in John Winthrop House and his or her name is recorded on a board in the House Dining Hall.

Several of Choate's notable public addresses have been published. The Choate Story Book (1903) contains a few of his addresses and after-dinner speeches, and is prefaced by a brief biographical sketch. His country house, Naumkeag, was designed by Stanford White and is open to the public as a nonprofit museum in Stockbridge, Massachusetts.

His great-great-grandson is actor Oliver Platt.