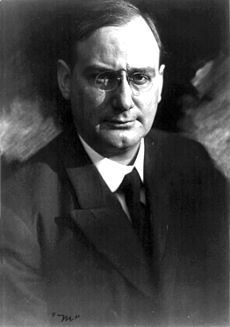 Joseph Folk was born in Brownsville, Tennessee to Henry Bate and Martha Estes Folk and raised in a strict Baptist household. His early education was completed at Brownsville Academy, after which he worked for several companies in Memphis, Tennessee as a clerk and bookkeeper. Folk studied law and graduated from Vanderbilt University in 1890. He joined his father's law firm and focused on criminal law.[1]

Early in his career, Folk ran for a seat in the Tennessee House of Representatives in 1892, wrote newspaper articles, spoke on special occasions, and joined the Knights of Pythias. In 1893, he moved to St. Louis to join his uncle's law practice. Folk married Gertrude Glass on November 10, 1896. He helped to organize the Jefferson Club, a local young Democrats' organization, and acted as the group's president in 1898-1899.[1]

Folk made his reputation as a lawyer for transit workers in the St. Louis Streetcar Strike of 1900. His work as mediator earned him a Democratic nomination for circuit attorney in 1900, and he won the election against Judge Eugene Mcquillen.

Folk earned his nickname by attacking local corruption and party machines. With the assistance of Lincoln Steffens's articles published in McClure's magazine, Folk led investigations of the city's Democratic boss, Col. Ed Butler[2] and the corrupt "boodle ring" of corporate bribery in the state and municipal government.[3] Although some of the convictions Folk obtained were overturned on appeal, his work had national and international consequences. Folk gained the respect of Republican President Theodore Roosevelt as he and other crusading prosecutors and muckraking journalists brought national attention to municipal corruption. Folk's prosecution of the Suburban Railway Company stimulated a change in US treaties with Mexico to include bribery as grounds for extradition. As district attorney, Folk encountered opposition from many businessmen and politicians, who believed that his exposing corrupt practices hurt the city's reputation, and thus the Democratic party as well as the business climate.[1]

Folk was elected the 31st Governor of Missouri as a progressive reformer and Democrat in the 1904 election. In the governor's office, he advocated the "Missouri Idea", the concept of Missouri as a leader in public morality through popular control of law and strict enforcement. His administration found initial success despite opposition and successfully conducted antitrust prosecutions, ended gratis railroad passes for state officials, extended bribery statues, improved election laws, required formal registration for lobbyists, made racetrack gambling illegal, and enforced the Sunday-closing law. The latter half of Folk's gubernatorial term found a Democratically controlled General Assembly, in large part due to Folk's reforms. The governor was able to enact further legislation, including an initiative and referendum amendment to the Constitution of Missouri, and further regulation of elections, education, employment and child labor, railroads, food, business, and public utilities. A number of examiner boards and commissions were established during Folk's administration, including many agricultural boards and the Missouri library commission.[1]

Following his gubernatorial term, Folk's focus on morality and unwillingness to compromise eventually made him politically unpopular, and his initial attempts for a senate nomination were unsuccessful. He returned to law practice, toured as a Chautauqua speaker, and campaigned for Woodrow Wilson. Wilson appointed Folk as a solicitor for the US State Department, where he investigated major railroad companies. In 1918, he was able to win a Democratic nomination for the US Senate, but lost in the election. After a brief stint at the St. Louis Chamber of Commerce, Folk opened a private law office in Washington, D.C. He arbitrated in several international negotiations.[1]

Folk experienced a nervous breakdown in March 1922, believed to be from overwork.[1] He died aged 54 in 1923 in New York City, and is buried at the Oakwood Cemetery in Brownsville, Tennessee.

His Washington D.C. residence is now the Embassy of Mauritania. A 1943 Liberty ship was named in his honor.