Joyce Diane Brothers (née Bauer; October 20, 1927 – May 13, 2013) was an American psychologist, television personality and columnist, who wrote a daily newspaper advice column from 1960 to 2013. In 1955, she became the only woman ever to win the top prize on the American game show The $64,000 Question, answering questions on the topic of boxing, which was suggested as a stunt by the show's producers. In 1958, she presented a television show on which she dispensed psychological advice, pioneering the field.[1][2] She wrote a column for Good Housekeeping for almost forty years and became, according to The Washington Post, the "face of American psychology".[1] Brothers appeared in dozens of television roles, usually as herself, but from the 1970s onward she accepted roles portraying fictional characters, often self-parodies.

Joyce Diane Bauer was born in 1927[A] in Brooklyn, New York, to Estelle (née Rapaport)[4] and Morris K. Bauer, attorneys who shared a law practice.[5] Her family was Jewish.[6] She graduated from Far Rockaway High School in January 1944. She entered Cornell University, double majoring in home economics and psychology and was a member of Sigma Delta Tau sorority.[4][7] She earned her Ph.D degree in psychology from Columbia University.[8] The American Association of University Women AAUW awarded Brothers the American Fellowship in 1952, which enabled her to complete the doctoral degree.[9]

Brothers gained fame in late 1955 by winning The $64,000 Question game show, on which she appeared as an expert in the subject area of boxing. Originally, she had not planned to have boxing as her topic, but the sponsors suggested it, and she agreed. A voracious reader, she studied every reference book about boxing that she could find; she would later tell reporters that it was thanks to her good memory that she assimilated so much material and answered even the most difficult questions.[11] After seven weeks on the show she became the second person, and only woman, to win the $64,000 top prize. Two years later, Brothers appeared on a successor program, The $64,000 Challenge, which matched the contestant against experts in the field. Again, Brothers walked off with the maximum prize.

In 1959, allegations that quiz shows were rigged, due to the Charles Van Doren controversy on the quiz show Twenty One, began to surface and stirred controversy. Despite these claims, Brothers insisted she had not cheated, nor ever been given any answers to questions in advance. During a 1959 hearing in the quiz show scandal, a producer exonerated her of involvement.[2][12] Her success on The $64,000 Question earned Brothers a chance to be the color commentator for CBS during the boxing match between Carmen Basilio and Sugar Ray Robinson. She was said to have been the first woman boxing commentator.[13]

Richard N. Goodwin, the chief investigator of the quiz show scandals, wrote of how he questioned Brothers, and when she began to cry he decided not to pursue any further inquiries into her actions on the quiz show. 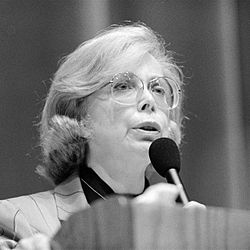 Dr. Brothers was the convocation speaker at her alma mater Cornell University in May 1988.[14]

By August 1958, Brothers was given her own television show on a New York station, but her topic was not sports; she began doing an advice show about relationships, during which she answered questions from the audience.[15] She claimed to have been the first television psychologist, explaining to The Washington Post: "I invented media psychology. I was the first. The founding mother."[16] Sponsors were nervous about whether a television psychologist could succeed, she recalled, but viewers expressed their gratitude for her show, telling her she was giving them information they could not get elsewhere.[16]

Brothers also had a monthly column in Good Housekeeping magazine for almost four decades,[2] and a syndicated newspaper column that she began writing in the 1970s and which at its height was printed in more than 300 newspapers.[1][17][18] She also published several books including the 1981 book, What Every Woman Should Know About Men,[19] and the 1991 book, Widowed, inspired by the loss of her husband.[8] Her advice was also used as a source for some questions on the 1998-2004 incarnation of Hollywood Squares.

As a psychologist, Brothers had been licensed in New York since 1958.[20]

Brothers died, aged 85, at her home in Fort Lee on May 13, 2013 due to respiratory failure.[1][8] She is survived by her daughter Lisa Brothers Arbisser, four grandchildren, three great-grandchildren, and a sister.[2][21] The Washington Times called her "the mother of television psychology".[22] She is credited with inspiring "Dr. Laura" Schlessinger and "Dr. Phil" McGraw who called himself "a very big fan of hers" after her death.[2]

^A Some sources indicate 1928 as her year of birth. An official document (though not a birth certificate) in her personal papers held at Cornell University indicates that her birth date was October 20, 1927.[citation needed]