John McLean (March 11, 1785 – April 4, 1861) was an American jurist and politician who served in the United States Congress, as U.S. Postmaster General, and as a justice on the Ohio and U.S. Supreme Courts. He was often discussed for the Whig and Republican nominations for President.[1]

McLean was born in Morris County, New Jersey, the son of Fergus McLean and Sophia Blackford. After living in a succession of frontier towns, Morgantown, Virginia; Nicholasville, Kentucky; and Maysville, Kentucky; in 1797 his family settled in Ridgeville, Warren County, Ohio. It was here that Mclean received his formal education in the classical style and that his interest in law began to develop. Going on to graduating from Harvard in 1806. It can also be argued that his anti-slavery views also began to form at this time, given his upbringing as an evangelical Methodist with a focus on egalitarianism. His brother William was also a successful Ohio politician. His brother Finis McLean was a United States Representative from Kentucky.

He read law and was admitted to the bar in 1807. That same year he founded The Western Star, a weekly newspaper at Lebanon, the Warren County seat. In 1810 Mclean transferred ownership of the Star to his brother Nathaniel and hung up his shingle, beginning to practice law as an individual lawyer for the first time. He was elected to the U.S. House for the Thirteenth and Fourteenth Congresses, serving from March 4, 1813, until he resigned in 1816 to take a seat on the Ohio Supreme Court, to which he had been elected on February 17, 1816, replacing William W. Irvin.

This case, which occurred during Mclean's tenure on the Ohio Supreme Court, foreshadowed McLean’s future dissent in an important fugitive slavery case, Dred Scott v. Sandford (1857). In it, a black man named Richard Lunsford, a Kentucky slave, applied for a writ of habeas corpus to obtain freedom from his owner, Thomas D. Carneal. The Ohio Constitution of 1802 forbade slavery in the state, and at issue was whether slaves owned by a man traveling in Ohio became free once they traveled to Ohio and whether a slave who resided in Kentucky could be sent to work in Ohio without gaining his freedom. Lunsford, as a slave who was regularly sent to work in Ohio, sued on the grounds that, by having him travel to work in Cincinnati for periods of over a week, Thomas Carneal forfeited his right as Lunsford’s master. The Court ruled, with Mclean issuing its opinion, that since Carneal sold Lunsford to a Mr. James Riddle, the man who sent Lunsford to Cincinnati, he did in fact forfeit his right to be Lunsford’s owner. The most notable portion of this case was Mclean’s opinion, which highlighted his personal distaste for the institution of slavery: “Were it proper to consider it, the Court, as well as from the principles recognized by our Constitution and Laws, could not hesitate in declaring that SLAVERY (emphasis in original), except for the punishment of crimes, is an infringement upon the sacred rights of man: Rights, which he derives from his Creator, and which are inalienable.” [2] 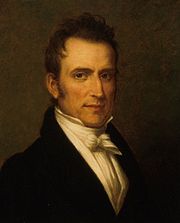 He resigned his judgeship in 1822 to take President James Monroe's appointment to be Commissioner of the General Land Office, serving until 1823, when Monroe appointed him United States Postmaster General. McLean served in that post from December 9, 1823, to March 7, 1829, under Monroe and John Quincy Adams, presiding over a massive expansion of the Post Office into the new western states and territories and the elevation of the Postmaster Generalship to a cabinet office.

While Postmaster General, McLean supported Andrew Jackson, who offered him the posts of Secretary of War and Secretary of the Navy. McLean declined both and was instead appointed to the Supreme Court by Jackson on March 6, 1829, to a seat vacated by Robert Trimble. McLean was confirmed by the United States Senate on March 7, 1829, receiving his commission the same day.

Known as "The Politician on the Supreme Court," he associated himself with every party on the political spectrum, moving from a Jackson Democrat, to the Anti-Jackson Democrats, the Anti-Masonic Party, the Whigs, the Free Soilers, and finally the Republicans. Through the 1830s and 1840s, he was frequently discussed as a potential Whig presidential candidate. President John Tyler offered him the post of Secretary of War, but he declined. Because of his anti-slavery-extension positions, he was considered by the new Republican party as a candidate in 1856. Despite his efforts, the nomination went to John C. Frémont. In 1860, he tried again, winning twelve votes on the first ballot at the Republican convention in Chicago; Abraham Lincoln ultimately was nominated.

McLean's tendency toward economic nationalism can be seen in cases such as Groves v. Slaughter, 40 U.S. 449 (1841). In this case, Mclean upheld the right of Mississippi to restrict the introduction of slaves from other states. Though it was “not necessary” to the decision, McLean restated his nationalism by holding that the power to regulate commerce rested exclusively with Congress. “The necessity of a uniform commercial regulation, more than any other consideration, led to the adoption of the federal Constitution… and unless the power be not only paramount, but exclusive, the Constitution must fail to attain one of the principle objects of its formation” McLean wrote.[3]

This sense of nationalism could be seen again in his concurrent opinion on the Passenger Cases (1849). The most senior member of the Court at the time, Mclean began his opinion by weighing in on the debate concerning the nature of the Commerce Clause. McLean asserted the Commerce Clause “is exclusively vested in Congress.” Under this view, if the federal government does not regulate a particular area of foreign or interstate commerce, it means that federal policy maintains that such an area should remain unregulated, not that states should have the right to impose individual regulations. To McLean, only one authority could exercise any given power, and the judicial task was to determine whether a particular subject fell within a power delegated to the federal government or within a power reserved to the States. McLean denied that the States could exercise a power unless the federal government chose to exercise the same power, at which point state regulation would be trumped by federal action. Although McLean recognized that both Congress and the States could impose a tax on the same object, he insisted these respective taxes result from the exercise of distinct powers, and did not represent any concurrent exercise of the same power.

In Groves v. Slaughter, which concerned a Mississippian man who had bought some slaves but believed that he could escape without paying the slave-trader due to a clause in the Missouri constitution that seemed to forbid the importation of slaves for in-state sale after a certain date. For the Court, the issue became whether Congress possessed an exclusive right to regulate interstate commerce. If so, did it follow that states could not constitutionally regulate the slave trade? Moreover, should the Court answer in the affirmative, on what basis could a state abolish slavery? Mclean, seeking to limit national regulation in regards to slavery, paradoxically abandoned his aforementioned position as an economic nationalist when he claimed, “The power over slavery belongs to the States respectively. It is local in its character and in its effects.”[4] This was of course done in accordance with the Free Soil fear that, if the states lost their power to regulate slavery, what was to stop its spread into the free North? Mclean held that the States should be given the right to protect themselves from the “avarice and intrusion of the slave dealer.”[4] All of this he contended while holding the aforementioned view, which demonstrates his tortured reconciliation of two neo-Federalist political biases, which in this case contradict: one favoring an expansive national government, the other condemning slavery.

In Prigg v. Pennsylvania Mclean dissented. By his reasoning, it was necessary for Prigg to take Morgan to court to demonstrate that she was, in fact, a slave. As such Prigg did not have the legal pretext to forcibly remove Morgan from the state of Pennsylvania, without first gaining judicial approval. Only once a court decided that Morgan was technically a slave would Prigg have the authority to transport her across state lines. McLean suggests that this process was the only way to be fair to the slave, the owner, the free state, and the slaveholding state from which the slave came, stating that “[his] opinion, therefore, does not rest so much upon the particular law of Pennsylvania, as upon the inherent and sovereign power of a state, to protect its jurisdiction and the peace of its citizens, in any and every mode which its discretion shall dictate, which shall not conflict with a defined power of the federal government.”[5]

In Dred Scott v. Sandford, he was one of two dissenting Justices to the majority vote, the other being Justice Benjamin R. Curtis. Justice McLean cited Marie Louise v. Marot, an 1835 freedom suit appealed to the Louisiana Supreme Court in which Presiding Judge George Mathews, Jr. stated that "[b]eing free for one moment...it was not in the power of [the plaintiff's] former owner to reduce her again to slavery."[6] McLean's strong dissenting views are believed to have forced the hand of Chief Justice Roger Brooke Taney into a harsher and more polarizing opinion than he originally planned. To the argument that "a colored citizen would not be an agreeable member of society", McLean responded, "This is more a matter of taste than of law." He also wrote the Court's opinion denying there was a common-law copyright in American law in Wheaton v. Peters.

During the 1820s, McLean was a member of the prestigious society, Columbian Institute for the Promotion of Arts and Sciences, who counted among their members former presidents Andrew Jackson and John Quincy Adams and many prominent men of the day, including well-known representatives of the military, government service, medical and other professions.[7]

McLean became the last surviving member of the Monroe and Adams Cabinets. He died in Cincinnati, Ohio, and was buried in Spring Grove Cemetery there.[8] Also interred there is Stanley Matthews, another Associate Justice.[9][10]

During the American Civil War, Camp John McLean, a Union Army training camp in Cincinnati, was named in his honor.

This article incorporates public domain material from websites or documents of the Biographical Directory of the United States Congress.