Katharine Meyer Graham (June 16, 1917 – July 17, 2001) was an American publisher. She led her family's newspaper, The Washington Post, for more than two decades, overseeing its most famous period, the Watergate coverage that eventually led to the resignation of President Richard Nixon. Her memoir, Personal History, won the Pulitzer Prize in 1998.

Katharine Graham was born Katharine Meyer in 1917 into a privileged family in New York City, the daughter of Agnes Elizabeth (née Ernst) and Eugene Meyer. Graham's father was a financier and, later, a public official. He bought The Washington Post in 1933 at a bankruptcy auction. Graham's mother was a bohemian intellectual, art lover, and political activist in the Republican Party, who shared friendships with people as diverse as Auguste Rodin, Marie Curie, Thomas Mann, Albert Einstein and Eleanor Roosevelt, and worked as a newspaper reporter at a time when journalism was an uncommon profession among women. Graham's father was Jewish and her mother was Lutheran, from a family of German descent.[1][2][3][4] Along with her four siblings, Graham was baptized as a Lutheran but attended an Episcopal church.[5] Her siblings included Florence Meyer, Eugene Meyer III (Bill), Ruth Meyer and Elizabeth Meyer.

Graham's parents owned several homes across the country, but primarily lived between a veritable "castle" in Mount Kisco, New York, and a smaller home in Washington, D.C. Graham often did not see much of her parents during her childhood, as both traveled and socialized extensively, and was raised in part by nannies, governesses and tutors. Katharine endured a strained relationship with her mother. Agnes Meyer was reportedly very negative and condescending towards Katharine, which had a negative impact on Katharine's self-confidence.

Her elder sister Florence Meyer (1911–1962) was a successful photographer and wife of actor Oscar Homolka.

Graham was an alumna of The Madeira School (to which her father had donated much land) and attended Vassar College before transferring to the University of Chicago. In Chicago, she became quite interested in labor issues and shared friendships with people from walks of life very different from her own. After graduation, she worked for a short period at a San Francisco newspaper where, among other things, she helped cover a major strike by wharf workers.

Her father's sister, Florence Meyer Blumenthal founded the Prix Blumenthal, given to painters, sculptors, decorators, engravers, writers, and musicians during the period of 1919-1954.[6]

Graham began working for the Post in 1938. While in Washington, D.C., she met a former schoolmate, Will Lang Jr. The two dated, but broke off the relationship due to conflicting interests.

Philip Graham became publisher of the Post in 1946, when Eugene Meyer handed over the newspaper to his son-in-law. Katharine recounts in her autobiography, Personal History, how she did not feel slighted by the fact her father gave the Post to Phillip rather than her: "Far from troubling me that my father thought of my husband and not me, it pleased me. In fact, it never crossed my mind that he might have viewed me as someone to take on an important job at the paper."[7] Meyer went on to become the head of the World Bank. Meyer left that position only six months later; he was Chairman of the Washington Post Company until his death in 1959, when Philip Graham took that position and the company expanded with the purchases of television stations and Newsweek magazine.

In her 1997 autobiography, Graham comments several times about how close her husband was to politicians of his day (he was instrumental, for example, in getting Johnson to be the Democratic vice presidential nominee in 1960), and how such personal closeness with politicians later became unacceptable in journalism. She tried to push white lawyer Edward Bennett Williams into the role of Washington D.C.'s first commissioner mayor in 1967. The position went to Howard University-educated lawyer Walter Washington.[8]

Graham was also known for a long-time friendship with Warren Buffett, whose Berkshire Hathaway owns a substantial stake in the Post.

Philip Graham dealt with alcoholism and mental illness throughout his marriage to Katharine. He had mood swings and often belittled her, calling her horrible names.[9] On Christmas Eve in 1962, Katharine found out her husband was having an affair with Robin Webb, an Australian stringer for Newsweek. Philip declared that he would divorce his wife for Robin and he made motions to divide up the couple's assets.[9]

At a newspaper conference in Phoenix, Arizona, Philip apparently had a nervous breakdown.[10] Graham was sedated and flown back to Washington, where he would end up in the Chestnut Lodge psychiatric facility near Washington, D.C.[10] During a weekend release from Chestnut Lodge on August 3, 1963, Philip Graham committed suicide with a 28-gauge shotgun at the couple's Glen Welby home. Katherine Graham never remarried.

Katharine Graham assumed the reins of the company and of the Post, after Philip Graham's suicide. Graham was de facto publisher of the newspaper from 1963 onward, held the title of president from at least 1967,[8] then formally holding the title of publisher from 1969 to 1979 and that of chairwoman of the board from 1973 to 1991. She became the first female Fortune 500 CEO in 1972, as CEO of the Washington Post company.[11][12] As the only woman to be in such a high position at a publishing company, she had no female role models and had difficulty being taken seriously by many of her male colleagues and employees. Graham outlined in her memoir her lack of confidence and distrust in her own knowledge. The convergence of the women's movement with Graham's ascension to power at the Post brought about changes in Graham's attitude and also led her to promote gender equality within her company.

Graham hired Benjamin Bradlee as editor and cultivated Warren Buffett for his financial advice; he became a major shareholder and something of an eminence grise in the company. Her son Donald was publisher from 1979 to 2000.

Graham presided over the Post at a crucial time in its history. The Post played an integral role in unveiling the Watergate conspiracy and ultimately led to the resignation of President Richard Nixon.

Graham and editor Bradlee first experienced challenges when they published the content of the Pentagon Papers. When Post reporters Bob Woodward and Carl Bernstein brought the Watergate story to Bradlee, Graham supported their investigative reporting and Bradlee ran stories about Watergate when few other news outlets were reporting on the matter.

In conjunction with the Watergate scandal, Graham was the subject of one of the best-known threats in American journalistic history. It occurred in 1972, when Nixon's attorney general, John Mitchell, warned reporter Carl Bernstein about a forthcoming article: "Katie Graham's gonna get her tit caught in a big fat wringer if that's published."[13] The two words her tit were cut on publication.

Other accomplishments and recognition 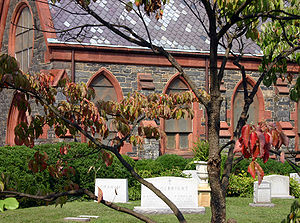 Graham had strong links to the Rockefeller family, serving both as a member of the Rockefeller University council and as a close friend of the Museum of Modern Art, where she was honored as a recipient of the David Rockefeller Award for enlightened generosity and advocacy of cultural and civic endeavors (see External links below).

In 1966, Graham was the ostensible honoree of Truman Capote's Black and White Ball.

In 1973, Graham received the Elijah Parish Lovejoy Award as well as an honorary Doctor of Laws degree from Colby College.

In 1975, Graham received the S. Roger Horchow Award for Greatest Public Service by a Private Citizen, an award given out annually by Jefferson Awards.[14]

In 1979, the Supersisters trading card set was produced and distributed; one of the cards featured Graham's name and picture.[15]

In 1988, Graham was elected a Fellow of the American Academy of Arts and Sciences.[16]

Graham published her memoirs, Personal History, in 1997. The book was praised for its honest portrayal of Philip Graham's mental illness and received rave reviews for her depiction of her life, as well as a glimpse into how the roles of women have changed over the course of Graham's life. The book won the Pulitzer Prize in 1998.

In 1997 she received the Freedom medal.

In 2000, Graham was named as one of the International Press Institute's 50 World Press Freedom Heroes of the past 50 years.[17]

In 2002, Katharine Graham was presented, posthumously, with the Presidential Medal of Freedom by President George W. Bush.

In 2001, Graham fell on a sidewalk while visiting Sun Valley, Idaho. Three days later she died in a hospital in Boise due to trauma resulting from the ensuing head injury.[18] Her funeral took place at the Washington National Cathedral. Graham is buried in historic Oak Hill Cemetery, across the street from her former home in Georgetown.[19][20]