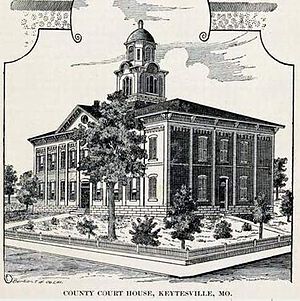 Chariton County's second courthouse. It replaced one destroyed by Confederate raiders during the Civil War.

The town is named for Englishman James Keyte, the town founder.[7] Keyte, a Methodist preacher, purchased a large parcel of land in 1830 and, two years later, donated fifty acres of it to Chariton County for the purpose of establishing a centralized seat of county government.[8] Prior to that time, the county business had been conducted from "Old Chariton," a small village near the confluence of the Chariton and Missouri Rivers. However, incessant disease-spreading mosquitoes and repeated river flooding necessitated a new location.[9]

The first courthouse was constructed in Keytesville between 1833 and 1834. As a two-story, four-room brick building, it survived until September 20, 1864, when it was burned down by the Confederate raiders during the American Civil War.[9] James Keyte constructed the first home in Keytesville, and the first business as well. Both were log structures, with the second doubling as a post office. Keyte is also responsible for the town's first industry of any sort, when he constructed a mill near his home on Muscle Fork Creek.[8] Isaac Redding added a Keytesville's first hotel in August 1842. Keytesville was incorporated on February 3, 1868, by the state of Missouri, and incorporated as a Missouri 4th class city in March 1883.[8]

One of Keytesville's native sons, Sterling Price, was a key figure in Missouri during the Civil War, and violence would be visited on the community as well. As mentioned above, on September 20, 1864, a Confederate force of 250 men—among them George Todd and other members of Quantrill's Raiders [10]—under Major John Thrailkill arrived at the edge of town. This was part of General Price's larger 1864 campaign through the Show Me state, as his forces advanced from eastern Missouri to the Kansas City area along the Missouri river. At the time, Thrailkill's force arrived Keytesville was defended by a small Union detachment of thirty-five men from the Missouri militia, commanded by Lieutenant Anthony Pleyer.[11] Early on the morning of September 20, under a flag of truce, Major Thrailkill demanded the surrender of the Union troops, promising fair treatment. Seeing the situation as hopeless, Pleyer complied. Rather than being taken prisoner, the Union garrison was paroled. Confederate forces then briefly occupied the town, liberating supplies from various merchants, setting the courthouse ablaze and killing two citizens—Chariton County sheriff Robert Carmon and William Young, a Union scout and alleged spy.[12]

A second courthouse was built not long after the Civil War concluded. In February 1866, a contract was awarded for construction of a two-story brick building with cupola. It was built at a cost of $40,000, and served the county until 1973.[13] By the mid-1890s, Keytesville had an estimated population of around 1,100 citizens. Two newspapers, the Chariton Courier and Keytesville Signal, served the community. Business and industry at that time consisted of Keytesville Roller Mill, a large water-powered grist mill on Muscle Fork Creek, two banks, a building and loan association, two hotels, a distillery, general mercantiles, restaurants, and sundry other businesses.[8][9] Due to its location 1.5 mi (2.4 km) north of the Wabash Railroad line, the merchants of Keytesville needed a reliable and convenient way to attract potential customers. This led, in 1889, to the construction of a streetcar line, something one would only expect in much larger cities. Hugo Bartz and J. J. Moore, two prominent citizens of the time, secured land and financing for the project, which when completed consisted of two miles of track, and a large barn for horses and rolling stock, constructed for a cost of $10,000.[8] Two horse-drawn passenger coaches and a large flatcar for freight delivered new arrivals at the Wabash depot to the town.

While small, the town does have an active business district and chamber of commerce. Included are a grocery, insurance sales, bank, convenience store, law offices, chiropractor, restaurant, auto repair, agricultural services and medical clinic.[9] The town has various service clubs and organizations, including the Lions Club. There are three sites in Keytesville listed on the National Register of Historic Places: the First Presbyterian Church, the Chariton County Jail and Sheriff's residence, and the Redding-Hill House. A new Chariton County Courthouse was constructed in Keytesville in the summer of 1974 and occupied the following July. This was made necessary due to a fire that destroyed the previous courthouse on August 27, 1973.[13]

Keytesville, a Missouri 4th class city, governs by a mayor-council system. Voters elect two aldermen from two wards, each serving a two-year term, and a mayor at-large, also for a two-year term.[9] The Keytesville Fire District, a volunteer force, provides fire protection for the town and surrounding rural area. law enforcement duties are handled by the Chariton County Sheriff's Department. The department headquarters and county jail are located in Keytesville. The city of Keytesville operates a municipal swimming pool and two parks. One of the parks provides camping opportunities with full hookup available. 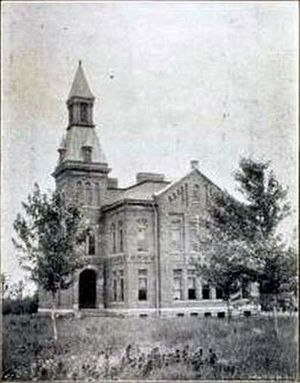 Keytesville R-III School district serves the town of Keytesville and surrounding rural area. Education in the community dates to before the Civil War, but many records indicating the exact date were lost in an 1861 fire at the county clerk's office.[14] In 1889, what might be considered the first modern-style school, a large 2-story building, was erected at a cost of $13,000[15] By 1909, Keytesville school was rated a first-class school by the state of Missouri. In 1949, a large number of the rural schools were combined with Keytesville to form the current district.[14] The current high school was constructed in 1959, with the current elementary school added in 1967. In 2010, the district had a total of 153 students K-12, and a graduation rate of 90-percent.[16] The school mascot is the Tiger and school colors are black and gold. Keytesville competes athletically in the Central Activities Conference. Its enrollment places the Tigers in Class 1 under Missouri State High School Activities Association guidelines.

There were 225 households of which 20.0% had children under the age of 18 living with them, 42.2% were married couples living together, 7.6% had a female householder with no husband present, 5.3% had a male householder with no wife present, and 44.9% were non-families. 40.0% of all households were made up of individuals and 16.4% had someone living alone who was 65 years of age or older. The average household size was 2.07 and the average family size was 2.71.

There were 253 households out of which 22.5% had children under the age of 18 living with them, 40.7% were married couples living together, 7.1% had a female householder with no husband present, and 49.0% were non-families. 45.5% of all households were made up of individuals and 27.7% had someone living alone who was 65 years of age or older. The average household size was 2.07 and the average family size was 2.96.