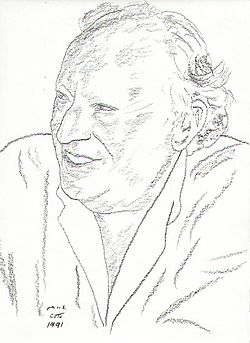 Uris was born in Baltimore, Maryland, the son of Jewish American parents Wolf William and Anna (Blumberg) Uris. His father, a Polish-born immigrant, was a paperhanger, then a storekeeper. His mother was first-generation Russian American.[2] William spent a year in Palestine after World War I before entering the United States. He derived his surname from Yerushalmi, meaning "man of Jerusalem". (His brother Aron, Leon's uncle, took the name Yerushalmi.) "He was basically a failure", Uris later said of his father. "I think his personality was formed by the harsh realities of being a Jew in Czarist Russia. I think failure formed his character, made him bitter."[3]

At age six, Uris reportedly wrote an operetta inspired by the death of his dog. He attended schools in Norfolk, Virginia and Baltimore, but never graduated from high school, and failed English three times. When he was 17 and in his senior year of high school, the Japanese attacked Pearl Harbor and he enlisted in the United States Marine Corps. He served in the South Pacific, where he was stationed in New Zealand, and fought as a radioman in combat on Guadalcanal and Tarawa[4] from 1942 through 1945. While recuperating from malaria in San Francisco, he met Betty Beck, a Marine sergeant; they married in 1945.

File:Leon Uris with patrol.jpg
Uris in Israel in the 1950s

Coming out of the service, he worked for a newspaper, writing in his spare time. Esquire magazine, in 1950, bought an article, and he began to devote himself to writing more seriously. Drawing on his experiences in Guadalcanal and Tarawa, he produced the best-selling Battle Cry, a novel depicting the toughness and courage of U.S. Marines in the Pacific. He then went to Warner Brothers in Hollywood helping to write the movie, which was extremely popular with the public, if not the critics.[4] He went on to write The Angry Hills, a novel set in war-time Greece.

His best-known work may be Exodus, which was published in 1958. Most sources indicate Uris, motivated by an intense interest in Israel, financed his research for the novel by selling the film rights in advance to MGM and by writing newspaper articles about the Sinai campaign.[5][6][7] It is said that the book involved two years of research, and involved thousands of interviews.[8] Exodus illustrated the history of Palestine from the late 19th century through the founding of the state of Israel in 1948 from a zionist point of view.[9][10][11] It was a worldwide best-seller, translated into a dozen languages, and was made into a feature film in 1960, starring Paul Newman, directed by Otto Preminger, as well as into a short-lived Broadway musical (12 previews, 19 performances) in 1971.[12] Uris' 1967 novel Topaz was adapted for the screen and directed by Alfred Hitchcock in 1969.[13]

Uris's subsequent works included: Mila 18, about the Warsaw ghetto uprising; Armageddon: A Novel of Berlin, a chronicle which ends with the lifting of the Berlin Blockade in 1949; Trinity, about Irish nationalism and the sequel, Redemption, covering the early 20th century and World War I; QB VII, about the role of a Polish doctor in a German concentration camp; and The Haj, set in the history of the Middle East. He wrote the screenplays for Battle Cry and Gunfight at the O.K. Corral. His work having to do with the subject of Israel has been criticized for being biased against Arabs.[14][15][16]

Uris was married three times. His first wife was Betty Beck, whom he married in 1945. They had three children before divorcing in 1968. He then married Marjorie Edwards in 1968, who committed suicide by gunshot the following year.[17] His third and last wife was Jill Peabody, with whom he had two children. They married in 1970, when she was 22 years old and he was 45; the couple divorced in 1989.

Leon Uris died of renal failure at his Long Island home on Shelter Island in 2003, aged 78.[4] His papers can be found at the Ransom Center, University of Texas in Austin. The collection includes all of Uris's novels, with the exception of The Haj and Mitla Pass, as well as manuscripts for the screenplay, Gunfight at the O.K. Corral.[13]