The Levallois technique of flint-knapping

Lithic reduction involves the use of a hard hammer percussor, such as a hammerstone, a soft hammer fabricator (made of wood, bone or antler), or a wood or antler punch to detach lithic flakes from a lump of tool stone called a lithic core (also known as the "objective piece"). As flakes are detached in sequence, the original mass of stone is reduced; hence the term for this process. Lithic reduction may be performed in order to obtain sharp flakes, on which a variety of tools can be made, or to rough out a blank for later refinement into a projectile point, knife, or other object. Flakes of regular size that are at least twice as long as they are broad are called blades. Lithic tools produced this way may be bifacial (exhibiting flaking on both sides) or unifacial (exhibiting flaking on one side only).

Cryptocrystalline or amorphous stone such as chert, flint, obsidian, and chalcedony, as well as other fine-grained stone material, such as rhyolite, felsite, and quartzite, were used as a source material for producing stone tools. As these materials lack natural planes of separation, conchoidal fractures occur when they are struck with sufficient force. The propagation of force through the material takes the form of a Hertzian cone that originates from the point of impact and results in the separation of material from the objective piece, usually in the form of a partial cone, commonly known as a lithic flake. This process is predictable, and allows the flintknapper to control and direct the application of force so as to shape the material being worked. Controlled experiments may be performed using glass cores and consistent applied force in order to determine how varying factors affect core reduction.[1]

By understanding the complex processes of lithic reduction, archaeologists recognize that the pattern and amount of reduction contribute tremendous effect to lithic assemblage compositions. One of the measurements is the geometric index of reduction. There are two elements in this index: 't' and 'T'. The 'T' is the 'height' of maximum blank thickness and the 't' is the height of retouched scar from the ventral surface. The ratio between t and T is the geometric index of reduction. In theory this ratio shall range between 0 and 1.[2] The bigger the number is the larger amount of lost weight from lithic flake. By using a logarithmic scale, a linear relationship between the geometric index and the percentage of original flake weight lost through retouch is confirmed.[3] In choosing a reduction index, it is important to understand the strengths and weaknesses of each method, and how they fit to the intended research question, as different indices provide different levels of information.[4] For example, Kuhn's geometric index of unifacial reduction (GIUR), which describes the ratio of scar height relative to the flake thickness, is highly influenced by the morphology of the flake blank which limits the applicability of this reduction index.[5]

It has been shown that stages in the lithic reduction sequence may be misleading and that a better way to assess the data is by looking at it as a continuum. The assumptions that archaeologists sometimes make regarding the reduction sequence based on the placement of a flake into a stage can be unfounded. For example, a significant amount of cortex can be present on a flake taken off near the very end of the reduction sequence.[6]

Removed flakes exhibit features characteristic of conchoidal fracturing, including striking platforms, bulbs of force, and occasionally eraillures (small secondary flakes detached from the flake's bulb of force). Flakes are often quite sharp, with distal edges only a few molecules thick when they have a feather termination. These flakes can be used directly as tools or modified into other utilitarian implements, such as spokeshaves and scrapers.

Percussion reduction, or percussion flaking, refers to removal of flakes by impact. Generally, a core or other objective piece, such as a partially formed tool, is held in one hand, and struck with a hammer or percussor. Alternatively, the objective piece can also be struck between a stationary anvil-stone, known as bipolar percussion. Percussion can also be done by throwing the objective piece at an anvil stone. This is sometimes called projectile percussion. Percussors are traditionally either a stone cobble or pebble, often referred to as a hammerstone, or a billet made of bone, antler, or wood. Often, flakes are struck from a core using a punch, in which case the percussor never actually makes contact with the objective piece. This technique is referred to as indirect percussion.[7] 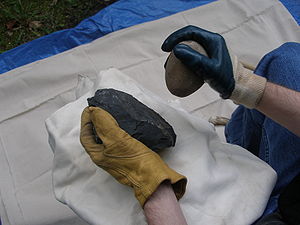 An example of hard hammer percussion.

Projectile percussion is so basic as to not be considered a technique. It involves throwing the toolstone at a stationary anvil stone. This method provides virtually no control over how the toolstone will fragment, and therefore produces a great deal of shatter, and few flakes. It is difficult to be sure whether or not this method of lithic reduction was ever a commonplace practice, although noting sharp edges on a broken rock might have led early man to first recognize the value of lithic reduction. 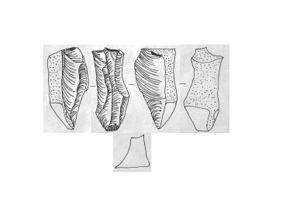 This image is an example of an obsidian core that has had flakes removed using bipolar percussion.

An alternative view of the bipolar reduction technique is offered by Jan Willem Van der Drift which contradicts the suggestion that there is little control over fracturing. The characteristics of bipolar reduction are different from that occurring in conchoidal fracture and are therefore often misinterpreted by archaeologists and lithic experts.

Hard hammer techniques are generally used to remove large flakes of stone. Early flintknappers and hobbyists replicating their methods often use cobbles of very hard stone, such as quartzite. This technique can be used by flintknappers to remove broad flakes that can be made into smaller tools. This method of manufacture is believed to have been used to make some of the earliest stone tools ever found, some of which date from over 2 million years ago.[8]

It is the use of hard-hammer percussion that most often results in the formation of the typical features of conchoidal fracture on the detached flake, such as the bulb of percussion and compression rings.[9] 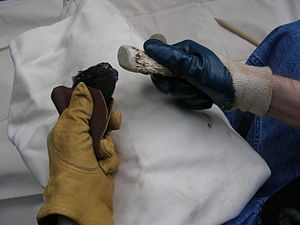 An example of soft hammer percussion

Soft-hammer percussion involves the use of a billet, usually made of wood, bone or antler as the percussor. These softer materials are easier to shape than stone hammers, and therefore can be made into more precise tools. Soft hammers also deform around the sharp edges of worked stone, rather than shattering through them, making it desirable for working tool stone that already has been worked to some degree before. Soft hammers of course also do not have as much force behind them as hard hammers do. Flakes produced by soft hammers are generally smaller and thinner than those produced by hard-hammer flaking; thus, soft-hammer flaking is often used after hard-hammer flaking in a lithic reduction sequence to do finer work.[10] As well as this, soft-hammers can produce longer flakes which aid in the conservation of materials because they produce a longer cutting edge per unit of mass lost.[11]

In most cases, the amount of pressure applied to the objective piece in soft-hammer percussion is not enough for the formation of a typical conchoidal fracture. Rather, soft-hammer flakes are most often produced by what is referred to as a bending fracture, so-called because the flake is quite literally bent or "peeled" from the objective piece. However, it should be noted that a bending fracture can be produced with a hard hammer.[12] Flakes removed in this manner lack a bulb of percussion, and are distinguished instead by the presence of a small lip where the flake's striking platform has separated from the objective piece.[13]

Since indirect percussion can be so precisely placed, the platform is often much smaller on flakes produced in this way than in other methods of flake removal. Of course, indirect percussion requires two hands to hold the percussing tool set. One holds the hammer, and one holds the punch. Therefore, modern hobbyists must use a third object in order to hold the targeted piece of tool stone while they strike it. Often, some sort of clamp or vise is used. No evidence for such devices has yet been found in the archaeological record, but this is partly because they would normally be made of perishable materials, and partly because they can have great variation in design. 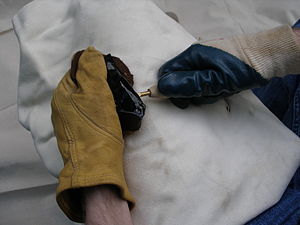 An example of pressure flaking

Pressure flaking is a method of trimming the edge of a stone tool by removing small lithic flakes by pressing on the stone with a sharp instrument rather than striking it with a percussor. This method, which often uses punches made from bone or antler tines (or, among modern hobbyists, copper punches or even nails), provides a greater means of controlling the direction and quantity of the applied force than when using even the most careful percussive flaking. Copper retoucheurs to facilitate this process were widely employed in the Early Bronze Age – and may therefore be associated with Beaker Culture in northwestern Europe.

Usually, the objective piece is held clasped in the flintknapper's hand, with a durable piece of fabric or leather protecting the flintknapper's palm from the sharpness of the flakes removed. The tip of the flaking tool is placed against the edge of the stone tool and pressed hard, removing a small linear or lunate flake from the opposite side. The process also involves frequent preparation of the edge to form better platforms for pressing off flakes. This is usually accomplished with abraiders made from a coarse-grained stone such as basalt or quartzite. Great care must be taken during pressure flaking so that perverse fractures that break the entire tool do not occur. Occasionally, outrepasse breaks occur when the force propagates across and through the tool in such a way that the entire opposite margin is removed.[14]

The use of pressure flaking facilitated the early production of sharper and more finely detailed tools. Pressure flaking also gave toolmakers the ability to create notches where the objective piece could be bound more securely to the shaft of the weapon or tool and increasing the object's utility.

An archaeological discovery in 2010 in Blombos Cave, South Africa, places the use of pressure flaking by early humans to make stone tools back to 73,000 BCE, 55,000 years earlier than previously accepted. The previously accepted date, "no more than 20,000 years ago",[15] was based upon the earliest evidence previously available, which derived from findings of the Upper Paleolithic Solutrean culture in France and Spain.[16]

A blank is a thick, shaped stone biface of suitable size and configuration for refining into a stone tool. Blanks are the beginning products of lithic reduction, and during prehistoric times were often created for trade or later refinement at another location. Blanks were often formed through the initial reduction of lumps of tool stone at simple quarries, often no more than easily accessible outcroppings of the local tool stone (although this was certainly not the case at Grimes Graves in England). Sometimes the shape of the blank hints at the shape of the final tool it will become, but this is not always the case. A blank may consist of either a large, unmodified flake or a reduced core, often with a rough subtriangular or lanceolate shape. Rough chopping tools, derived by removing a few flakes along one edge of the cobble, can also be considered to fall into this group.

A preform is the rough, incomplete and unused basic form of a stone tool. Typically, a preform is the shaped remnant of a lithic core. Larger and thicker than the intended tool, it lacks the final trimming and refinement that is present in the completed artifact. Sometimes basic features such as stems and notches have been initiated. In most cases, the term refers to an incomplete projectile point.