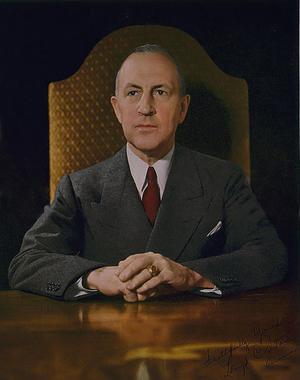 Stark was born in Louisiana, Missouri, the son of Clarence McDowell and Lillie Crow Stark. Stark was a 1908 graduate of the United States Naval Academy.[1] After serving four years as a naval officer, Stark went into the family business, the Stark Brothers' Nursery, as vice-president and general manager. He was a major in the U.S. Army during World War I. During his volunteer stint, he served in the United States and France, including the 1918 Meuse-Argonne offensive.[2]

Stark's political career began in 1928 when he chaired Missouri's State Highway Bond Campaign. He served one term as the Governor of Missouri from 1937 to 1941 and was a delegate to Democratic National Convention from Missouri in 1940. During his gubernatorial term, Stark's administration established the Ellis Fischel Cancer Center, abolished interstate trade barriers, passed a police reorganization bill, and established a merit system for selection of state employees.[2]

Lloyd Stark had a fierce political rivalry with Harry S. Truman, against whom he ran for the Senate in 1940—and lost when he and the prosecutor (Maurice M. Milligan), who toppled the Kansas City political machine, split the anti-Pendergast vote in the Democratic primary. Although the loss to Truman heralded the end of Stark's political career, he spent the remainder of his working life managing the Stark Brothers Nurseries. During this time, Stark influenced the political careers of Clarence Cannon and Stuart Symington.[2] Stark died in Clayton, Missouri in 1972.

The falling out between Stark and Kansas City Boss Tom Pendergast following the 1936 election is widely believed to have been the turning point in Boss Tom's fall from power. Pendergast held so much sway in Missouri in the 1930s that the governor's mansion had been dubbed "Uncle Tom's Cabin." Stark sought and received Pendergast's support. Pendergast's minions were more corrupt and obvious than usual in the 1936 election. This prompted numerous investigations and Stark turned overtly against Pendergast who was eventually convicted of income tax evasion.[3]

Lloyd Stark was part of a family rather prominent in Missouri and was active with his brother Paul Stark in the then family-owned business Stark Brothers' Nursery (the oldest Nursery in America and at one time the largest in the world). The nursery claims to have popularized the Golden Delicious apple.

He married Margaret Pearson Stickney of Baltimore in 1908. Together they had sons Lloyd Stickney and John Wingate Stark. Margaret died in 1930. Stark then married Katherine Lemoine Perkins in 1931. They had two daughters, Mary Murray Spottswood and Katherine Lemoine Stark.[2]

Stark's cousin, Charles Stark Draper, was a prominent inventor. The uncle of Lloyd Stark and Charles Stark Draper, state representative, James O. Stark was a prominent supporter and adviser of presidential contender and Speaker of the House, Champ Clark (despite this connecection, Clark's son Bennett, Missouri's other Senator, crucially supported Truman in 1940) - and the husband of the niece of Republican anti-slavery activist Elihu Washburne.