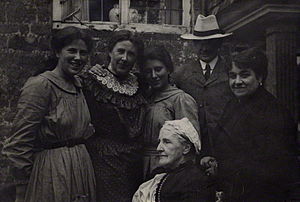 Logan Pearsall Smith (18 October 1865 – 2 March 1946) was an American-born British essayist and critic. Harvard and Oxford educated, he was known for his aphorisms and epigrams, and was an expert on 17th Century divines. His Words and Idioms made him an authority on correct English language usage. He wrote his autobiography, Unforgotten Years, for which he may be best remembered.

The denunciation of the young is a necessary part of the hygiene of older people, and greatly assists in the circulation of their blood.

Smith was born in Millville, New Jersey.[2] He was the son of the prominent Quakers Robert Pearsall Smith and Hannah Whitall Smith and a descendant of James Logan, who was William Penn's secretary and the Chief Justice of Pennsylvania in the 18th century.[3][4] His mother's family had become wealthy from its glass factories.[3][4][5] He lived for a time as a boy in England.[6] In his 1938 autobiography, Smith describes how in his youth he came to be a friend of Walt Whitman in the poet's latter years.[7]

Pearsall attended The William Penn Charter School in Philadelphia, Haverford College, Harvard College, and the University of Berlin.[6] Smith later studied at Balliol College, Oxford, where he graduated in 1891.[7]

Smith employed a succession of young secretary/companions to help him. This post was Cyril Connolly's first job in 1925 and he was to be strongly influenced by Smith. Robert Gathorne-Hardy succeeded Connolly in this post.[8]

Every author, however modest, keeps a most outrageous vanity chained like a madman in the padded cell of his breast.

Smith was an authority on 17th century divines. He was known for his aphorisms and epigrams, and his Trivia has been highly rated. He was a literary perfectionist and could take days refining his sentences.[8] With Words and Idioms he became a recognised authority on the correct use of English. He is now probably most remembered for his autobiography Unforgotten Years (1938). He was much influenced by Walter Pater. As well as his employees listed, his followers included Desmond MacCarthy, John Russell, R. C. Trevelyan, and Hugh Trevor-Roper. He was, in part, the basis for the character of Nick Greene (Sir Nicholas Greene) in Virginia Woolf's Orlando.[9]

He settled in England after Oxford with occasional forays to continental Europe and became a British subject in 1913. He divided his time between Chelsea, where he was a close friend of Desmond MacCarthy and Rose Macaulay,[7] and a Tudor farmhouse near the Solent, called "Big Chilling".[8]

Gathorne-Hardy described Pearsall Smith as "a largish man with a stoop that disguised his height",.[10] Kenneth Clark further wrote "His tall frame, hunched up, with head thrust forward like a bird, was balanced unsteadily on vestigial legs".[11]

His portrait, made in 1932 by Ethel Sands, is at the National Portrait Gallery, London.[12]