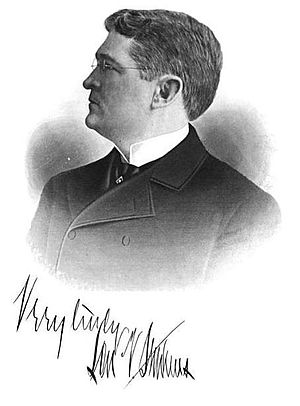 Stephens was born in Boonville, Missouri to Joseph L. and Martha (Gibson) Stephens. His father was descended from Scotch ancestry, which founded families in Virginia and North Carolina in Colonial days, and his paternal grandparents came to Missouri from the "Old Dominion" at an early period, locating in Cooper County. Joseph Stephens, who was born there, became distinguished as a lawyer, financier and railroad builder

Stephens studied first in the public schools of Boonville, and then for three years at the Cooper Institute, and three years at the Kemper Family school of the same town.[1] During the intervals of his student life acquired a knowledge of printing and telegraphy, besides working as a bank messenger, bookkeeper and teller. He studied for one year at Washington and Lee University in Lexington, Virginia, and there became interested in finance and economics. After completing his education traveled extensively in Europe.

Returning home, Stephens entered the Central National Bank, of Boonville, management by his father, and became director, assistant cashier and vice president. During his connection with this institution he and his brother, W. Speed Stephens, funded the debts of various counties in central Missouri. Stephens was also involved in politics, acting as an aide-de-camp on the staff of Governor John Marmaduke.[1] In 1887, at the age of twenty-nine, he was appointed by the comptroller of the currency as receiver of the Fifth National Bank, of St. Louis. Its affairs were convoluted, and experienced financiers doubted the ability of so young a man to master so difficult a task. He succeeded in closing up the affairs of the bank in a brief time, the depositors receiving 96 per cent upon their accounts, when only 33 1–3 per cent was expected, and the achievement at once gave him high standing in financial circles.

Stephens thereafter was paymaster-general on the staff of Governor David R. Francis.[1] His success with the Fifth National Bank contributed materially to his appointment, in March, 1890, by Governor Francis, to the position of State treasurer, to fill the unexpired term of Edward T. Noland. The affairs of the treasury were in poor condition, and the credit of the State was imperiled. The appointment of Stephens met with general approval, and the state's finances were within two years re-established upon a sound basis

In 1892 the Democratic State convention nominated him to the position on the first ballot, and he won the general election by a plurality of more than 40,000 votes. During the four years following, the free silver question became the dominant issue in politics. Although he remained an officer in a national bank during the campaigns of 1894–6, Stephens took up the cause of bimetallism, contributing both money and time to the support of the silver standard. For over two years he contributed to the Boonville Advertiser a series of weekly articles upon the subject, under the caption, "Silver Nuggets", which were republished in many of the Democratic papers of the State, and in pamphlet form, and distributed, under the direction of the State Democratic central committee.

In the 1895, Stephens was nominated for governor by acclamation, the first time that Missouri Democrats had done so. In the 1896 general election, he received a plurality of nearly 44,000 votes, running 10,000 votes ahead of the State ticket. As Governor, he was an outspoken supporter of the Free Silver movement, and he supported the state university and other State schools, as well as the penal and eleemosynary institutions. Under his administration, the State penitentiary was made not only self-sustaining, but a source of revenue to the State. The three existing insane asylums being filled to capacity, he supported bills establishing a new asylum in the southwest, and a colony for the feebleminded. He successfully pushed for legislation providing for a State fair to be held under the auspices of the State Board of Agriculture, and laid the groundwork for Missouri to host the 1904 Louisiana Purchase Exposition.

Stephens also strongly supported progressive taxation, arguing to increase the taxation of wealthy corporations in proportion to their real value, in order that to reduce the burden on farmers and small property holders. During the two sessions of the Thirty-ninth and Fortieth General Assemblies, he advocated the passage of laws taxing franchises, and upon learning that his efforts might prove unavailing, he transmitted a special message upon the subject. He was also instrumental in the passage of laws to check trusts in their encroachments upon smaller industries. He devoted much of his political energy to the support of William Jennings Bryan in the 1900 presidential election, and is largely credited with Bryan's substantial victory in Missouri. One of his speeches, entitled, "Why I am a Democrat," made during a political canvass, was extensively copied by the press of the country.[1]

Stephens married Margaret Nelson on October 5, 1880. With his wife, Stephens was a member of the Methodist Episcopal Church. He contributed liberally to the Central College, of Fayette, which named the "Stephens Scientific Hall" in his honor. After his term as governor, he returned to the banking business. He died in St. Louis, and was interred in Walnut Grove Cemetery.