Alfred Louis Charles de Musset-Pathay (French: [al.fʁɛd də my.sɛ]; 11 December 1810 – 2 May 1857) was a French dramatist, poet, and novelist.[1][2] Along with his poetry, he is known for writing the autobiographical novel La Confession d'un enfant du siècle (The Confession of a Child of the Century).[2] 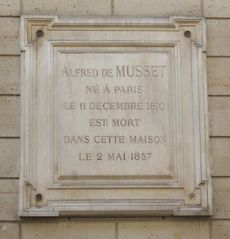 Musset was born in Paris. His family was upper-class but poor and his father worked in various key government positions, but never gave his son any money. His mother came from similar circumstances, and her role as a society hostess—for example her drawing-room parties, luncheons and dinners held in the Musset residence—left a lasting impression on young Alfred.[2]

Early indications of Musset's boyhood talents were seen by his fondness for acting impromptu mini-plays based upon episodes from old romance stories he had read.[2] Years later, elder brother Paul de Musset would preserve these, and many other details, for posterity, in a biography on his famous younger brother.[2]

Alfred de Musset entered the lycée Henri-IV at the age of nine, where in 1827 he won the Latin essay prize in the Concours général. With the help of Paul Foucher, Victor Hugo's brother-in-law, he began to attend, at the age of 17, the Cénacle, the literary salon of Charles Nodier at the Bibliothèque de l'Arsenal. At 18, he translated De Quincey's Confessions of an English Opium-Eater.[3] After attempts at careers in medicine (which he gave up owing to a distaste for dissections), law,[1] drawing, English and piano, Musset became one of the first Romantic writers, with his first collection of poems, Contes d'Espagne et d'Italie (1829, Tales of Spain and Italy).[1] By the time he reached the age of 20, his rising literary fame was already accompanied by a sulphurous reputation fed by his dandy side.

He was the librarian of the French Ministry of the Interior under the July Monarchy. During this time he also involved himself in polemics during the Rhine crisis of 1840, caused by the French prime minister Adolphe Thiers, who as Minister of the Interior had been Musset's superior. Thiers had demanded that France should own the left bank of the Rhine (described as France's "natural boundary"), as it had under Napoleon, despite the territory's German population. These demands were rejected by German songs and poems, including Nikolaus Becker's Rheinlied, which contained the verse: "Sie sollen ihn nicht haben, den freien, deutschen Rhein ..." (They shall not have it, the free, German Rhine). Musset answered to this with a poem of his own: "Nous l'avons eu, votre Rhin allemand" (We've had it, your German Rhine).

The tale of his celebrated love affair with George Sand in 1833-1835[1] is told from his point of view in his autobiographical novel La Confession d'un Enfant du Siècle (The Confession of a Child of the Century) (1836),[1] which was made into a 1999 film Children of the Century and a 2012 film Confession of a Child of the Century, and is told from her point of view in her Elle et lui (1859). Musset's Nuits (Nights) (1835–1837) traces the emotional upheaval of his love for George Sand from early despair to final resignation.[1] He is also believed to be the anonymous author of Gamiani, or Two Nights of Excess (1833), a lesbian erotic novel also believed to be modeled on George Sand.[4] 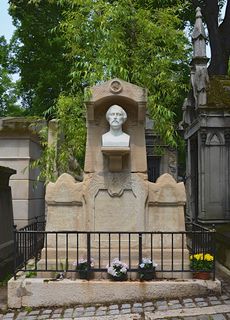 Musset was dismissed from his post as librarian by the new minister Ledru-Rollin after the revolution of 1848. He was however appointed librarian of the Ministry of Public Instruction in 1853.

Alfred de Musset died in his sleep in Paris in 1857. The cause was heart failure, the combination of alcoholism and a longstanding aortic insufficiency. One symptom that had been noticed by his brother was a bobbing of the head as a result of the amplification of the pulse; this was later called de Musset's sign.[5] He was buried in Père Lachaise Cemetery in Paris. 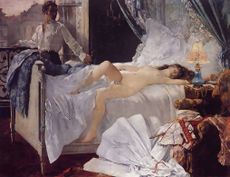 The French poet Arthur Rimbaud was highly critical of Musset's work. Rimbaud wrote in his Letters of a Seer (Lettres du Voyant) that Musset did not accomplish anything because he "closed his eyes" before the visions (Letter to Paul Demeny, May 1871).

Henri Gervex's 1878 painting Rolla was based on a poem by de Musset. It was rejected by the jury of the Salon de Paris for immorality, since it depicted a scene from the poem of a naked prostitute after having sex with her client – but the controversy helped Gervex's career.

Georges Bizet's opera Djamileh (1871, with a libretto by Louis Gallet) is based on Musset's story Namouna.[6] Bizet also set Musset's poem "A Une Fleur" for voice and piano.

Dame Ethel Smyth composed an opera based on Fantasio that premiered in Weimar in 1898.

Lorenzaccio, which takes place in Medici's Florence, was set to music by the musician Sylvano Bussotti in 1972.