Louis Thomas McFadden (July 25, 1876 – October 1, 1936) was a Republican member of the United States House of Representatives from Pennsylvania, serving from 1915 to 1935. A banker by trade, he was an opponent of the Federal Reserve System and was the chief sponsor of the 1927 McFadden Act, which limited federal branch banks to the city in which the main branch operates.

However, he is most known for his belief in a Jewish conspiracy, which eventually saw him lose his seat in the House of Representatives.

McFadden was born in Granville Center, Troy Township, Bradford County, Pennsylvania. He graduated from Warner's Commercial College (currently known as the Elmira Business Institute) in Elmira, New York. In 1892, he entered the employ of the First National Bank in Canton, Pennsylvania.

McFadden served as treasurer of the Pennsylvania Bankers' Association in 1906 and 1907, and as president in 1914 and 1915. He was appointed in 1914 by the agricultural societies of the State of Pennsylvania as a trustee of Pennsylvania State College.[1]

In 1914, McFadden was elected as a Republican Representative to the Sixty-fourth Congress and to the nine succeeding Congresses.[1] He served as Chairman of the United States House Committee on Banking and Currency during the Sixty-sixth through Seventy-first Congresses, or 1920-1931.[1] Though re-elected without opposition in 1932, he lost to the Democratic nominee in 1934. He was an unsuccessful candidate for nomination in 1936.[1]

McFadden's main official legacy was the working on and the passing of the McFadden Act of 1927, limiting federal branch banks to the city in which the main branch operates. The Act sought to give national banks competitive equality with state-chartered banks by letting national banks operate branch banks to the extent permitted by state law. The McFadden Act specifically prohibited interstate branching by allowing national banks to branch only within the state in which they were situated. Although the Riegel-Neal Interstate Banking and Branching Efficiency Act of 1994 repealed this provision of the McFadden Act, it specified that state law continues to control intrastate branching, or branching within a state's borders, for both state and national banks. 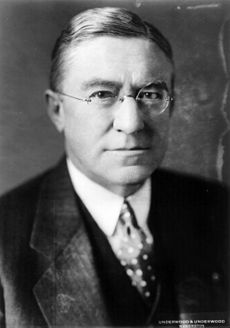 McFadden was a "vociferous foe of the Federal Reserve",[2] which he claimed was created and operated by Jewish banking interests who conspired to economically control the United States. On June 10, 1932, McFadden made a 25-minute speech before the House of Representatives,[3] in which he accused the Federal Reserve of deliberately causing the Great Depression. McFadden also claimed that Wall Street bankers funded the Bolshevik Revolution[4] through the Federal Reserve banks and the European central banks with which it cooperated.

After the expulsion from Washington D.C. of the veteran petitioners of the Bonus Army, which he called "the greatest crime in modern history", McFadden moved to impeach President Herbert Hoover in 1932,[5] and he also introduced a resolution bringing conspiracy charges against the Board of Governors of the Federal Reserve. The impeachment resolution was defeated by a vote of 361 to 8; it was seen as a big vote of confidence to President Hoover from the House.[6] According to Time magazine McFadden was “denounced and condemned by all Republicans for his ‘contemptible gesture’."[6][2] The Central Press Association reported that he was "virtually read out of his party ... [had] his committee posts ... taken away from him…was ostracized by Republicans [and] called crazy ...".[7] Sen. David A. Reed (R-PA) said “We intend to act to all practical purposes as though McFadden had died”.[8]

In 1933, he introduced House Resolution No. 158, which included articles of impeachment for the Secretary of the Treasury, two assistant Secretaries of the Treasury, the Board of Governors of the Federal Reserve, and the officers and directors of its twelve regional banks.[9]

According to McFadden's Jewish Telegraphic Agency obituary: "In January 1935, he announced his candidacy for president with the backing of an organization called 'the Independent Republican National Christian-Gentile Committee' on a platform to 'keep the Jew out of control of the Republican Party!'"[12] Not garnering much support for his presidential bid, he tried to win back his congressional seat. He lost the nomination by a wide-margin to Col. Albert G. Rutherford [13][14] who went on to win the general election.

He was in New York City visiting with his wife and son in late September 1936, when he was taken ill at his hotel and died of coronary thrombosis[15][16] shortly thereafter in the Hospital for Ruptured and Crippled, in Manhattan.[12][17] He was interred in East Canton Cemetery in Canton, Pennsylvania.[1]