From Infogalactic: the planetary knowledge core
(Redirected from Louisville Courier-Journal)
Jump to: navigation, search
"Courier Journal" redirects here. For the Oxford newspaper previously known by this name, see Oxford Journal.
Not to be confused with Journal & Courier or Journal-Courier.

The Courier-Journal, locally called "The C-J", is the main newspaper for the city of Louisville, Kentucky, United States. According to the 1999 Editor & Publisher International Yearbook, the paper is the 48th largest daily paper in the U.S. and the single largest in Kentucky.

The Courier-Journal was created from the merger of several newspapers introduced in Kentucky in the 1800s.

Pioneer paper The Focus of Politics, Commerce and Literature, was founded in 1826 in Louisville when the city was an early settlement of less than 7,000 individuals. In 1830 a new newspaper, The Louisville Daily Journal, began distribution in the city and, in 1832, absorbed The Focus of Politics, Commerce and Literature. The Journal was an organ of the Whig Party, founded and edited by George D. Prentice, a New Englander who initially came to Kentucky to write a biography of Henry Clay. Prentice would edit the Journal for more than 40 years.

In 1868, an ailing Prentice persuaded the 28-year-old Henry Watterson to come edit for the Journal. During secret negotiations in 1868, The Journal and the Courier merged and the first edition of The Courier-Journal was delivered to Louisvillians on Sunday morning, 8 November 1868. 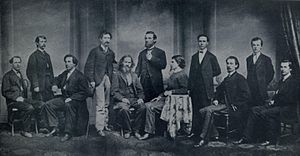 Editorial staff of The Courier-Journal, 1868.

Henry Watterson, the son of a Tennessee congressman, had written for Harper's Magazine and the New York Times before enlisting in the Confederate Army. He became nationally known for his work as The Courier-Journal emerged as the region's leading paper. He supported the Democratic Party and pushed for the industrialization of Kentucky and the South in general, notably through urging the Southern Exposition be held in Louisville. He attracted controversy for attempting to prove that Christopher Marlowe had actually written the works of Shakespeare. He won a Pulitzer Prize in 1917 for editorials demanding the United States enter World War I.[2]

The Courier-Journal founded a companion afternoon edition of the paper, The Louisville Times, in May 1884. In 1896, Watterson and Haldeman opposed Democratic presidential candidate William Jennings Bryan over his support of "Free Silver" coinage. This unpopular decision upset readers and advertisers, many of whom pulled their support for The Courier-Journal. Kentucky voted for the Republican candidate in 1896, the first time in state history, and local political leaders blamed the Courier. Only the popularity of The Louisville Times, which had no strong editorial reputation, saved the newspaper company from bankruptcy. The Courier supported Bryan in future elections.[2]

Haldeman had owned the papers until his death in 1902, and by 1917 they were owned by his son, William, and Henry Watterson. 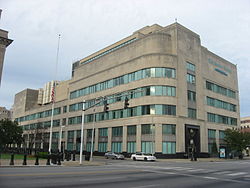 Courier-Journal offices in downtown Louisville, built during the Bingham era

On August 8, 1918, Robert Worth Bingham purchased two-thirds interest in the newspapers and acquired the remaining stock in 1920. The liberal Bingham clashed with longtime editor Watterson, who remained on board, but was in the twilight of his career. Watterson's editorials opposing the League of Nations appeared alongside Bingham's favoring it, and Watterson finally retired on April 2, 1919.[2]

I have always regarded the newspapers owned by me as a public trust and have endeavored so to conduct them as to render the greatest public service.

As publisher, Bingham set the tone for his editorial pages, and pushed for improved public education, support of African Americans and the poor of Appalachia. In 1933, the newspapers passed to his son, Barry Bingham, Sr. Barry Bingham would continue in his father's footsteps, guiding the editorial page and modernizing the paper by setting up several news bureaus throughout the state, expanding the news staff. During Barry Bingham, Sr.'s tenure, the paper was considered Kentucky's "Newspaper of Record" and consistently ranked among the 10 best in the nation.[2]

In 1971, Barry Bingham, Jr. succeeded his father as the newspapers' editor and publisher.

The Binghams were well-liked owners popularly credited with being more concerned with publishing quality journalism than making heavy profits. They also owned the leading local radio and television stations -- WHAS-TV, WHAS-AM, and WAMZ-FM—and Standard Gravure, a rotogravure printing company that printed the Courier-Journal's Sunday Magazine as well as similar magazines for other newspapers.

Barry Bingham Jr. sought to free the papers from conflicts of interests, and through The Louisville Times, experimented with new ideas such as signed editorials. Bingham Jr. also parted with tradition by endorsing several Republican candidates for office.[2]

Barry Bingham, Jr. served as editor and publisher until he resigned in 1986, shortly after his father announced that the newspaper company was for sale, in large measure because of disagreements between Bingham Jr. and his sister Sallie. 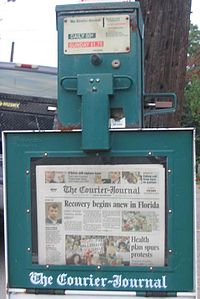 In July 1986, Gannett Company, Inc. purchased the newspaper company for $300 million and appointed George N. Gill President and Publisher. Gill had been with the newspaper and the Binghams for over two decades, working his way up from reporter to Chief Executive Officer of the Bingham Companies. In 1993, Gill retired and Edward E. Manassah became President and Publisher.

February 1987 saw the last publication of The Louisville Times, which like most afternoon papers had experienced declining readership; the news operations of the two papers had previously been consolidated under Gannett.

In 1989, the paper's news staff won the Pulitzer Prize for general local reporting for what the Pulitzer board called "exemplary initial coverage" of a collision that was the nation's worst drunk-criving crash and school-bus accident. In 2005, cartoonist Nick Anderson won the paper's 10th Pulitzer, but when he left for the Houston Chronicle, the paper did not replace him, instead relying largely on submissions from local cartoonists. One, lawyer Marc Murphy, has become a near-regular and gained respect for his work.

On December 3, 2008, it was announced that The C-J would lay off 51 employees, including 17 who voluntarily took buyout offers, as part of a larger cutback by Gannett due to financial losses.[3] Seven months later, the Courier-Journal announced another 44 layoffs, reducing the workforce to 575 employees.

The newspaper resumed polling on elections, and began videostreaming its editorial-board conferences with major candidates, under Publisher Arnold "Arnie" Garson, who came from the Argus Leader, Gannett's paper in Sioux Falls, S.D., in late 2008. Garson is an outspoken promoter of the future of printed newspapers in the digital age. Under him, the paper began keeping occasional major stories or sports columns off its website and promoting them as print exclusives. Most of these have run on Sundays; in July 2009, Garson announced that the paper's Sunday home-delivery circulation was up 0.5 percent over the previous year.