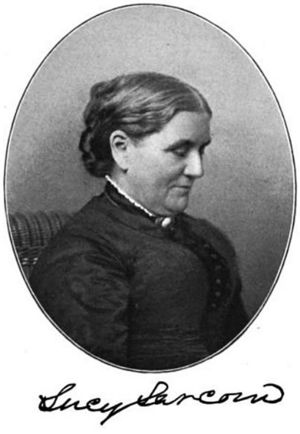 Larcom was born in Beverly, Massachusetts in 1824 as the ninth of ten children. Her father died when she was eight years old, causing her mother to become a boardinghouse keeper to bring in income for the family. At age eleven in 1835 she left home to work in cotton mills in Lowell as a doffer, hoping to earn some extra money for her family. She made a huge impact during her 10 years there; she wrote many songs, poems, and letters describing the mill-girl life, and got them published, and her idealistic poems caught the attention of John Greenleaf Whittier. She served as a model for the change in women's roles in society.

She was a friend of Harriet Hanson Robinson, who worked in the Lowell mills at the same time and who also became a poet and author. Much later, Robinson would become prominent in the women's suffrage movement.[1] Both contributed to the literary magazine Lowell Offering.[2]

In the 1840s (circa 1846), Larcom taught at a school in Illinois before returning to Massachusetts. She went on to become one of the first teachers at Wheaton Female Seminary (now Wheaton College) in Norton, Massachusetts and taught there from 1854 to 1862. While there she helped to found Rushlight Literary Magazine, a submission-based student literary magazine which is still published today. From 1865 to 1873 she was the editor of the Boston-based Our Young Folks, which merged with St. Nicholas Magazine in 1874.[3][4]

Larcom penned one of the best-known accounts of New England childhood of her time, A New England Girlhood, commonly used as a reference in studying early American childhood.

Larcom died at age 69 on April 17, 1893 in Boston and was buried in her hometown of Beverly, Massachusetts.

Larcom's influence is still felt in her hometown of Beverly. A local literary magazine entitled The Larcom Review is named for her, as is the library at the Beverly High School.

Larcom Mountain, located in the Ossipee Mountains in New Hampshire, is named after her, as she frequented the area during the late 1800s.

At Wheaton College (Massachusetts) in Norton, Massachusetts, the Larcom Dormitory is named after her. Rushlight Literary Magazine, which she founded, is still in publication today.

Larcom's legacy is honored in Lowell, Massachusetts, where she worked as a Mill Girl at the Boott Mills, and as such, the Lucy Larcom Park was named after her to honor her works of literature that recounted her life at the mills. The park can be found between the two Lowell High School buildings, and excerpts from her writings can be found on monuments, statues and other works of art throughout the park. 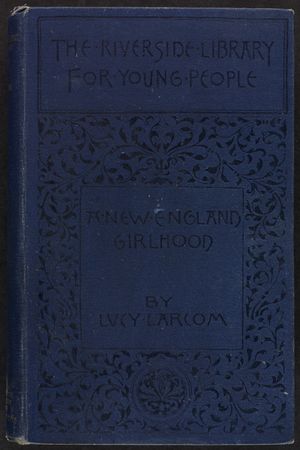