Luther Adler (May 4, 1903 – December 8, 1984) was an American actor best known for his work in theatre, but who also worked in film and television. He also directed plays on Broadway.

Adler was born Lutha Adler on May 4, 1903 in New York City. He was one of six children born to Russian Jewish actors Sara and Jacob P. Adler. His father was considered to be one of the founders of the Yiddish theatre in America.[1] His siblings also worked in theatre; his sister Stella Adler achieved fame as an actress and drama teacher. His brother Jay also achieved some fame as an actor.

Years in the Group Theatre 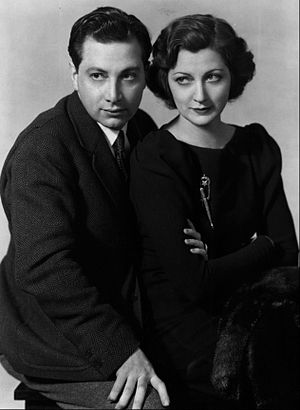 Luther Adler and his sister Stella in a 1936 publicity photo for their appearance in the Group Theater production of Awake and Sing!

In 1931 Adler became one of the original members of the Group Theatre (New York), a New York City theatre collective formed by Cheryl Crawford, Harold Clurman, and Lee Strasberg. The founders, as well as the actors in the group, "tended to hold left-wing political views and wanted to produce plays that dealt with important social issues."[4] The collective lasted for ten years, had twenty productions, and served as an inspiration for many actors, directors, and playwrights who came after it.[5] During those years, the Group's members included Luther, Luther's sister and brother, Stella Adler and Jay Adler, Elia Kazan, John Garfield, Paul Green (playwright), Howard Da Silva, Harry Morgan (billed as Harry Bratsburg), Franchot Tone, John Randolph, Joseph Bromberg, Michael Gordon, Will Geer, Clifford Odets and Lee J. Cobb.[4] Elia Kazan considered Adler to be the best actor working in the company.[6]

In 1932 Adler starred in John Howard Lawson's, Success Story and garnered rave reviews for his performance.[7] In 1933 Adler briefly joined the Katherine Cornell Company, playing opposite Cornell in Alien Corn,[8] but in 1934 he returned to the Group and played alongside his sister Stella in the Gold Eagle Guy. Unfortunately Gold Eagle Guy was not popular with audiences and had a short run. Adler had suspected the play would not succeed, remarking, shortly before it opened, "Boys, I think we're working on a stiff."[9] Adler went on to appear in Group Theatre (New York) productions: Awake and Sing! and Paradise Lost (both 1935),[2] and he performed with Frances Farmer in Golden Boy (1937).[10] He also appeared in Kurt Weill's anti-war musical Johnny Johnson (1936)[11] and originated the role of Captain Joshua in the 1939 Group Theater production of Thunder Rock. "By the late 1930s... the cohesiveness of the group began to crumble. The chronic financial problems and long-simmering disputes about 'the method' began to chip away at their solidarity... and in 1941 the group dissolved."[5]

After the Group Theatre

By the early 1940s Adler began to direct, but his first production They Should Have Stood in Bed closed after only eleven performances in 1942. His next directorial venture, A Flag is Born, ran for 120 performances in 1946 and featured newcomer Marlon Brando in one of the major roles.In 1965, when Zero Mostel left the Broadway cast of Fiddler on the Roof during a contract dispute, Adler took over the role of Tevye.

He also acted frequently on television in such programs as the anthology series, Crossroads, General Electric Theater, Kraft Television Theater and Robert Montgomery Presents. He guest-starred in such drama/adventure series as The Twilight Zone, in the episode "The Man in the Bottle" where he played Adolf Hitler in one scene reminiscent of his portrayal in The Desert Fox, The Untouchables, Ben Casey, 77 Sunset Strip, Mission: Impossible, Hawaii Five-O, most notably in the series' only three-part episode "'V' for Vashon", The Streets of San Francisco and Naked City and Route 66 .

Adler was married to actress Sylvia Sidney from 1938 until 1946, and father of Sidney's only child, her son Jacob, who predeceased her.

He died in Kutztown, Pennsylvania, and was buried in Mount Carmel Cemetery, Glendale, New York, next to several of his relatives, including his older sister Stella.