Malcolm Stevenson Forbes (August 19, 1919 – February 24, 1990) was an American entrepreneur most prominently known as the publisher of Forbes magazine, founded by his father B. C. Forbes. He was known as an avid promoter of capitalism and free market trade, and for an extravagant lifestyle, spending on parties, travel, and his collection of homes, yachts, aircraft, art, motorcycles, and Fabergé eggs.

Forbes was born on August 19, 1919 in Brooklyn, New York, the son of Adelaide (Stevenson) and Scottish-born financial journalist and author B. C. Forbes. He graduated from the Lawrenceville School in 1937[4] and Princeton University.[5] Forbes enlisted in the Army in 1942 and served as a machine gun sergeant in Europe. Forbes received a thigh wound in combat, and received a Bronze Star and a Purple Heart.[5] 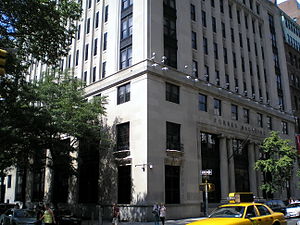 After dabbling in politics, including service in the New Jersey Senate from 1951 to 1957 and candidacy for Governor of New Jersey,[5] he committed to the magazine full-time by 1957, three years after his father's death. After the death of his brother Bruce Charles Forbes in 1964, he acquired sole control of the company.

The magazine grew steadily under his leadership, and he diversified into real estate sales and other ventures. One of his last projects was the magazine Egg, which chronicled New York's nightlife. (The title had nothing to do with Forbes's famous Fabergé egg collection.)

Malcolm Forbes had a lavish lifestyle, exemplified by his private Capitalist Tool Boeing 727 trijet, ever larger Highlander yachts, huge art collection, substantial collection of Harley-Davidson motorbikes, his French Chateau (near Bayeux, Normandy, in Balleroy), his collections of special shape hot air balloons and historical documents, as well as his opulent birthday parties. Additionally in the mid-1960s he was a fixture at NYC's famous Cat Club on Wednesday nights, supporting local musical talents.

He chose the Palais Mendoub (which he had acquired from the Moroccan government in 1970) in the northwestern city of Tangier, Morocco, to host his 70th birthday party. Spending an estimated $2.5 million, he chartered a Boeing 747, a DC-8 and a Concorde to fly in eight hundred of the world's rich and famous from New York and London. The guests included his friend Elizabeth Taylor (who acted as a co-host), Gianni Agnelli, Robert Maxwell, Barbara Walters, Henry Kissinger, half a dozen US state governors, and the CEOs of scores of multinational corporations likely to advertise in his magazine. The party entertainment was on a grand scale, including 600 drummers, acrobats and dancers and a fantasia – a cavalry charge which ends with the firing of muskets into the air – by 300 Berber horsemen.

Forbes became a motorcyclist late in life. He founded and rode with a motorcycle club called the Capitalist Tools. His estate in New Jersey was a regular meeting place for tours that he organized for fellow New Jersey and New York motorcyclists. He had a stable of motorcycles but was partial to Harley-Davidson machines. He was known for his gift of Purple Passion, a Harley-Davidson, to actress Elizabeth Taylor. He was also instrumental in getting legislation passed to allow motorcycles on the cars-only Garden State Parkway in New Jersey. He was inducted to the Motorcycle Hall of Fame in 1999.[2] In 2008, he was inducted into the New Jersey Hall of Fame.[6]

Forbes died in 1990 of a heart attack, at his home in Far Hills, New Jersey.[5] In March 1990, soon after his death, OutWeek magazine published a story with the cover headline "The Secret Gay Life of Malcolm Forbes," by Michelangelo Signorile, which outed Forbes as a gay man.[7] Signorile was critical of the media for helping Forbes publicize many aspects of his life while keeping his homosexuality a secret. The writer asked, "Is our society so overwhelmingly repressive that even individuals as all-powerful as the late Malcolm Forbes feel they absolutely cannot come out of the closet?"[8] Even in death, the media was reluctant to disclose his sexuality; the New York Times would refer only to him as a "famous, deceased millionaire"[7] while reporting on the controversy. Since Malcolm Forbes' death, the magazine business is run by his son Steve Forbes and granddaughter Moira Forbes.