The daughter of Francis W. Wilson (c.1788–1858), a clerk, and his wife, Margaret Oliphant (c.1789–1854), she was born at Wallyford, near Musselburgh, East Lothian, and spent her childhood at Lasswade (near Dalkeith), Glasgow and Liverpool. As a girl, she constantly experimented with writing. In 1849 she had her first novel published: Passages in the Life of Mrs. Margaret Maitland. This dealt with the Scottish Free Church movement, with which Mr. and Mrs. Wilson both sympathised, and met with some success. It was followed by Caleb Field in 1851, the year in which she met the publisher William Blackwood in Edinburgh and was invited to contribute to the famous Blackwood's Magazine. The connection was to last for her whole lifetime, during which she contributed well over 100 articles, including, a critique of the character of Arthur Dimmesdale in Nathaniel Hawthorne's The Scarlet Letter.

In May 1852, she married her cousin, Frank Wilson Oliphant, at Birkenhead, and settled at Harrington Square in London. An artist working mainly in stained glass, her husband had delicate health, and three of their six children died in infancy,[2] while the father himself developed alarming symptoms of consumption. For the sake of his health they moved in January 1859 to Florence, and then to Rome, where Frank Oliphant died. His wife, left almost entirely without resources, returned to England and took up the burden of supporting her three remaining children by her own literary activity. 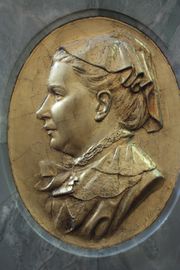 She had now become a popular writer, and worked with amazing industry to sustain her position. Unfortunately, her home life was full of sorrow and disappointment. In January 1864 her only remaining daughter Maggie died in Rome, and was buried in her father's grave. Her brother, who had emigrated to Canada, was shortly afterwards involved in financial ruin, and Mrs. Oliphant offered a home to him and his children, and added their support to her already heavy responsibilities.

In 1866 she settled at Windsor to be near her sons who were being educated at Eton. That year, her second cousin, Annie Louisa Walker, came to live with her as a companion-housekeeper.[3] This was her home for the rest of her life, and for more than thirty years she pursued a varied literary career with courage scarcely broken by a series of the gravest troubles. The ambitions she cherished for her sons were unfulfilled. Cyril Francis, the elder, died in 1890, leaving a Life of Alfred de Musset, incorporated in his mother's Foreign Classics for English Readers, The younger, Francis (whom she called "Cecco"), collaborated with her in the Victorian Age of English Literature and won a position at the British Museum, but was rejected by Sir Andrew Clark, a famous physician. Cecco died in 1894. With the last of her children lost to her, she had but little further interest in life. Her health steadily declined, and she died at Wimbledon, London, on 25 June 1897.[4]

In the 1880s she was the literary mentor of the Irish novelist Emily Lawless. During this time Oliphant wrote several works of supernatural fiction, including the long ghost story A Beleaguered City (1880) and several short tales, including "The Open Door" and "Old Lady Mary".[5]

Oliphant, during an often difficult life, wrote more than 120 works, including novels, books of travel and description, histories, and volumes of literary criticism.

Her biographies of Edward Irving (1862) and her cousin Laurence Oliphant (1892), together with her life of Sheridan in the English Men of Letters series (1883), show vivacity and a sympathetic touch. She also wrote biographies of Francis of Assisi (1871) and Scottish theologian John Tulloch.

At the time of her death, Oliphant was still working on Annals of a Publishing House, a record of the progress and achievement of the firm of Blackwood, with which she had been so long connected. Her Autobiography and Letters, which present a touching picture of her domestic anxieties, appeared in 1899. Only parts were written with a wider audience in mind: she had originally intended the Autobiography for her son, but he died before she had finished it.[6]

M. R. James admired Oliphant's supernatural fiction, and stated that "the religious ghost story, as it may be called, was never done better than by Mrs. Oliphant in "The Open Door" and A Beleaguered City".[7] Mary Butts lauded Oliphant's ghost story "The Library Window", describing it as "one masterpiece of sober loveliness".[8]

Interest in Mrs. Oliphant's work declined in the 20th century. In the mid-1980s, a small-scale revival was led by the publishers Alan Sutton[9] and Virago Press, centred on the Carlingford series and some similarities of subject-matter with the work of Anthony Trollope.[10]

Penguin Books in 1999 published an edition of Miss Marjoribanks (1866).[11] Hester (1873) was reissued in 2003 by Oxford World's Classics.[12] In 2007–2009, the Gloucester publisher Dodo Press reprinted half a dozen of Oliphant's works. In 2010, both the British Library and Persephone Books reissued The Mystery of Mrs. Blencarrow (1890), in the latter case with the novella Queen Eleanor and Fair Rosamund (1886),[13] and the Association for Scottish Literary Studies produced a new edition of the novel Kirsteen (1890).[14]

Russell Hoban also alludes to Oliphant's fiction in his 2003 novel Her Name Was Lola.[16]