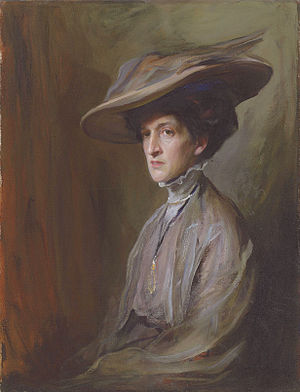 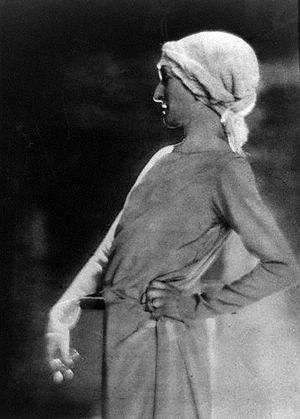 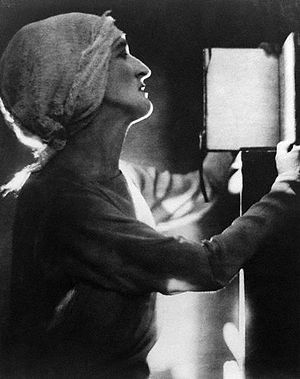 Emma Alice Margaret Asquith, Countess of Oxford and Asquith (née Tennant; 2 February 1864 – 28 July 1945), known as Margot Asquith, was an Anglo-Scottish socialite, author and wit. She was married to H. H. Asquith, a Prime Minister of the United Kingdom, from 1894 until his death in 1928.

She was born in Peeblesshire (Tweeddale), of Scottish and English descent. She was the sixth daughter and eleventh child of Charles Clow Tennant, industrialist and politician, and Emma Winsloe. She was brought up at Glen, the family's country estate; Margot and her sister Laura grew up wild and uninhibited. Margot was a "venturesome child", for example roaming the moors, climbing to the top of the roof by moonlight, riding her horse up the front steps of the estate house. Riding and golf were her lifelong passions.

The two girls were inseparable, entering society together in London in 1881. She and Laura became the central female figures of an aristocratic group of intellectuals called "The Souls" ("You are always talking about your souls," complained Lord Charles Beresford, thereby providing them with a suitable label). When Laura married Alfred Lyttelton in 1885, the first part of Margot's life ended. Laura's death in 1888 was a devastating blow from which Margot never fully recovered. As a result, Margot developed chronic insomnia which would plague her for the rest of her life.

On 10 May 1894, Margot married H. H. Asquith and became a "spur to his ambition". She brought him into the glittering social world which he had in no way experienced with his first wife, of whom it must be said she always spoke warmly. She also became the unenthusiastic stepmother of five children who were bemused by this creature, so different from their quiet mother. "She flashed into our lives like some dazzling bird of paradise, filling us with amazement, amusement, excitement, sometimes with a vague uneasiness as to what she might do next," wrote Violet Asquith. In 1908 when Asquith became Prime Minister, of the first brood of his children only Violet was still at home, and the two shared a deep interest in politics. In contrast, relations between stepmother and stepdaughter were frequently strained, prompting Asquith to write lamentingly of how the two were 'on terms of chronic misunderstanding.'[1] It came as something of a relief to Margot when Violet married Maurice Bonham Carter, Asquith's Principal Private Secretary, in 1915. Violet in later life mellowed somewhat in her attitude to Margot, saying that she was grateful to her for her absolute devotion to Asquith.

A huge house in Cavendish Square in London with a staff of 14 servants was the Asquith home until they moved to 10 Downing Street. The residence of most importance in the life of the Asquiths was The Wharf in Sutton Courtenay, Oxfordshire, built in 1912. This became their weekend home away from home. It is here that literary, artistic and political luminaries would gather.

Asquith bore five children, only two of whom survived infancy: Elizabeth in 1897, who married Prince Antoine Bibesco of Romania in 1919 and became a writer of some note, and Anthony in 1902, who became a leading English film director.

During World War I Asquith's outspokenness led to a public outcry. For example, she visited a German prisoner of war camp, and she accused her shell-shocked stepson Herbert of being drunk. The negative public and media response may well have contributed to the political downfall of her husband. In 1918 she was publicly attacked in court by Noel Pemberton Billing, a right-wing MP who was convinced that the nation's war effort was being undermined by homosexuality in high society. He hinted that she was associated with the conspirators.[2] Billing also published a poem written by Lord Alfred Douglas which referred to "merry Margot, bound With Lesbian fillets".[3]

In 1920 the mansion in Cavendish Square was sold and after her husband's death in 1928, Asquith slowly moved down the residential rungs to 44 Bedford Square, a beautiful house formerly occupied by saloniere Ottoline Morrell, before residing in rooms at the Savoy Hotel. Her final home was in Thurloe Place, Kensington.

She told Harold Nicolson that Neville Chamberlain was "the greatest Englishman that ever lived" for signing the Munich Agreement.[4]

After her husband's death, she was left in near penury and, though she made some money as a writer of numerous autobiographies, her financial position caused her constant concern. Her final overwhelming sadness was the separation from her daughter, Elizabeth, who had been trapped in Bucharest since 1940. Margot schemed for her rescue but Elizabeth died of pneumonia in April 1945; heart-broken, she outlived her daughter by only a few months.

Her writing style was not always critically accepted—the most famous review of Asquith's work came from New York wit Dorothy Parker, who wrote, "The affair between Margot Asquith and Margot Asquith will live as one of the prettiest love stories in all literature."[5] Asquith was known for her outspokenness and acerbic wit. A possibly apocryphal but typical story has her meeting the American film actress Jean Harlow and correcting Harlow's mispronunciation of her first name – "No, no; the 't' is silent, as in 'Harlow'."[6] The story was recorded by the Liberal MP Robert Bernays in his diary entry for 26 June 1934, but Bernays does not claim to have witnessed the alleged encounter himself.[7]