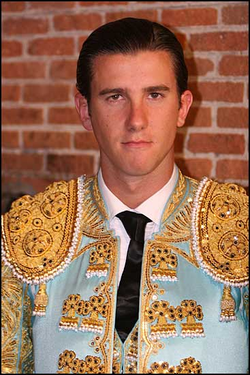 Matador Israel Lancho before a bullfight during the 2005 Aste Nagusia festival in Bilbao, Spain 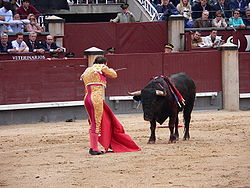 A torero (Spanish: [toˈɾeɾo]) or toureiro (Portuguese: [toˈɾɐjɾu]) (both from Latin taurarius, bullfighter), is a bullfighter and the main performer in the sport of bullfighting as practised in Spain, Portugal, Mexico, Peru, France and other countries influenced by Spanish culture.[1] In Spanish, the word torero describes any of the performers who participate in the bullfight. The main performer, who is the leader of an entourage and the one who kills the bull, is addressed as maestro (master), and his formal title is matador de toros (killer of bulls). The term torero encompasses all who fight the bull in the ring (picadores and rejoneadores). The other bullfighters in the entourage are called subalternos and their suits are embroidered in silver as opposed to the matador's more-theatrical gold.

In English, the torero is sometimes called the toreador. The term does not exist in Spanish; it was invented by Georges Bizet for his opera Carmen. He needed the syllables of the word to match the timing of the song.

A very small number of women have been bullfighters on foot or on horseback; one recent example is Cristina Sánchez. Female matadors have experienced considerable resistance and public hostility from aficionados and other matadors, perhaps being seen as a less physically nimble gender than the established norm.

Usually, toreros start fighting younger bulls (novillos or, more informally in some Latin American countries, vaquillas), and are called novilleros. Fighting of mature bulls commences only after a special match, called "the Alternative". At this same bullfight, the novillero (junior bullfighter) is presented to the crowd as a matador de toros.

The act of bullfighting is not called or considered a stand-alone sport but rather a performance art. There is no contest, simple punctuation, nor any formal classification.

Further still, bullfighting, historically, started more with nobles upon horseback, all lancing bulls with accompanying commoners on foot doing helper jobs. As time went by, the work of the commoners on foot gained in importance up to the point whereupon they became the main and only act. Bullfighting on horseback became a separate and distinct act called "rejoneo" which is still performed today--although, not as often as bullfighting itself does on foot.

Bullfighting on foot became a means for poor, able-bodied men to achieve fame and fortune, similar to the role of boxing in the United States. When a famous torero was asked why he risked his life, one man reportedly answered Más cornadas da el hambre ("Hunger strikes more painfully", lit. "Hunger gives more gores"). Today, it is now common for a bullfighter to be born into a family of bullfighters.

The established term, Maletilla or espontáneo, is attributed to those who illegally jump into the ring and attempt to bullfight for their sake and glory. While the practice itself is widely despised by many spectators and fans alike, some, such as El Cordobés, started their very careers this way. 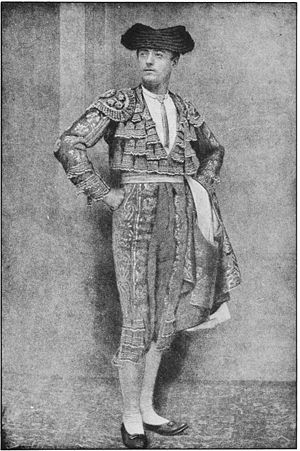 A matador de toros (lit. "killer of bulls", from Latin mactator, killer, slayer, from mactare, to slay) is considered to be both an artist and an athlete, possessing great agility, grace, and co-ordination. One of the most famous matadors was Juan Belmonte (1892–1962), whose technique in the ring revolutionized bullfighting and remains an established standard by which a great deal of bullfighters are judged. The style and bravery of the matador is regarded as being, at least, equally important as to whether or not he actually kills the bull. The most successful matadores used to be treated like pop stars, with matching financial incomes, cult followings and accompanied by lurid tabloid stories about their romantic conquests with women.

Currently, however, even today's top matadors earn less, in real terms, than their peers did in the 1960s--and much of mass media coverage is only limited to a handful of matadors known as the "mediáticos", the sum of which do not necessarily include any of the nation's prized bullfighters in Spain.

The great personal danger of bullfighting adds to the performing matador's mystique; matadores are regularly injured by bulls and, concurrently, 533 professional bullfighters have been killed in the arena since 1700.[2] One of the most famous bullfighters in history, Manolete, died this way in 1947. This hazard is said to be central to the nature and appeal of bullfighting.

The American writer Ernest Hemingway was a bullfighting aficionado. Within his fictional works, The Sun Also Rises features a matador and scenes of bullfighting, as do his short stories The Capital of the World and The Undefeated. Outside of fiction, he also wrote at length on the subject in Death in the Afternoon (1932) and The Dangerous Summer (1959).

In 1962, Hollywood producer David Wolper produced "The Story Of A Matador", documenting what it's like to be a matador.[3] In this case, it was the late Matador Jaime Bravo. 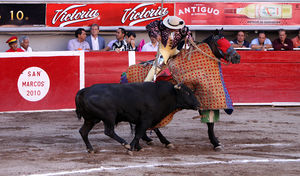 A picador is a bullfighter who uses a special lance called pica while on horseback to test the bull's strength and to provide clues to the matador on which side the bull is favoring. They perform in the tercio de varas which is the first of the three stages in a Spanish bullfight. The shape of the lance or pica is regulated by Spanish law to prevent serious injury to the bull which was viewed as unfair cheating in the past. The bull will charge the horses in the ring and, at the moments prior to contact, the picador lances the bull in a large muscle at the back of the neck; thus begins the work of lowering his head. The picador continues to stab at the bull's neck leading to the animal's first major loss of blood. During this time, the bull's injured nape will fatigue--however, as a result of the enraged bull charging, the picador's horse will tussle with avoiding the bull throes at trying to lift the horse with its horns. The enduring loss of blood and exertion gradually weakens the bull further and makes it ready for the next stage.

In order to protect the horse from the bull's horns, the horse is surrounded by a 'peto' – a mattress-like protection. Prior to 1928, horses did not wear any protection and a bull would frequently disembowel the opposing horse during this vulnerable stage.

French matadors will often use the battle cries "ole" (in France) "allons" as means to antagonize and aggravate the bull. Such a battle cry is said to instill in the chosen bull such a feverish sense of anxiety that the spectacle will become much more fiercely contested. 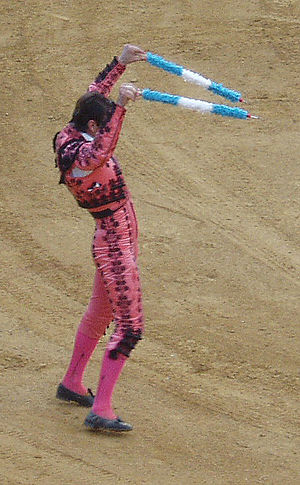 The banderillero is a torero who plants the banderillas (lit. little flags). These are colorful sticks, usually colored with the flag of the banderillero's birthplace, with a barbed point which are increasingly placed in the top of the bull's shoulder. Banderilleros attempt to place the sticks while running as close to the bull as possible. They are judged by the crowd on their form and bravery. Sometimes a matador, who was a particularly skillful banderillero before becoming a matador, will place some of the banderillas himself. Skilled banderilleros can actually correct faults in the manner in which the bull charges by lancing the bull in such a way that the bull ceases hooking to one side, and thereby removing a potential source of danger to the matador by limiting the bull's offensive movements.

Because of the decorations and elaborateness of the costume, the Spanish call the toreador's outfit as traje de luces, meaning the "suit of lights". Though undoubtedly flamboyant, matador costume structure provides great ease of movement.

The codename "Operation Matador" was used no less than six times by various armies and intelligence agencies.[4][5][6]

Currently the professional wrestlers Primo & Epico use the bullfighter gimmick in the current run in the WWE as Los Matadores.

The Street Fighter video game character Vega's costume designed is based on a traje de luces, he is sometimes given a backstory as a former or current bullfighter.