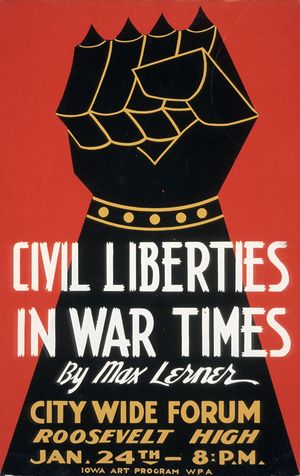 Poster for a lecture by Max Lerner in Des Moines, Iowa, 1940

Max Lerner (1902–1992) was a Russian-born American journalist and educator known for his controversial syndicated column.

Maxwell Alan Lerner was born on December 20, 1902 in Minsk, in the Russian Empire, the son of Bessie (Podel) and Benjamin Lerner. His Russian-Jewish family emigrated to the U.S. in 1907, where his father sold milk door to door.[1] Lerner earned a B.A. from Yale University in 1923. He studied law there, but transferred to Washington University in St. Louis for an M.A. in 1925. He earned a doctorate from the Brookings Institution in 1927.[citation needed]

His column for the New York Post debuted in 1949. It earned him a place on the master list of Nixon political opponents. During most of his career he was considered a liberal. In his later years, however, he was seen as something of a conservative since he expressed support for Margaret Thatcher and the Reagan administration.[2]

He taught at Sarah Lawrence College, Harvard University, Williams College, United States International University, the University of Notre Dame, and Brandeis University. Lerner was also a close friend of film star Elizabeth Taylor during her marriage to Eddie Fisher.[3] He is referenced in the lyrics to the Phil Ochs song, "Love Me, I'm a Liberal": "You know, I've memorized Lerner and Golden".

Lerner was a strong advocate of the New Deal.[2]

Lerner was a staunch opponent of discrimination against African Americans but supported the wartime Japanese American internment and backed an American Civil Liberties Union resolution on the issue to "subordinate civil liberties to wartime considerations and political loyalties."[4]

Lerner's most influential book was America as a Civilization: Life and Thought in the United States Today (1957).[4]

His book, The Unfinished Country, is a collection of more than 200 of his daily columns, which were written for the New York Post over the span of more than a decade. The Unfinished Country contains one of his better-known quotes: "The turning point in the process of growing up is when you discover the core of strength within you that survives all hurt." His 1990 book, Wrestling with the Angel, was about his long struggle with illness.[1]