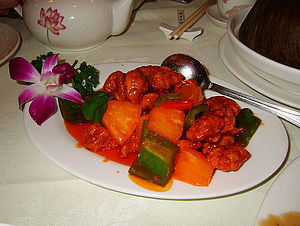 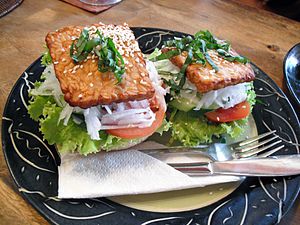 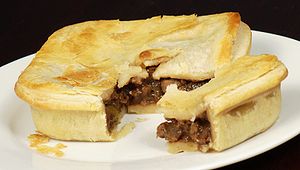 Generally, meat analogue is understood to mean a food made from non-meats, sometimes without other animal products, such as dairy. The market for meat imitations includes vegetarians, vegans, non-vegetarians seeking to reduce their meat consumption for health or ethical reasons, and people following religious dietary laws in Judaism, Islam, Hinduism, and Buddhism.

Tofu, a popular meat analogue, was invented in the Han dynasty.[1] A document written by Tao Gu (903–970) describes how tofu was called "small mutton" and valued as an imitation meat. Meat analogues such as tofu and wheat gluten are associated with Buddhist cuisine in China and other parts of East Asia.[2] In Medieval Europe, meat analogues were popular during Lent, when the consumption of meat from warm-blooded animals is forbidden.[3]

Meat analogue may also refer to a meat-based and/or less-expensive alternative to a particular meat product, such as surimi.

Tofu, a popular meat analogue, was invented in China by the Han dynasty (206 BC–220 AD). Drawings of tofu production have been discovered in a Han dynasty tomb.[1][4] Its use as a meat analogue is recorded in a document written by Tao Gu (903–970). Tao describes how tofu was popularly known as "small mutton" (xiao zaiyang), which shows that the Chinese valued tofu as an imitation meat. Tofu was widely consumed during the Tang dynasty (618–907), and likely spread to Japan during the later Tang or early Song dynasty.[1]

Prior to the arrival of Buddhism, China was predominantly a meat consuming culture. The vegetarian dietary laws of Buddhism led to development of meat analogues as a replacement for the meat-based dishes that the Chinese were no longer able to consume as Buddhists. Meat analogues such as tofu and wheat gluten are still associated with Buddhist cuisine in China and other parts of East Asia.[2] Meat analogues were also popular in Medieval Europe during Lent, which prohibited the consumption of warm-blooded animals, eggs, and dairy products. Chopped almonds and grapes were used as a substitute for mincemeat. Diced bread was made into imitation cracklings and greaves.[3] 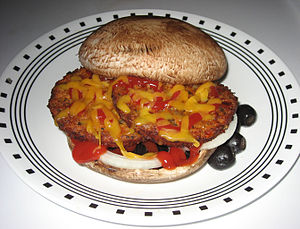 Some vegetarian meat analogues are based on centuries-old recipes for seitan (wheat gluten), rice, mushrooms, legumes, tempeh, yam flour or pressed-tofu, with flavoring added to make the finished product taste like chicken, beef, lamb, ham, sausage, seafood, etc. Yuba and textured vegetable protein (TVP) are other soy-based meat analogues. The first is made by layering the thin skin which forms on top of boiled soy milk.[5] the second is a dry bulk commodity derived from soy and soy protein concentrate.

Some meat analogues include mycoprotein-based Quorn (which usually uses egg white as a binder; only Vegan Burger is suitable for vegans), and modified defatted peanut flour and Valess (which is a sort of cheese, made from cow milk and seaweed).

Dairy analogues may be composed of processed rice, soy (tofu, soymilk, soy protein isolate), almond, cashew, gluten (such as with the first non-dairy creamers), nutritional yeast, or a combination of these, as well as flavoring to make it taste like milk, cheeses, yogurt, mayonnaise, ice cream, cream cheese, sour cream, whipped cream, buttermilk, rarebit or butter. Many dairy analogues contain casein, which is extracted dried milk proteins, making them unsuitable for vegans.

Biologists have long researched methods for growing muscle tissue in laboratory conditions. Advocacy group PETA offered a $1 million prize to the first company that could bring lab-grown chicken meat to consumers by 2012.[6]

Surimi, a processed hash of fish plus flavorings, is used to make products such as imitation crab meat. In some regions,[where?] "surimi" refers only to products made from fish.

Examples of surimi include: