From Infogalactic: the planetary knowledge core
(Redirected from Melians)
Jump to: navigation, search

The Melian Dialogue is a dramatic set-piece debate inserted by the ancient Greek historian Thucydides in his History of the Peloponnesian War concerning the invasion of the island of Melos by Athens in 416 BC. It dramatizes the negotiations between the emissaries of the Athenian invaders and the rulers of Melos. The Athenians demanded that Melos submit and pay tribute or be destroyed. The Athenians appealed to the Melians' sense of pragmatism, citing the overwhelming odds, whereas the Melians appealed to the Athenians' sense of decency and fear of the gods. Neither side was able to sway the other and the negotiations failed. The Athenians subsequently conquered Melos and mercilessly slaughtered or enslaved its inhabitants.

The Melian Dialogue is frequently cited by political scientists and diplomats as a classic case study in political realism. 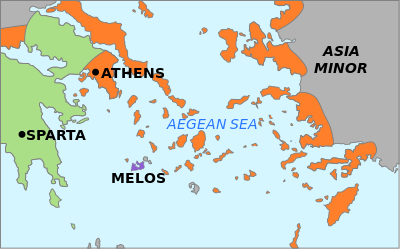 The people of Melos were Dorians and kin to the Spartans, but were independent of any of the mainland empires. For years, the Athenians had desired to incorporate Melos into their empire for its wealth and strategic location in the Aegean Sea. In 431 BC, Athens and Sparta and their respective allies went to war. In 427 BC, some Melians may have made donations to the Spartan war effort, but otherwise the island remained neutral in the war. In 426 BC, the Athenians sent a small force to ravage the Melian countryside. In 425 BC, the Athenians formally demanded a tribute of fifteen talents (equivalent of 6,000 drachmae), but Melos refused to pay.[1]

In the summer of 416 BC, during a truce with Sparta, Athens sent a fleet of 38 ships carrying an army of 3,000 men, led by the generals Cleomedes and Tisias, to conquer the island. After setting up camp on the island, the Athenians sent emissaries who met in private with the rulers of Melos. The emissaries demanded that Melos join the Athenian-dominated Delian League and pay tribute to Athens or face destruction. The Melians rejected the ultimatum. The Athenians laid siege to the city and withdrew most of their troops from the island to fight elsewhere. For months the Melians withstood the siege, but with reinforcements from Athens and the help of traitors within Melos, the Athenians took the city that winter. The Athenians executed all the adult men they caught and sold the women and children into slavery. They then settled 500 of their own colonists on the island.[2]

In 405 BC, with Athens losing the war, the Spartan general Lysander expelled the Athenian settlers from Melos and restored the survivors of the original Dorian colony to the island.[1]

The Athenians offer the Melians an ultimatum: surrender and pay tribute to Athens, or be destroyed. The Athenians do not wish to argue over the morality of the situation, because in practice might makes right (or, in their own words, "the strong do what they can and the weak suffer what they must"[3]).

The Melians argue that they are a neutral city and not an enemy, so Athens has no need to conquer them. The Athenians counter that if they accept Melos' neutrality and independence, they would look weak: people would think they spared Melos because they were not strong enough to conquer it.

The Melians argue that an invasion will alarm the other neutral Greek states, who will become hostile to Athens for fear of being invaded themselves. The Athenians counter that the Greek states on the mainland are unlikely to act this way. It is the independent island states and the disgruntled subjects that Athens has already conquered that are more likely to take up arms against Athens.

The Melians argue that it would be shameful and cowardly of them to submit without a fight. The Athenians counter that the stakes are too high for the Melians to worry about shame.

The Melians argue that though the Athenians are far stronger, there is still a chance they could win. The Athenians counter that hope is an irrational emotion when one faces poor chances of victory and utter ruin in defeat.

The Melians believe that they will have the assistance of the gods because their position is morally just. The Athenians counter that the gods will not intervene because it is the natural order of things for the strong to dominate the weak.

The Melians argue that their Spartan kin will come to their defense. The Athenians counter that the Spartans are a practical people who never put themselves at risk when their interests are not at stake, and rescuing Melos would be particularly risky since Athens has the stronger navy.

The Athenians express their shock at the Melians' lack of realism. They say that there is no shame in submitting to a stronger enemy, especially one who is offering reasonable terms. The Melians do not change their minds and politely dismiss the envoys.