Meredith Miles Marmaduke was born in Westmoreland County, Virginia, on August 28, 1791 to Vincent and Sarah (Porter) Marmaduke.[1] He was educated in the public schools and was employed as a civil engineer until his career was interrupted by the War of 1812. During the war, despite being just twenty-two years of age, Marmaduke was commissioned as colonel of the regiment that was raised in his county.[2]

Returning to Virginia after the war, Marmaduke was appointed United States Marshal for the Tidewater district of Virginia by President James Madison.[3] He served for several years in that office until being elected clerk of the circuit court. In 1823 Meredith Marmaduke immigrated to Franklin, Missouri for his health.[1] Marmaduke held a variety of jobs, including store clerking, managing a large farm, and working as a trader on the Santa Fe Trail.[4] In 1826 Marmaduke married Lavinia Sappington, the daughter of Dr. John Sappington, a prominent pioneer physician of Saline County famous for his use of quinine to treat malaria fevers.[1][4] For a brief time Marmaduke became a partner in his father-in-law's enterprises, including a store in Arrow Rock, Missouri, a town he had platted in 1829 while surveyor for Saline County. Around 1835 Marmaduke became a successful farmer on land not far from Arrow Rock where he and his wife raised their ten children.[3]

A Jacksonian Democrat as well as a friend and supporter of Missouri Senator Thomas Hart Benton, Meredith Marmaduke served as Saline County surveyor and county judge before being elected Lieutenant Governor of Missouri in 1840.[2] His time in that role was relatively uneventful until the morning of February 9, 1844. It was on that day Governor Thomas Reynolds committed suicide. Assuming office in largely a caretaker for the final ten months remaining in the Governors term, nonetheless Marmaduke set the stage for major changes in the treatment of the mentally ill. In one of his final messages to the state legislature he strongly urged them to establish, in the vernacular of the time, a lunatic asylum for the housing and treatment of those with mental illness.[4] One of his other acts as Governor likely cost him a chance to win election to the office in his own right. Marmaduke, himself a slaveholder, refused to pardon three abolitionists who had helped escaped slaves. Angered by is refusal, Missouri Democratic Party leaders bypassed Marmaduke as their candidate in the 1844 election and instead chose the eventual winner, John C. Edwards.[1]

Though out of office, Marmaduke kept his hand in state affairs the next year, serving as Saline County delegate to the Missouri Constitutional Convention. He would make an unsuccessful bid for Governor again in 1848. In 1854, became president of the State Agricultural Society and of the district fair association, originator the first State Fair in Missouri.[5] 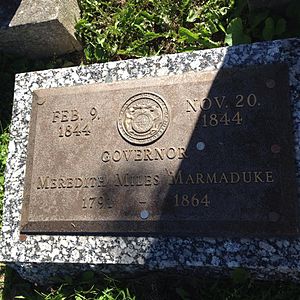 Even before the first shots were fired at Fort Sumter Meredith Marmaduke found himself at odds with friends and family. Much like his friend Senator Benton, Marmaduke's views on slavery had begun to change in the late 1840s.[4] This led to a business and personal estrangement between Marmaduke and his father-in-law Dr. Sappington, and brother-in-law, future Missouri Governor Claiborne Fox Jackson. Once the war began Marmaduke was a fierce Union supporter. Going against his wishes, four of Marmaduke's sons would fight for the South, with two of them dying in the cause.[1] One son, Confederate General John Sappington Marmaduke would survive the war and later become Missouri's 25th governor (1885–1887). Another, Henry Hungerford Marmaduke, served as a gunner in the Confederate Navy aboard the ironclad CSS Virginia in its historic clash with USS Monitor. Meredith Marmaduke himself would not live to see the end of the Civil War. He died at his home on March 26, 1864 and was buried at Sappington Cemetery State Historic Site near Arrow Rock, Missouri.[2][3]