A mezuzah (Hebrew: מְזוּזָה‎ "doorpost"; plural: מְזוּזוֹת mezuzot) is a piece of parchment (often contained in a decorative case) inscribed with specified Hebrew verses from the Torah (Deuteronomy 6:4-9 and 11:13-21). These verses compose the Jewish prayer "Shema Yisrael", beginning with the phrase: "Hear, O Israel, the LORD (is) our God, the LORD is One". In mainstream, i.e. Rabbinic Judaism, a mezuzah is affixed to the doorframe of Jewish homes to fulfill the mitzvah (Biblical commandment) to inscribe the words of the Shema "on the doorposts of your house" (Deuteronomy 6:9). Some interpret Jewish law to require a mezuzah on every doorway in the home[1] apart from bathrooms and closets too small to qualify as rooms.[2] The parchment is prepared by a qualified scribe (a "sofer stam") who has undergone many years of meticulous training, and the verses are written in black indelible ink with a special quill pen. The parchment is then rolled up and placed inside the case.

This article deals mainly with the mezuzah as it is used in Rabbinic Judaism. Karaite Judaism and Samaritanism have their own distinct traditions, which are dealt with only in this paragraph.

In Karaite Judaism the deuteronomic verse "And you shall write them on the doorposts of your houses and your gates" (Deuteronomy 5:9; 11:20) is interpreted to be a metaphor and not as referring to the Rabbanite mezuzah.[3] Thus Karaites do not traditionally use mezuzot, but put up a little plaque in the shape of the two Tables of the Law with the Ten Commandments. In Israel, where they might try not to make other Jews feel uncomfortable, many Karaites make an exception and place a mezuzah on their doorpost as well.[4][5][6] The Karaite version of the mezuzah is fixed to the doorways of public buildings and sometimes to private buildings, too.[6]

The Samaritans interpret the deuteronomic commandment to mean displaying any select text from the Samaritan version of the five Books of Moses.[7]This can contain a blessing or a particularly holy or uplifting message.[8] In the past they placed a stone plaque inscribed with the Ten Commandments above the house door, some examples dating back to the Byzantine (4th-7th century) and Early Muslim (7th-11th century) periods being now shown in the Israel Museum in Jerusalem.[9][6][10][11] Nowadays a Samaritan mezuzah is usually made of either marble, a wooden plate, or a sheet of parchment or high quality paper, on which they inscribe select verses from the Samaritan Torah. This they place either above the house door, or inside the house, in the entrance hall or at a prominent place on a large wall.[8][12][7] These mezuzot are found in every Samaritan household as well as in the synagogue.[12] Today some Samaritans would also use a Jewish-style mezuzah case and place inside it a small written Samaritan scroll,[7] i.e. a text from the Samaritan Torah, written in the Samaritan alphabet. The more such mezuzot there are in the house, the better it is considered to be.[8]

According to halakha, the mezuzah should be placed on the right side of the door or doorpost, in the upper third of the doorpost (i.e., approximately shoulder height),[13] within approximately 3 inches (8 cm) of the doorway opening.[citation needed] Care should be taken to not tear or damage the parchment or the wording on it, as this will invalidate the mezuzah, which is considered Torah. Generally, halakha requires that mezuzot be affixed within 30 days of moving into a rented house or apartment. This applies to Jews living in the Diaspora (i.e., outside of the Land of Israel). For a purchased home or apartment in the Diaspora, or a residence in Israel (owned or rented), the mezuzah is affixed immediately upon moving in. The reason for this difference is that there is an assumption that when a Jew lives in Israel, Israel shall remain his/her permanent residence, whereas a home in the diaspora is temporary. Mezuzot are very special objects and must be taken care of carefully and according to Jewish laws and traditions. 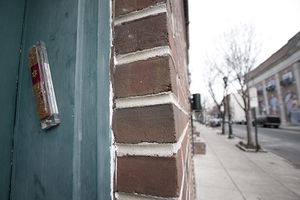 Mezuzah affixed to a door frame on South Street in Philadelphia.

Where the doorway is wide enough, Ashkenazi Jews tilt the mezuzah so that the top slants toward the room into which the door opens. This is done to accommodate the variant opinions of the medieval Rabbis Rashi and of his grandson, Rabbeinu Tam, as to whether it should be placed vertically (Rashi) or horizontally (Rabbeinu Tam),[14] and also to imply that God and the Torah (which the mezuzah symbolizes) are entering the room. The compromise solution has been suggested by Rabbi Jacob ben Asher.[14]

Most Sephardic, Mizrahi and other non-Ashkenazi Jews affix the mezuzah vertically,[15] though Spanish and Portuguese Jews living in countries where the majority of Jews are Ashkenazim usually place it slanting.

The procedure is to hold the mezuzah against the spot upon which it will be affixed, then recite a blessing:

Blessed are You, Lord our God, King of the Universe, Who sanctified us with His mitzvot, and commanded us to affix a mezuzah.

Any Jew can recite the blessing provided he or she is old enough to understand the significance of the mitzvah. After the blessing, the mezuzah is attached. Many people also touch a finger to the mezuzah as a way of showing respect to God in a simpler fashion than saying the prayer whenever they pass through the door.

When affixing several mezuzot, it is sufficient to recite the blessing once, before affixing the first one.

Many observant Jews from all Jewish denominations have a qualified scribe check the mezuzot parchments for defects (such as small tears or faded lettering) at least twice every seven years.[16][17] These men are very important and are generally found among Orthodox Jews. They aren't as common as would be expected as it is not a job that pays extremely well and is often done on the side[citation needed]. These men are known as soferim (singular: sofer). A sofer is needed to make new mezuzot parchments which are in accordance with Jewish Law. 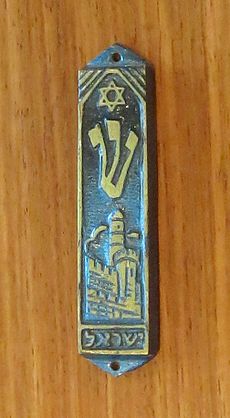 The commandment to affix a mezuzah is widely followed in the Jewish world, even by Jews who are not religiously observant. While the important part of the mezuzah is the klaf, or the parchment, and not the case itself, designing and producing mezuzah cases has been elevated to an art form over the ages. Mezuzah cases are produced from a wide variety of materials, from silver and precious metals, to wood, stone, ceramics, pewter, and even polymer clay. Some dealers of mezuzah cases will provide or offer for sale a copy of the text that has been photocopied onto paper; this is not a Kosher (valid) mezuzah,[18] which must be handwritten onto a piece of parchment by a qualified scribe.

It is very customary to write two inscriptions on the back of the parchment: 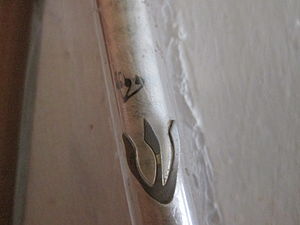 Shaddai, ["Almighty"] one of the biblical names of God, also serves here as an acronym for Shomer Daltot Yisrael, "Guardian of Israel's doors". Many mezuzah cases are also marked with the Hebrew letter ש (Shin), for Shaddai.

"כוזו במוכסז כוזו" is a Caesar cipher — a one letter shift — of the third, fourth, and fifth words of the Shema, "Adonai, Eloheinu, Adonai", "The Lord, our God, the Lord"; it is written on the back of the case, opposite the corresponding words on the front.[19] This inscription dates from the 11th century and is found among the Hasidei Ashkenaz (medieval German Jewish mystics).

According to the Sephardic custom (minhag), the phrase "כוזו במוכסז כוזו" is prohibited, and only the Hebrew word שדי (Shaddai) is to be written on the back of the mezuzah. This practice is supported by the Shulchan Aruch and the writings of the Rambam. The Ashkenazi custom of writing both phrases, however, was supported in the writings of the Remo.Template:Yoreh De'ah 288:15

Legal battles in the U.S.

The Jewish practice of affixing a mezuzah to the entranceway of a residential unit[20] has been rarely challenged in the United States or Canada,[21] and until recently there was no case law precedent on the subject.

In Chicago in 2001, the condominium association at the 378-unit Shoreline Towers adopted a rule banning "mats, boots, shoes, carts or objects of any sort… outside unit entrance doors",[22] which by board vote in 2004 was interpreted to be absolute.[23] Relying on the Association rule, during 2004 Shoreline Towers management removed the hallway mezuzot of condominium tenants, resulting in letters from Jewish groups which unsuccessfully protested the rule. Complaints by Shoreline Towers tenants were subsequently filed with the Chicago Commission on Human Relations, Illinois Attorney General, and U.S. Department of Housing and Urban Development, alleging housing discrimination on the basis of religion[24] and seeking damages. Meanwhile, a newspaper report indicated that Shoreline Towers was not the sole condominium association in Chicago with such a restriction, although one of them soon agreed to modify its rule.[25]

On reading a news report of the mezuzah dispute at Shoreline Towers, Chicago alderman Burton Natarus, like other Jewish observers of the development,[26] was upset by the ban. He drafted an amendment to the city’s Municipal Code which made it illegal for a renter or owner of an apartment, house, or condo to be prohibited from "placing or affixing a religious sign, symbol or relic on the door, door post or entrance."[27] Although there was opposition to such a move,[28] it became law in Chicago that December.[29] The first such legislation in North America, it included a maximum $500 fine for its violation.

Notwithstanding this legislation, court action continued concerning separate complaints against Shoreline Towers for its rule affecting mezuzot. In 2006, a federal court judge determined that the condominium association’s rule did not violate the Federal Fair Housing Act;[30] the district court upheld the opinion on appeal in 2008;[31] in 2009, the U.S. Court of Appeals for the 7th Circuit in Chicago reversed the 2008 decision,[32] and the case proceeded. Meanwhile, during the dispute, records of the Chicago Jewish Star (which had been reporting on the case) were unsuccessfully subpoenaed,[33] and for the first time Illinois’ anti-SLAPP legislation was applied.[34] In 2011, a confidential settlement to the Shoreline Towers disputes was finally achieved.[35]

In 2006, a more narrowly focused amendment to the state’s Condominium Property Act was initiated by Illinois Senator Ira Silverstein, the first such state law.[36]

In 2006, a woman in a 16-story condo building in Fort Lauderdale, Florida, was instructed to remove the mezuzah from her hallway unit and threatened with a fine. After a lengthy legal battle, the condo association was found guilty of discrimination. In 2008, House Bill 995, an amendment to the Florida Condominium Act modeled on the Illinois state legislation, became law.[37]

In Texas in 2007, a couple living in the Madison Park area of Houston was instructed to "remove the item attached to your door frame" to avoid violating association rules.[38] A legal battle ensued, during which a U.S. District Court judge ruled in 2008 on behalf of the condo association. Subsequently the couple turned to Texas House of Representatives member Garnet F. Coleman. His bill to protect such religious displays, as introduced in 2009, was not adopted, but in June 2011 a slightly revised version (HB1278) was signed into law by Texas Governor Rick Perry.[39]