Midrash HaGadol or The Great Midrash (Hebrew: מדרש הגדול) is an anonymous late (14th century) compilation of aggadic midrashim on the Pentateuch taken from the two Talmuds and earlier Midrashim of Yemenite provenance.[1] In addition, it borrows quotations from the Targums, and Maimonides[2] and Kabbalistic writings (Oesterley & Box 1920), and in this aspect is unique among the various midrashic collections. This important work—the largest of the midrashic collections—came to popular attention only relatively recently (late 19th century) through the efforts of Jacob Saphir, Solomon Schecter, and David Zvi Hoffman. In addition to containing midrashic material that is not found elsewhere, such as the Mekhilta of Rabbi Shimon bar Yochai, the Midrash HaGadol contains what are considered to be more correct versions of previously known Talmudic and Midrashic passages.

The existence of the Midrash HaGadol was first brought to the attention of Jewish scholarship by Jacob Sapir, who in his Even Sapir (1866) reports seeing a manuscript of the work in the possession of the Chief Rabbi of Yemen (Fish 1957). His remarks about the "discovery" are reproduced in Fish (1940),[3] where he describes a work on the entire Pentateuch containing "twice as much as our Midrash Rabbah". (It is worth noting that while this collection was new to European Jewry, it was probably well known to the Jews of Yemen.) The first manuscript was brought from Yemen to Jerusalem and then to Berlin in 1878 by a certain Mr. Shapira, and this Midrash subsequently became the subject of much scholarly attention. There are currently approximately two hundred manuscripts of this work residing in various public and private Hebraica collections, according to the catalog of the Institute of Microfilmed Hebrew Manuscripts. 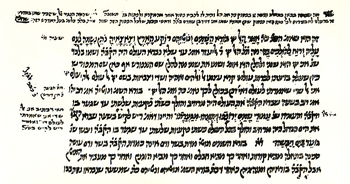 The Midrash HaGadol on Genesis was first published by Solomon Schecter in 1902. A large portion of Midrash HaGadol on Exodus was then published by David Zvi Hoffman in 1913. Midrash HaGadol on Book of Numbers was published by S. Fisch in 1940 in a more accessible style than the previous efforts, which were principally arranged for a scholarly audience. More recent editions listed by Strack & Stemberger (1991) are those on Genesis and Exodus by M. Margulies (1967), on Leviticus by E.N. Rabinowitz (1932) and A. Steinsalz (1975), on Numbers by E.N. Rabinowitz (1973), and on Deuteronomy by S. Fish (1972). The Mossad HaRav Kook Institute in Jerusalem has also published a five-volume edition.

According to Higger (1934), the work dates to the late 14th century. A discussion of its authorship is provided in Fish (1940), wherein he reviews the evidence in favor of the three then-prevailing opinions regarding authorship of the Midrash HaGadol, variously that it is the work of Rambam, his son Abraham ben Rambam, the author according to Maharitz (an opinion disputed in later generations),[4] or David bar Amram al-Adeni.[5] After discounting Rambam as a possible author, and reviewing some compelling factors in favor of the other two possible authors, Fish (1940) offers the conciliatory hypothesis that the work was composed in the Arabic language by Abraham ben Rambam, and translated into Hebrew by David al-Adeni. While Dr. Fish offers possible explanations for how the work—if indeed authored by Abraham ben Rambam in Egypt—came first to be "lost" and then to be rediscovered in Yemen, Strack & Stemberger (1991) find the attribution to Abraham ben Rambam "only extremely weakly attested," and report that modern scholars almost uniformly attribute the work in its entirety to David bar Amram al-Adeni. S. Fish concedes this as well in his Encyclopedia Judaica article on the topic.

The Midrash HaGadol contains material from Mekhilta de-Rabbi Shimon, Sifre Zutta, Mekhilta on Deuteronomy, Mekhilta de-Rabbi Ishmael, Sifre, and other unknown midrashic sources. In addition, the midrash makes use of the work of Rambam and Alfasi, as well as many geonic writings (Strack & Stemberger 1991), but the sources are never cited—a unique characteristic of this midrash (Fisch 1940). All these various sources are fused in such a way that the product is a new literary creation in which the original ingredients can frequently not be unambiguously discriminated.

A "Midrash HaGadol that was brought from Aden" is cited by Joseph Shalit Riqueti in Sefer Chochmat HaMishkan (1676), but it is not known whether this is the same as the work under consideration here.