Michael Joseph "Mike" Mansfield (March 16, 1903 – October 5, 2001) was an American politician and diplomat. A member of the Democratic Party, he served as a U.S. Representative (1943–1953) and a U.S. Senator (1953–1977) from Montana. He was the longest-serving Senate Majority Leader, serving from 1961 to 1977. During his tenure, he shepherded Great Society programs through the Senate and strongly opposed the Vietnam War.

After retiring from the Senate, Mansfield served as U.S. Ambassador to Japan from 1977 to 1988, and upon retiring as ambassador, was awarded the nation's highest civilian honor, the Presidential Medal of Freedom (1989), in part for his role in the resignation of Republican President Richard Nixon.[1] Mansfield is the longest-serving American ambassador to Japan in history.[2]

After his ambassadorship, Mansfield served for a time as a senior adviser on East Asian affairs to Goldman Sachs, the Wall Street investment banking firm.[1]

Mansfield was born in the Brooklyn section of New York City, the son of Patrick J. Mansfield and Josephine (née O'Brien) Mansfield, who were both Irish Catholic immigrants.[3] His mother died from pneumonia in 1906, and his father subsequently sent Michael and his two sisters to live with an aunt and uncle in Great Falls, Montana.[4] He attended local public schools, and worked in his relatives' grocery store.[3] He turned into a habitual runaway, even living at a state orphanage in Twin Bridges for half a year.[5]

At 14, Mansfield dropped out of school and lied about his age in order to enlist in the U.S. Navy during World War I.[6] He went on several overseas convoys on the USS Minneapolis, but was discharged by the Navy after his real age was discovered.[6] (He was the last known veteran of the war to die before reaching the age of 100, as well as being the final World War I veteran to sit in the US Senate.) After his Navy discharge, he enlisted in the U.S. Army, serving as a private from 1919 to 1920.[7]

Mansfield was a Private First Class in the U.S. Marine Corps from 1920 to 1922.[7] He served in the Western Recruiting Division at San Francisco until January 1921, when he was transferred to the Marine Barracks at Puget Sound, Washington. The following month, he was detached to the Guard Company, Marine Barracks, Navy Yard, Mare Island, California. In April, he boarded the USAT Sherman, bound for the Philippines. After a brief stopover at the Marine Barracks at Cavite, he arrived at his duty station on May 5, 1921, the Marine Barracks, Naval Station, Olongapo, Philippine Islands. One year later, Mansfield was assigned to Company A, Marine Battery, Asiatic Fleet. A short tour of duty with the Asiatic Fleet took him along the coast of China, before he returned to Olongapo in late May 1922.[6] His service with the Marines established a lifelong interest in Asia.

That August, Mansfield returned to Cavite in preparation for his return to the United States and eventual discharge. On November 9, 1922, Marine Private Michael J. Mansfield was released on the completion of his enlistment. He was awarded the Good Conduct Medal, his character being described as “excellent” during his two years as a Marine.[citation needed]

Following his return to Montana in 1922, Mansfield worked as a "mucker," shoveling ore and other waste, in the copper mines of Butte for eight years.[7] Having never attended high school, he took entrance examinations to attend the Montana School of Mines (1927–1928), studying to become a mining engineer.[5] He later met a local schoolteacher and his future wife, Maureen Hayes, who encouraged him to further his education. With her financial support, Mansfield studied at the University of Montana in Missoula, where he took both high school and college courses.[4] He was also a member of Alpha Tau Omega fraternity. He earned his Bachelor of Arts degree in 1933, and was offered a graduate assistantship teaching two courses at the university; he also worked part-time in the registrar's office.[3] He earned a Master of Arts degree from the Fletcher School of Law and Diplomacy of Tufts University in 1934 with a thesis entitled: "United States-Korean Diplomatic Relations: 1866-1910".[3] From 1934 to 1942, he taught classes in Far Eastern and Latin American history, and also lectured some years on Greek and Roman history.[5] He also attended the University of California at Los Angeles (1936–1937).[7]

Service in The House of Representatives 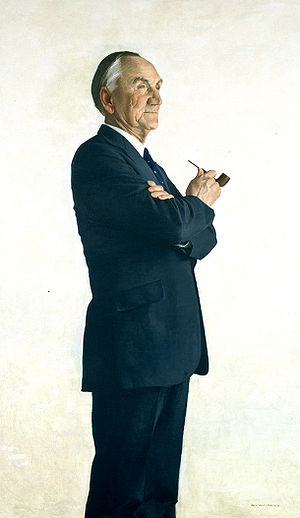 In 1940, Mansfield ran an unsuccessful campaign for the Democratic nomination for the U.S. House of Representatives in Montana's 1st congressional district.[6] However, he ran for the same seat in 1942 and won, handily defeating Republican businessman Howard K. Hazelbaker.[8] He succeeded Jeannette Rankin, the first woman elected to the Congress, who had decided not to seek re-election.

A new-comer to the House, who is reportedly internationalist-minded, having been professor of history and political science at Montana State University for ten years. Though a supporter of the Administration's foreign policy, he is likely to be strongly critical of the smallness of China's share of Lend-Lease, and of what he fears is the Administration's tendency to regard the Atlantic as more important than the Pacific, and of its apparent reluctance to regard the Chinese as an ally on equal footing. His strongly pro-Chinese sentiments may tend to make him somewhat anti-British on this score.

Mansfield served five terms in the House, being re-elected in 1944, 1946, 1948, and 1950. His military service and academic experience landed him a seat on the House Foreign Affairs Committee.[3] He went to China on a special mission for President Franklin D. Roosevelt in 1944, and served as a delegate to the ninth Inter-American Conference in Colombia in 1948.[8] In 1951, he was appointed by President Harry S. Truman as a delegate to the United Nations sixth session in Paris. During his House tenure, he also expressed his support for price controls, a higher minimum wage, the Marshall Plan, and aid to Turkey and Greece; he opposed the House Un-American Activities Committee, the Taft–Hartley Act, and the Twenty-second Amendment.[8]

Service in The Senate

An early supporter of Ngo Dinh Diem, Mansfield had a change of heart on the Vietnam issue after a visit to Vietnam in 1962. He reported to President Kennedy on December 2, 1962, that US money given to Diem's government was being squandered and that the US should avoid further involvement in Vietnam. He was thus the first American official to comment adversely on the war's progress.

Mansfield delivered a eulogy on November 24, 1963, as President Kennedy's casket lay in state in the Capitol rotunda, saying in part, "He gave that we might give of ourselves, that we might give to one another until there would be no room, no room at all, for the bigotry, the hatred, prejudice, and the arrogance which converged in that moment of horror to strike him down."[10]

During the Johnson presidency, Mansfield became a frequent and vocal critic of US involvement in the Vietnam War. In February 1965 he lobbied against escalating aerial bombardment of North Vietnam in the aftermath of Pleiku, arguing in a letter to the president that Operation Rolling Thunder would lead to a need for "vastly strengthened . . . American forces."[11]

In 1964, Mansfield, as Senate Majority Leader, filed a procedural motion to have the proposed Civil Rights Act discussed by the whole Senate rather than by the Judiciary Committee, the latter having killed similar legislation seven years prior.[12]

He hailed the new Nixon administration, especially the "Nixon Doctrine" announced at Guam in 1969 that the US would:

In turn Nixon turned to Mansfield for advice and as his liaison with the Senate on Vietnam. Nixon began a steady withdrawal of U.S. troops shortly after taking office in January 1969, a policy supported by Mansfield. During his first term, Nixon reduced American forces by 95%, leaving only 24,200 in late 1972; the last ones left in March 1973.

During the economic crisis of 1971, Mansfield was not afraid to reach across the aisle to help the economy. He said:

What we're in is not a Republican recession or a Democratic recession; both parties had much to do with bringing us where we are today. But we're facing a national situation which calls for the best which all of us can produce, because we know the results will be something which we will regret.[13]

An earlier Mansfield Amendment, offered in 1971, called for the number of U.S. troops stationed in Europe to be halved. On May 19, 1971, however, the Senate defeated this amendment by a vote of 61–36.

As Senator, Mansfield sponsored S.J.RES.25 : The joint resolution to authorize and request the President to issue a proclamation designating the fourth Sunday in September, 1973, as "National Next Door Neighbor Day", and in 1974 drafted legislation (S.J.RES.235) to honor the fourth Sunday in September of every subsequent year as "Good Neighbor Day".[17]

Mansfield retired from the Senate in 1976, and was appointed Ambassador to Japan in April 1977 by Jimmy Carter, a role he retained during the Reagan administration until 1988. While serving in Japan, Mansfield was highly respected. Mansfield is particularly renowned for describing the United States-Japan relationship as the 'most important bilateral relationship in the world, bar none'.[18] Mansfield's successor in Japan, Michael Armacost, noted in his memoirs that, for Mansfield, the phrase was a 'mantra.' While in office, Mansfield also fostered relations between his home state of Montana and Japan. The sister city of Helena, capital of the state, is Kumamoto city, on the island of Kyushu.[19]

In 1977, Mansfield received the U.S. Senator John Heinz Award for Greatest Public Service by an Elected or Appointed Official, an award given out annually by Jefferson Awards.[22]

Mansfield retired in 1989. In that year he received the Presidential Medal of Freedom. He received the United States Military Academy's Sylvanus Thayer Award. In 1990, Japan conferred on Ambassador Mansfield the Grand Cordon of the Order of the Rising Sun with Paulownia Flowers. This is Japan's highest honor for someone who is not a head of state.[23]

The burial plot of Senator and Mrs. Mansfield can be found in section 2, marker 49-69F of Arlington National Cemetery.