The Milton line is one of the seven train lines of the GO Transit system in the Greater Toronto Area, Ontario, Canada. It extends from Union Station in Toronto to Milton.

Following a promotional opening on Sunday October 26, 1981, regular service began the following Monday.[2] Six trips were operated from 2002-2009 and five before this. From 2009-2011, there were seven inbound and seven outbound train trips daily. An eighth train was added to the morning and afternoon runs in 2011 and a ninth train started on January 5, 2015.[3]

On April 16, 2015, the Ontario government is working with Metrolinx to have more train service along the Milton line, known as GO Regional Express Rail over the next decade. During peak hours, trains would run in peak direction every 15 minutes along this line.[4]

Bus service was expanded into the cities of Cambridge, Kitchener and Waterloo in October 2009. Several bus routes operate between the University of Waterloo, Kitchener Charles Street Transit Terminal, and Cambridge SmartCentre shopping centre to the Square One Bus Terminal in central Mississauga, including a small number of trips connecting with the train service at Milton GO Station.

The Regional Municipality of Waterloo funded a study indicating that a $110 million extension of the Milton line could bring trains to Cambridge by 2012, with possible stations at Guelph Line in Campbellville, Highway 6 in Puslinch, and at Franklin Boulevard (a park-and-ride) and Water Street (downtown with transit connections) in Cambridge.[5] However, the plans didn't come to fruition when an environmental assessment became a victim of budget cuts. Go Transit expects expansion of train service to Cambridge to happen in the 15 to 25 year time frame, after passenger capacity upgrades at Milton to relieve current train overcrowding.[6]

Regional Express Rail (RER) is part of the Province’s ‘Big Move’, a $50-billion public transit expansion adopted in 2008 to reduce traffic congestion in the GTHA. Part of the original plan announced in 2008 was the implementation of two-way, all-day rail service to Milton, slated to be in place within 15 years of the announcement (2023). In the 2012 ‘Big Move Update’, this timeline shifted to a 16-to-25-year planning horizon.[7] As a result of this deferral to a longer-term timeline for the improvements, Milton town councillor Rick DiLorenzo has referred to the Milton line as the "orphan" of Metrolinx.[7] Regional Chair Gary Carr said it feels like the rug was being pulled from underneath them with these sudden changes that affected Halton towns Milton and Georgetown. “If the Big Move projects benefiting Halton are delayed, Halton will not be able to meet provincial growth plan targets. The transportation system mode split and level of service objectives will not be met,” said Tim Dennis, Halton's regional transportation services director.[8]

Making matters worse for Town of Milton residents, the 2012 Big Move update document indicates that RER all-day, two-way service will only extend as far west as Meadowvale station in Mississauga, and will not service Lisgar station in Mississauga, nor Milton's station, service which had been promised by the provincial Liberals Halton candidate during the 2011 election.[9][10][11][12] This change was approved in February 2013.[13]

The discrepancy appears to come between conflicting stated goals between the Big Move (full two-way, all-day service to Milton within 15 years) and GO 2020 (two-way, all-day service only to Meadowvale station in 15 years, and to Milton and Lisgar within 25 years). An objective of The Big Move Update is to align the GO 2020 plan and The Big Move. Reports cited "significant infrastructure and operational challenges that mean it will not be possible to deliver two-way, all-day service all the way to Milton in the 15-year time horizon. Additional tracks and potentially numerous grade separations are necessary are a prerequisite to the expansion of service to Milton. The construction is especially challenging through built-up areas. This rail corridor is largely owned by CPR, a private third party operating freight rail. Their approval is required for any service and infrastructure expansion. Two-way, all-day service can be delivered to Meadowvale in the 15-year timeframe, but the full extension to Milton can only be delivered over the 25-year horizon."[13]

In April 2015, Metrolinx in partnership with the Town of Milton launched a pilot project through an app called Rideco which allows Go riders to book transportation to and from the Milton Go Station. This is due to the Milton station's parking lot being full by the time the second morning train arrives. As North America's fastest growing community for the last decade, the parking lot has increasing been in demand by new residents and those driving in from Cambridge.[15]

The Milton line makes connections with:

In 2015, Metrolinx released a list of potential sites for construction of new GO train stations. For the Milton line, the sites include:[16]

Selection of some station sites would preclude other sites. Only one of The East Mall and The West Mall sites would result in a potential future station, as would only one of the Liberty Village, Queen Street West-Dufferin, and Dundas West sites. The potential site for The East Mall or The West Mall is south of Dundas Street West near its intersection with Highway 427. 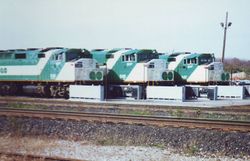 Milton line locomotives at rest in the Campbellville yard. (circa 1990)