Mount Rainier National Park is a United States National Park located in southeast Pierce County and northeast Lewis County in Washington state.[3] It was established on March 2, 1899 as the fifth national park in the United States. The park encompasses 236,381 acres (369.35 sq mi; 956.60 km2)[1] including all of Mount Rainier, a 14,411-foot (4,392 m) stratovolcano.[4] The mountain rises abruptly from the surrounding land with elevations in the park ranging from 1,600 feet to over 14,000 feet (490 - 4,300 m). The highest point in the Cascade Range, around it are valleys, waterfalls, subalpine meadows, old-growth forest and more than 25 glaciers. The volcano is often shrouded in clouds that dump enormous amounts of rain and snow on the peak every year and hide it from the crowds that head to the park on weekends.

Mount Rainier is circled by the Wonderland Trail and is covered by several glaciers and snowfields totaling some 35 square miles (91 km2). Carbon Glacier is the largest glacier by volume in the contiguous United States, while Emmons Glacier is the largest glacier by area. About 1.8 million people visit Mount Rainier National Park each year. Mount Rainier is a popular peak for mountaineering with some 10,000 attempts per year with approximately 50% making it to the summit. 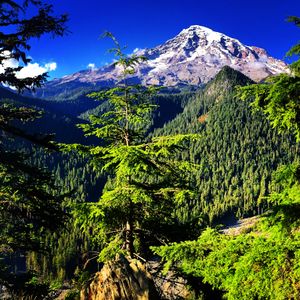 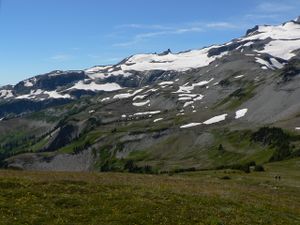 Ohanapecosh Park is one of many named subalpine areas that may be reached via the Wonderland Trail.

Ninety-seven percent of the park is preserved as wilderness under the National Wilderness Preservation System, including Clearwater Wilderness and Mount Rainier Wilderness, a designation it received in 1988. It is abutted by the Tatoosh Wilderness. The park was designated a National Historic Landmark on 18 February 1997 as a showcase for the National Park Service Rustic style architecture (or parkitecture) of the 1920s and 1930s, exemplified by the Paradise Inn and a masterpiece of early NPS master planning. As an Historic Landmark district, the park was administratively listed on the National Register of Historic Places.[6] In January 1, 2012 Park Ranger Margaret Anderson was shot dead while stopping a vehicle. The suspected assailant Benjamin Colton Barnes fled and hid in the park, prompting the authorities to close the park and launch a manhunt.[7] Barnes' body was found the following day.[8]

The earliest evidence of human activity in the area which is now Mount Rainier National Park is a projectile point dated to circa 4,000-5,800 BP (before present) found along Bench Lake Trail (the first section of Snow Lake Trail).[9][10]

A more substantial archeological find was a rock shelter near Fryingpan Creek, east of Goat Island Mountain. Hunting artifacts were found in the shelter. The shelter would not have been used all year round. Cultural affinities suggest the site was used by Columbia Plateau Tribes from 1000 to 300 BP.[9][10]

In 1963 the National Park Service contracted the Washington State University to study Native American use of the Mount Rainier area. Richard D. Daugherty lead an archeological study of the area and concluded that prehistoric humans used the area most heavily between 8000 and 4500 BP. Allan H. Smith interviewed elderly Native Americans and studied ethnographic literature. He found no evidence of permanent habitation in the park area. The park was used for hunting and gathering and for occasional spirit quests. Smith also came to tentative conclusions that the park was divided among five tribes along watershed boundaries; the Nisqually, Puyallup, Muckleshoot, Yakama, and Taidnapam (Upper Cowlitz). Subsequent studies cast doubt on Smith's theory that the tribes had agreed upon boundaries before they entered into treaties with the United States in 1854-55.[9]

The Mount Rainier Forest Preserve should be made a national park and guarded while yet its bloom is on; for if in the making of the West Nature had what we call parks in mind—places for rest, inspiration, and prayers—this Rainier region must surely be one of them. 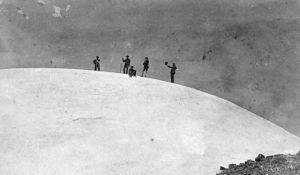 On March 2, 1899, President William McKinley signed a bill passed by Congress authorizing the creation of Mount Rainier National Park, the nation's fifth national park.[12] It was the first national park created from a national forest.[11] The Pacific Forest Reserve had been created in 1893 and included Mount Rainier. It was enlarged in 1897 and renamed Mount Rainier Forest Reserve. John Muir had visited Mount Rainier in 1888. Muir and nine others, including Edward Sturgis Ingraham, Charles Piper, and P. B. Van Trump, climbed to the summit in what became the fifth recorded ascent.[13][14] The trip to Mount Rainier had played a role in reinvigorating Muir and convincing him to rededicate his life to the preservation of nature as national parks. At the time national forests, called forest reserves at first, were being created throughout the American West, under the utilitarian "conservation-through-use" view of Gifford Pinchot. Muir was what came to be known as a "preservationist". He wanted nature preserved under the more protected status of national parks. But during the 1890s there was more public support for creating national forests than national parks. During that decade, Muir and his supporters were only able to protect one national forest as a national park. When the Pacific Forest Reserve was created in 1893, Muir quickly persuaded the newly formed Sierra Club to support a movement to protect Rainier as a national park. Other groups soon joined, such as the National Geographic Society and scientific associations wanting Mount Rainier preserved as a place to study volcanism and glaciology. Commercial leaders in Tacoma and Seattle were also in support, as was the Northern Pacific Railway. The effort lasted over five years and involved six different attempts to push a bill through Congress. Congress eventually agreed, but only after acquiring assurances that none of the new park was suitable for farming or mining and that no federal appropriations would be necessary for its management.[11]

Mount Rainier National Park closed because of extensive flooding as a result of the 6 November 2006 Pineapple Express rainstorm when 18 inches (460 mm) of rain fell in a 36-hour period. Campsites and roads throughout the park were washed away. Power to Paradise and Longmire was disrupted.[15] On 5 May 2007, the park reopened to automobile traffic via State Route 706 at the Nisqually Entrance.[16] 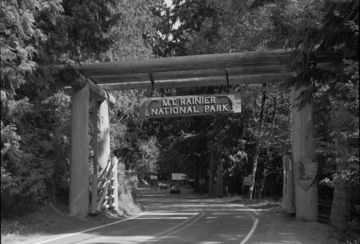 Mt Rainier from trail in park 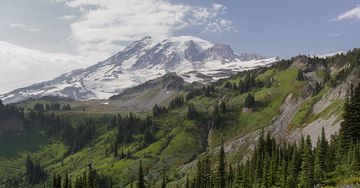 View of the south face of Mount Rainier from Skyline Trail, a hiking trail in Paradise.
Main article: Paradise, Washington

Paradise (Lua error in Module:Coordinates at line 668: callParserFunction: function "#coordinates" was not found.[18]) is the name of an area at approximately 5,400 feet (1,600 m) on the south slope of Mount Rainier in the national park. Paradise is the most popular destination for visitors to Mount Rainier National Park.[19] 62% of the over 1.3 million people who visited the park in 2000 went to Paradise.[20] Paradise, near the subalpine valley of the Paradise River, is the location of the historic Paradise Inn (built 1916),[21] Paradise Guide House (built 1920) and Henry M. Jackson Visitor Center (built 1966;[22] demolished and replaced, 2008). [23]

Under the Köppen climate classification, the park has a subarctic climate (Dfc) with a drying trend in the summer. 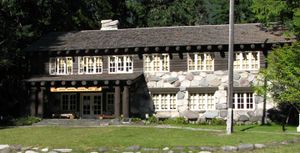 Longmire (Lua error in Module:Coordinates at line 668: callParserFunction: function "#coordinates" was not found.) is a visitor center in Mount Rainier National Park, located 6.5 miles (10.5 km) east of the Nisqually Entrance. The area is in the Nisqually River valley at an elevation of 2,761 feet (842 m)[30] between The Ramparts Ridge and the Tatoosh Range. Longmire is surrounded by old-growth Douglas fir, western red cedar and western hemlock.

Longmire is the location of Mount Rainier's National Park Inn, the Longmire Museum, and the 1928 National Park Service Administration Building, which is now a Wilderness Information Center. The National Park Inn is the only accommodation in the park open all year round.[31]

Longmire is the second most popular destination for visitors to Mount Rainier National Park after Paradise. Of the more than 1.3 million people who visited the park in 2000, 38% visited Longmire.[20] The Cougar Rock Campground is about 2 miles (3.2 km) north west of Longmire [3] with 173 individual campsites and 5 group sites and open from late May through late September. Longmire is one of the starting points of the Wonderland Trail. 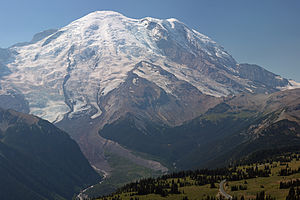 The Emmons Glacier (upper left) dominates the northeast face of Mount Rainier in the view from the subalpine meadows of Sunrise (lower right).

Sunrise (Lua error in Module:Coordinates at line 668: callParserFunction: function "#coordinates" was not found.) is a lodge and visitor center located in the northeastern part of the park. At an elevation of 6,400 feet (1,950 m), it is the highest point in the park that is accessible by vehicle. There are miles of trails located all around Sunrise, such as Mount Fremont and Sourdough Ridge. The lodge is reachable via a 10-mile (16 km) turnoff from SR 410 near the White River entrance. 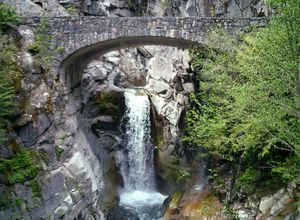 Christine Falls, one of many waterfalls visible from a short walk from the main road.

Ohanapecosh /oʊˈhænəpᵻkɔːʃ/ is a campground (with 188 individual sites and 2 group sites, open from late May through late September), visitor center (closed during the 2013 season), and ranger station located in the southeastern portion of the park, approximately 3 miles (4.8 km) from the park boundary off Highway 123. Located in a deep valley among old growth forest at an elevation below 2,000 feet (610 m), it is the only developed area of the park without a view of Mount Rainier. The Ohanapecosh Hot Springs, Grove of the Patriarchs, and Silver Falls are all located in the Ohanapecosh area.

The Carbon River Entrance Station is located in the northwest corner of the park off Highway 165 and is the site of the only rainforest at Mount Rainier. There is a campground and a short trail through the rainforest, as well as a trail to the Carbon Glacier, one of the lowest glaciers in the contiguous United States.

Mowich Lake is the largest and deepest lake in the park, located south of Carbon at the south end of Highway 165. A campground, picnic area, and hiking trail are located near the lake.

The two major roads into the northwest quadrant of the Park were severely damaged by the floods of 2006. The ranger station at the Carbon River entrance is staffed during the summer. No motor vehicles are permitted beyond that point.