Népouite is a rare nickel silicate mineral which has the apple green colour typical of such compounds. It was named by E Glasser in 1907 after the place where it was first described (the type locality), the Népoui Mine, Népoui, Nouméa Commune, Northern Province, New Caledonia. The ideal formula is Ni3(Si2O5)(OH)4, but most specimens contain some magnesium, and (Ni,Mg)3(Si2O5)(OH)4 is more realistic. There is a similar mineral called lizardite in which all the nickel is replaced by magnesium, formula Mg3(Si2O5)(OH)4.[4] These two minerals form a series, that is to say intermediate compositions are possible, with varying proportions of nickel to magnesium.[5]

Pecoraite is another rare mineral with the same chemical formula as népouite, but a different structure; such minerals are said to be dimorphs of each other, in the same way as graphite is a dimorph of diamond. Népouite, lizardite and pecoraite are all members of the kaolinite-serpentine group.[6]

Garnierite is a green nickel ore that formed as a result of weathering of ultramafic rocks, and that occurs in many nickel deposits worldwide. It is a mixture of various nickel and magnesium phyllosilicates (sheet silicates), including népouite. Associated minerals include calcite, chlorite, goethite, halloysite, nontronite, pimelite, quartz, sepiolite, serpentine, talc and willemseite.

As well as the type locality in New Caledonia, it has been found in Australia, Austria, the Czech Republic, the Democratic Republic of Congo, Germany, Greece, Italy, Japan, Morocco,[7] Poland, Russia, South Africa and the USA. 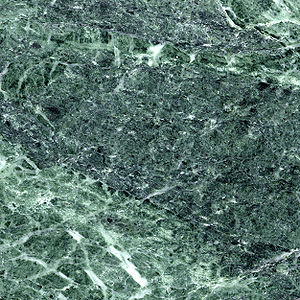 Polished serpentine, from the Oberlystal, Val d'Aosta, sold as Gressoney. Used at the United Nations building in New York.

Lizardite, which is much more common, forms a solid solution series with népouite. Extremely fine-grained, scaly lizardite (also called orthoantigorite) comprises much of the serpentine present in serpentine marbles. It is triclinic, has one direction of perfect cleavage, and may be white, yellow or green. Lizardite is translucent, soft (hardness 2.5) and has an average specific gravity of 2.57. It can be pseudomorphous after enstatite, olivine or pyroxene, in which case the name bastite is sometimes applied. Bastite may have a silky lustre.

Lizardite is named after its type locality on the Lizard Peninsula, Cornwall, UK.[8] It is worked by local artisans into various trinkets which are sold to tourists.