From Infogalactic: the planetary knowledge core
(Redirected from National Academy of Design)
Jump to: navigation, search

The National Academy Museum and School, founded in New York City as the National Academy of Design – known simply as the "National Academy" – is an honorary association of American artists founded in 1825 by Samuel F. B. Morse, Asher B. Durand, Thomas Cole, Martin E. Thompson, and others "to promote the fine arts in America through instruction and exhibition."

The Academy is a professional honorary organization, a school, and a museum. Although one cannot apply for membership, full members of the National Academy are named from the highest ranks of American artists and architects, and are identified using the post-nominal "NA" (National Academician), while associates are designated with "ANA."[1] The school offers studio instruction, master classes, intensive critiques, various workshops, and lunchtime lectures. Scholarships are available. The museum houses a public collection of over 7,000 works of American art from the 19th, 20th, and 21st centuries.

The Academy has been located at several locations over the years. Notable among them was a building built during 1863-1865, designed by architect P. B. Wight in Venetian Gothic style, which was modeled on the Doge's Palace in Venice. Another locale was at West 109th Street and Amsterdam Avenue in Manhattan.[2] Since 1942 the academy has occupied a mansion that was the former home of sculptor Anna Hyatt Huntington and Archer Milton Huntington at Fifth Avenue and Eighty-ninth Street.

Among the teaching staff were numerous artists, including Will Hicok Low, who taught from 1889 to 1892. The famous American poet William Cullen Bryant also gave lectures. Architect Alexander Jackson Davis (A.J. Davis) taught at the Academy. Painter Lemuel Wilmarth was the first full-time instructor[4] Gulian C. Verplanck, a Congressman and a man of letters, gave an address at the school in 1824.[5] and Silas Dustin was a curator.[6]

In 1824, the instructors at the National Academy of the Fine Arts included:[5] 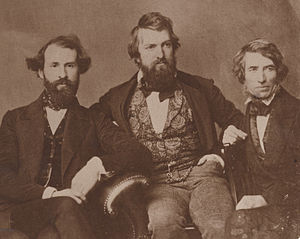 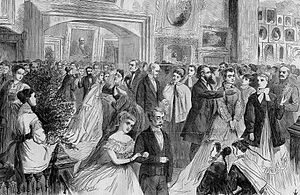 Annual Reception at the National Academy of Design, New York, 1868, a wood engraving from a sketch by W. S. L. Jewett

Some of the Academy's better-known members include: