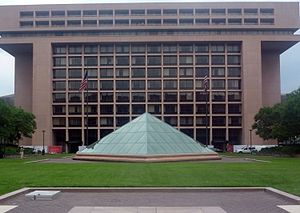 The National Transportation Safety Board (NTSB) is an independent U.S. government investigative agency responsible for civil transportation accident investigation. In this role, the NTSB investigates and reports on aviation accidents and incidents, certain types of highway crashes, ship and marine accidents, pipeline incidents and railroad accidents.[3] When requested, the NTSB will assist the military and foreign governments with accident investigation.[3] The NTSB is also in charge of investigating cases of hazardous materials releases that occur during transportation. The agency is based in Washington, D.C. As of December 2014[update], it has four regional offices located in Anchorage, Alaska, Denver, Colorado, Ashburn, Virginia, and Seattle, Washington.[4] The agency also operates a national training center at its Ashburn facility.[5]

The origin of the NTSB was in the Air Commerce Act of 1926, which assigned the United States Department of Commerce responsibility for investigating domestic aviation accidents.[6] In 1940, this authority was transferred to the Civil Aeronautics Board's newly-formed Bureau of Aviation Safety.[6]

In 1967, Congress created a separate cabinet-level Department of Transportation, which among other things established the Federal Aviation Administration as agency under the DOT.[7] At the same time, the NTSB was established as an independent agency which absorbed the Bureau of Aviation Safety's responsibilities.[7] However, from 1967 to 1975, the NTSB reported to the DOT for administrative purposes, while conducting investigations into the Federal Aviation Administration, also a DOT agency.[8]

To avoid any conflict, Congress passed the Independent Safety Board Act, and on April 1, 1975 the NTSB became a fully independent federal agency.[1][6][8] As of 2015[update], the NTSB has investigated over 140,000 aviation incidents and several thousand surface transportation incidents.[9]

Formally, the "National Transportation Safety Board" refers to a five-manager investigative board whose five members are nominated by the President and confirmed by the Senate for five-year terms.[8][10] No more than three of the five members may be from the same political party.[10] One of the five board members is nominated as the Chairman by the President and then approved by the Senate for a fixed 2-year term; another is designated as vice-chairman and becomes acting chairman when there is no formal chairman.[2][10] This board is authorized by Congress under Chapter 11, Title 49 of the United States Code to investigate civil aviation, highway, marine, pipeline, and railroad accidents and incidents.[11] This five-member board is authorized to establish and manage separate sub-offices for highway, marine, aviation, railroad, pipeline, and hazardous materials investigations.[10] Collectively, "National Transportation Safety Board", the "Safety Board" or "NTSB" is used to refer to the entire investigative agency established and managed by this five-member board.[8] As of December 2015[update], Christopher A. Hart is Chairman of the NTSB, and T. Bella Dinh-Zarr is Vice-Chairman. The board also includes Robert L. Sumwalt and Earl F. Weener, and has one vacant seat.[2]

The NTSB is the lead agency in the investigation of a civil transportation accident or incident within its sphere. An investigation of a major accident within the United States typically starts with the creation of a "go team," composed of specialists in fields relating to the incident who are rapidly deployed to the incident location.[4] The "go team" can have as few as 3-4 people or as many as a dozen, depending on the nature of the incident.[4] Following the investigation, the agency may then choose to hold public hearings on the issue.[4] Ultimately, it will publish a final report which may include safety recommendations based on its findings. The NTSB has no legal authority to implement or impose its recommendations, which must be implemented by regulators at either the federal or state level or individual transportation companies.[12]

Significant investigations conducted by the NTSB in all modes of transportation in recent years include the collapse of the I-35W highway bridge in Minneapolis, Minnesota; the collision between two transit trains in Washington, D.C.; the pipeline explosion that destroyed much of a neighborhood in San Bruno, California; the sinking of an amphibious vessel in Philadelphia; and the crash of a regional airliner near Buffalo, New York.

As of 2014[update], the NTSB has issued about 14,000 safety recommendations in its history, 73 percent of which have been adopted in whole or in part by the entities to which they were directed.[9] Starting in 1990, the NTSB has annually published a "Most Wanted List" which highlights safety recommendations that the NTSB believes would provide the most significant — and sometimes immediate — benefit to the traveling public.[1][9]

Among transportation safety improvements brought about or inspired by NTSB recommendations:

Multi-Modal
Alcohol and drug testing in all modes of transportation.

A little-known responsibility of the NTSB is that it serves as a court of appeals for airmen, aircraft mechanics, certificated aviation-related companies and mariners who have their licenses suspended or revoked by the FAA or the Coast Guard. The NTSB employs administrative law judges which initially hear all appeals, and the administrative law judge's ruling may be appealed to the five-member Board.[15] The Board's determinations may be appealed to the federal court system by the losing party, whether it is the individual or company, on the one hand, or the FAA or the Coast Guard, on the other.[15] However, the NTSB's determinations will not be overturned by the federal courts unless the NTSB abused its discretion, or its determination is wholly unsupported by the evidence.[16]

The Safety Board maintains a training academy[5] in Ashburn, Virginia, where it conducts courses for its employees and professionals in other government agencies, foreign governments or private companies, in areas such as general accident investigation, specific elements of investigations like survival factors or human performance, or related matters like family affairs or media relations. The facility houses for training purposes the reconstruction of more than 90 feet of the TWA Flight 800 Boeing 747,[17] which was recovered from the Atlantic Ocean after it crashed on July 17, 1996, following a fuel tank explosion.