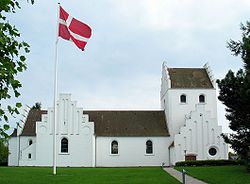 A Church of Denmark parish church in Holte, with the Dannebrog flying in its kirkyard

A National church is a Christian church associated with a specific ethnic group or nation state. The idea was notably discussed during the 19th century, during the emergence of modern nationalism.

Samuel Taylor Coleridge, in a draft discussing the question of church and state around 1828 wrote that

"a National Church might exist, and has existed, without [Christianity], because before the institution of the Christian Church - as [...] the Levitical Church in the Hebrew Constitution, [and] the Druidical in the Celtic, would suffice to prove".[1]

John Wordsworth, bishop of Salisbury, wrote about the National Church of Sweden in 1911, interpreting the Church of Sweden and the Church of England as national churches of the Swedish and the English peoples, respectively. Lake (1987) traces the development of Presbyterianism in 16th-century England from the status of a "godly minority" which saw itself surrounded by the corrupt or hostile mass of the population, into a "genuine national church".[2]

Karl Barth denounced as heretical the tendency of "nationalizing" the Christian God, especially in the context of national churches sanctioning warfare against other Christian nations during World War I.[31]