The Constitution of the State of Nevada is the organic law of the state of Nevada, and the basis for Nevada's statehood as one of the United States.

The Nevada Constitution was created in 1864 at a convention on July 4 in Carson City. The convention adjourned on July 28, was approved by public vote on the first Wednesday in September, and became effective on October 31, when on that date President Abraham Lincoln declared Nevada to be a state. 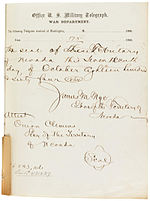 Signature page for the telegraph transmission of the first Nevada State Constitution, October 1864. The handwritten annotation shows the word count (16,543) and cost ($4303.27).

Nevada's entry into full statehood in the United States was expedited. Union sympathizers were so eager to gain statehood for Nevada that they rushed to send the entire state constitution by telegraph to the United States Congress before the presidential election and they did not believe that sending it by train would guarantee that it would arrive on time. The constitution was sent October 26–27, 1864,[1] just two weeks before the election on November 7, 1864. The transmission took two days; it consisted of 16,543 words and cost $4,303.27 ($62,295.77 adjusted for 2012) to send.[1][2] It was, at the time, the longest telegraph transmission ever made, a record it held for seventeen years, until a copy of the 118,000-word English Standard Version of the New Testament was sent by telegraph on May 22, 1881.[3]

The document has two prefix provisions; a preamble; 19 articles (one having been repealed); and a suffix provision. The first prefix provision defines the requirement that the state have a constitutional convention. The second prefix provision declares certain mandates applicable to the state, including a prohibition on slavery, religious freedom, and declaring the public lands to be property of the United States. Later amendments changed this provision. The preamble reads: "We the people of the State of Nevada Grateful to Almighty God for our freedom in order to secure its blessings, insure domestic tranquility, and form a more perfect Government, do establish this Constitution."

The articles of the Nevada Constitution are:

The suffix provision provides for the election of delegates to the constitutional convention.

Ownership of the public domain by the United States has become controversial in recent years, the Sagebrush Rebellion and the Bundy standoff are examples of certain groups within the State desire to locally manage the public lands within their borders.

The clause disclaiming any right to unappropriated lands originally stated:

After an amendment ratified in the general election of 1996, the clause reads:

The amendment is specified to take effect "on the date Congress consents to amendment or a legal determination is made that such consent is not necessary".[needs update][4]

Miscellaneous (Not All) provisions