The New York State Department of Transportation (NYSDOT) is the department of the New York state government[3] responsible for the development and operation of highways, railroads, mass transit systems, ports, waterways and aviation facilities in the U.S. state of New York.

Its regulations are compiled in title 17 of the New York Codes, Rules and Regulations.

The history of the New York State Department of Transportation and its predecessors spans over two centuries: 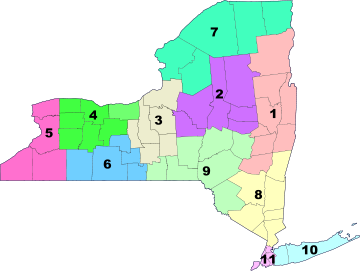 The department comprises 11 regional offices and 68 county transportation maintenance residencies. Tioga County was moved to adjacent region in August 2007, Wayne County was moved from Region 3 to Region 4 in the late 1990s.

NYSDOT regions and the counties they serve are:

Region 1 is also the home to the NYS DOT STICC (Statewide Transportation Information Coordination Center), manned 24/7, STICC is responsible for the coordination & logistics of statewide resources during major incidents within New York State and is currently located on the 1st floor of the DOT Headquarters in Colonie, NY.