Newent (originally called "Noent") is a small market town about 8 miles north west of Gloucester, on the northern edge of the Forest of Dean, and lying within the Forest of Dean Local Authority District in Gloucestershire. Its population at the 2001 census was 5,073, increasing to 5,207 at the 2011 census.[1] The town includes a half-timbered market house, other houses of historical nature, and the site of the former small Victorian museum, the Shambles, containing a replica of a 19th-century street has been transformed and now real local traders occupy the once replica shops. There has been a settlement here since at least Roman times and the town first appeared in the Domesday Book.

Newent's church, St Mary's, dates from the 13th century but the site has been used since the Anglo-Saxon period. St Mary's Church has stained glass windows from the famous company of Clayton and Bell.

Newent is home to the Devonia, a large house dating back to the Georgian period.

Newent was served by the Herefordshire and Gloucestershire Canal, which opened between Gloucester and Ledbury in 1798. The canal closed on 30 June 1881 and the section between Ledbury and Gloucester converted into a railway line. This line, which was a branch of the Great Western Railway, opened on 27 July 1885.[2] The original course of the canal between Dymock and Newent was by-passed as it was decided not to take the line through the 2,192 yard Oxenhall Tunnel. Newent had a station on this line. The line closed in 1959, but the canal (including the tunnel), is now being restored. Today the nearest station is Ledbury on the Cotswold Line. 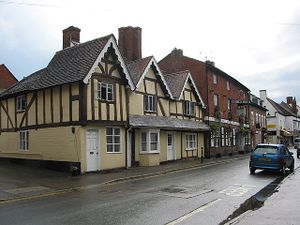 Newent is home to the National Birds of Prey Centre, located just east of the neighbouring village of Cliffords Mesne, a vineyard (The Three Choirs), and is at the centre of the Golden Triangle, so called because of the preponderance of daffodils in the surrounding area.

The town holds an onion fayre each September, at which there are competitions for growing onions and for eating onions.

Educational commissioners during the reign of Edward VI (1547–53) noted the lack of educational opportunities in Newent. Gloucestershire commissioners reported that Newent was a market town with over 500 inhabitants but "all the youth of a great distance therehence rudely brought up and in no manner of knowledge and learning, where were a place meet to ... erect a school for the better and more godly bringing up of the same youth".[4] Newent is now served by two/three schools, all within the town. The federation of Glebe Infant School and Picklenash Junior School. Newent Community School provides both secondary and tertiary education for ages 11 upwards.