The Nova Scotia Legislature, consisting of the lieutenant governor (sometimes referred to as the governor) and the House of Assembly,[2] is the legislative branch of the provincial government of Nova Scotia, Canada. The assembly is the oldest in Canada, having first sat in 1758,[3] and in 1848 was the site of the first responsible government in a colony of the British Empire.

The assembly meets in Province House. Located in Halifax Province House is a National Historic Site and Canada's oldest and smallest legislative building. It opened on February 11, 1819. The building was also the original home to the Supreme Court of Nova Scotia, and the location of the "Freedom of the Press" trial of Joseph Howe. Its main entrance is found on Hollis Street in Halifax. 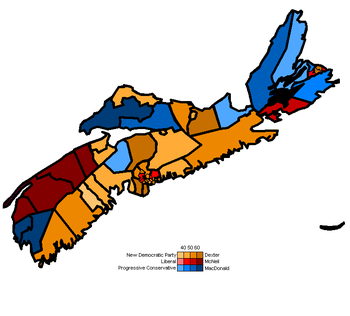 Committees of the Whole House