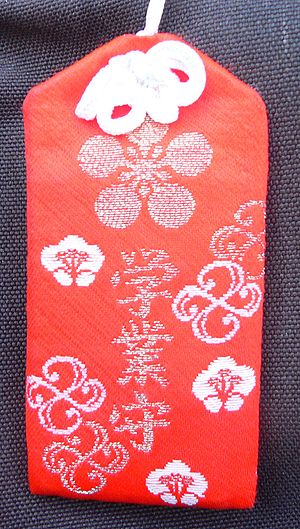 A study-dedicated omamori. The logo above denotes a Shinto shrine dedicated to the kami Tenjin 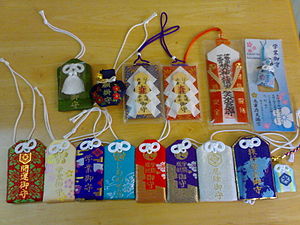 Omamori (御守 or お守り, omamori?) are Japanese amulets (charms, talismans) commonly sold at religious sites and dedicated to particular Shinto deities as well as Buddhist figures, and are said to provide various forms of luck or protection.

The word mamori (守り) means protection, with omamori being the sonkeigo (honorific) form of the word, "to protect". Originally made from paper or wood, modern amulets are small items usually kept inside a brocade bag and may contain a prayer, religious inscription of invocation.[1] Omamori are available at both Shinto shrines and Buddhist temples with few exceptions and are available for sale, regardless of one's religious affiliation.

Omamori are then made sacred through the use of ritual, and are said to contain busshin (spiritual offshoots) in a Shinto context or kesshin (manifestations) in a Buddhist context.[1]

While omamori are intended for temple tourists’ personal use, they are mainly viewed as a donation to the temple or shrine the person is visiting. Visitors often give omamori as a gift to another person as a physical form of well-wishing.[2]

The amulet covering is usually made of brocaded silk and encloses papers or pieces of wood with prayers written on them which are supposed to bring good luck to the bearer on particular occasions, tasks, or ordeals. Omamori are also used to ward off bad luck and are often spotted on bags, hung on cellphone straps, in cars, etc.

Omamori have changed over the years from being made mostly of paper and/or wood to being made out all types of materials nowadays (i.e. bumper decals, bicycle reflectors, credit cards, etc.).[3] Modern commercialism has also taken over a small part of the creations of omamori. Usually this happens when more popular shrines and temples cannot keep up with the high demand for certain charms. They then turn to factories to manufacture the omamori. However, priests have been known to complain about the quality and authenticity of the products these factories produce.[3]

Japanese have probably always believed in amulets of one type or another, but the modern printed charms now given out by shrines and temples first became popular in the Tokugawa period or later, and the practice of wearing miniature charms on one’s person is also new. The latter custom is particularly common in cities.[4]

File:Omamori Study.jpg
Another study-dedicated omamori, gakugyō-jōju, in a keychain
File:Omamori Protection.jpg
An omamori from a shrine in Kumamoto. This item claims to "grant protection" to the user. The logo above denotes the shrine Fujisaki Hachimangū

Omamori may provide general blessings and protection, or may have a specific focus such as:

Customarily, omamori should never be opened in order to avoid losing their protective benefits, and should be carried on one's person, or tied to a backpack, purse, etc. Amulets are replaced once a year to ward off bad luck from the previous year. Old amulets are usually returned to the same shrine or temple they were purchased at so they can be disposed of properly. It is most common for amulets to be returned on or slightly after New Year’s. This way the shrine/temple visitor has a fresh start for the New Year with a new omamori.

Throwing an amulet in the trash is also highly discouraged. Old omamori should not be placed in trash with other commonly discarded rubbish, but rather treated with respect. Usually they are burned. Burning the old amulet is meant to be a sign of respect to the deity that helped out the person throughout the year.[5]

If a shrine or temple visitors cannot find an omamori that meets their need they can request from a priest to have one made special for their area of particular concern. If enough people request for this same type of omamori, the temple or shrine may start producing them for everyday availability.

There are modern commercial versions for these that are typically not spiritual in nature and are not issued by a shrine or temple. It has become popular for stores in Japan to feature generic omamori with popular characters such as Mickey Mouse, Hello Kitty, Snoopy, Kewpie, etc.